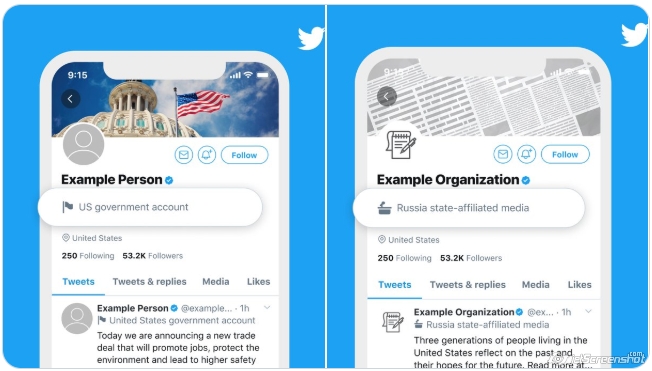 Twitter is going to start labeling state-run news organizations as such, it announced on last Thursday. It will also explicitly label the accounts of those outlets’ editors-in-chief and their senior staffers, as well as “key government officials, including foreign ministers, institutional entities, ambassadors, official spokespeople, and key diplomatic leaders.”

“State-affiliated media is defined as outlets where the state exercises control over editorial content through financial resources, direct or indirect political pressures, and/or control over production and distribution,” Twitter’s blog post about the change says. “Unlike independent media, state-affiliated media frequently use their news coverage as a means to advance a political agenda. We believe that people have the right to know when a media account is affiliated directly or indirectly with a state actor.”

That means that Russia’s RT and China’s Xinhua News will get the label, while the United Kingdom’s BBC and NPR in the United States will not because they’re publicly funded institutions with editorial independence.

On labeling government officials, Twitter will start with permanent members of the United Nations Security Council: the United States, the United Kingdom, China, France, and Russia. However, it won’t label personal accounts for politicians and high-ranking officials. So @realDonaldTrump, the account the United States president actually tweets from, won’t get the label, but @POTUS will. That’s because “these accounts enjoy widespread name recognition, media attention, and public awareness.”