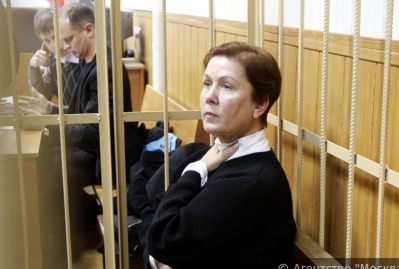 A Moscow court on Jan 27 extended for a further 3 months the house arrest imposed on Natalya Sharina, Director of the Ukrainian Literature Library in Moscow.  The application for the 58-year-old librarian to be at least allowed short walks so that she could walk to a clinic was turned down.  Her lawyers had stressed the need for both exercise and a medical examination and say that she has constant problems with high pressure, Halya Coynash writes for Human Rights in Ukraine.

Sharina is accused of “circulating extremist literature”, yet her lawyers point out that the investigators have not explained what specific actions she is accused of.  The investigators claimed that they still need to question some witnesses and receive ‘cultural-linguistic’ and psychological assessment on books, and some other investigative activities.  None of this justifies her continued house arrest yet judge Yevgeny Naidenov went along with the application, as do Russian judges almost without exception these days.

Sharina was recognized as a political prisoner by the Memorial Human Rights Centre back in November 2015.  According to her lawyer Ivan Pavlov, as a political prisoner she was recently given 100 thousand roubles by the Khodorkovsky and Navalny Assistance Fund.  Pavlov explained that she would be giving the money to the staff of the Ukrainian Literature Library who had their salaries slashed just before New Year and believe they may lose their jobs altogether in this latest, most ferocious, attack on the Ukrainian library in Moscow.

As reported, on Oct 28, armed OMON police officers carried out searches of the Ukrainian Literature Library in Moscow, Sharina’s home, as well as that of the Head of the Association of Ukrainians of Russia, Valery Semenenko.  Sharina was taken into custody.

The following day Russia’s Investigative Committee reported that the 58-year-old librarian was accused of ‘inciting national enmity or hatred, and also denigrating human dignity” (Article 282 § 2b of the Russian Criminal Code).  The charges can carry a sentence of up to 5 years imprisonment. The Investigative Committee asserted that from 2011-2015, Sharina, as Director of the Ukrainian Literature Library, “circulated among visitors books by Dmytro Korchynsky designated by the court as extremist material and prohibited for use”.

The Investigative Committee also claimed that printed matter containing “calls to anti-Russian state and anti-Russian propaganda” had been removed.  There is no information as to what this was, and the library staff clearly believe only one book by Korchynsky, which was not in the library, was purportedly ‘found’.

Memorial HRC notes that Korchynsky himself on many occasions addressed a pro-Kremlin youth camp in the Moscow region during the 2000s.  He and his ‘Bratstvo’ organization are fairly notorious in Ukraine as provocateurs, and are suspected, with cause, of having been used to provoke police backlash in the recent past.

Only one book by Korchynsky is on Russia’s substantial list of ‘extremist’ materials, so the Investigative Committee’s mention of ‘books’ is already manipulative.  Books about Holodomor 1932-33 as genocide are indeed on the ‘extremist material’ list, but so too is a pivotal work by Rafael Lemkin, the renowned lawyer most famous for first using the term genocide.

The program and prosecution of the Director of the Ukrainian Literature Library suggest that there is no let-up in what Memorial referred to as “the anti-Ukrainian campaign continuing since Spring 2014 in the state-run media and in utterances made by public officials holding high posts in the Russian Federation’s leadership.  One of the parts of this campaign is to initiate criminal cases against citizens publicly expressing a position on what is happening in Ukraine that differs from the official position or in any way linked with Ukraine”