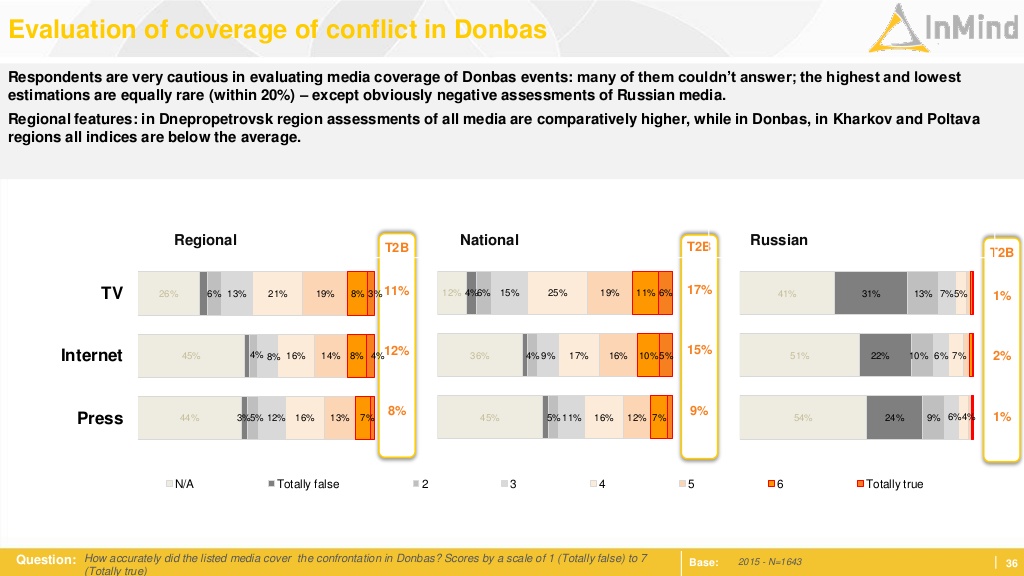 Internews’ annual media consumption survey shows a dramatic drop in Ukrainians’ use of Russian media. The survey shows that Russian TV viewership shrank to 8% from 27% in 2014,[1] and Russian internet use slid to 27% in 2015 from 44% in 2014.

While lower consumption rates for Russian TV might be partially explained by the Ukrainian government’s initiative to ban transmissions of Russian TV signals within the country, internet access has not been restricted.

Trust in Ukrainian media up, down in Russian media

The most evident dynamic in 2015 was the decrease in trust of Russian media of all types.

Ukrainians care a lot about honesty and reliability in the news – it’s their top priority, with 46% putting it in first place. While overall trust in Russian media is declining, trust in Ukrainian media has improved since last year.

However many Ukrainians became more critical of the overall quality of the news they have access to (in terms of objectivity and providing opposing viewpoints to provide balance). Compared to 2014, there was an 8% decrease in the number of people who said they were satisfied with the objectivity of TV news.

The public’s ability to distinguish jeansa (stories sponsored by and often written by political parties and businesses and published in the media as news stories) did not change over the last year; 49% of respondents said they were aware of jeansa in media content and 57% of those people said they could distinguish jeansa from regular media content (about 28% of all respondents). The complete Internews/InMind survey in English can be found at  http://www.slideshare.net/umedia/internews-media-audience-survey-2015.

Ukrainians traditionally depend on television for their news, but in the past year TV news viewership (both national and regional) declined; 85% of those surveyed watch TV news regularly, a drop of 8% (national networks), while 79% watched regional network newscasts, a drop of 9% from 2014.

Older age groups watch more TV news than younger age groups; 93% of those aged 46 to 55 and 95% of those in the age group 56 to 65 get their news primarily from television. Young people in the age range of up to 25 prefer online social networks (like VKontakte and Odnoklassniki) for news (80%) rather than TV (66%), and they consume news via online news sites (63%), but rarely read newspapers (17%).

Overall, the use of the internet to get news (as opposed to entertainment) increased by 6% in 2015; 51% of respondents in 10 regions visit news websites regularly.

The most popular online social networks, as in 2014, are the Russian sites VKontakte and Odnoklassniki, regularly visited by 38% and 31% of surveyed internet users respectively. Facebook is a source of news for 20% of internet users in Ukraine.

The poll was conducted with a sample size of 4,048, including 300 respondents or more in each of 12 oblasts – Kyiv, Lviv, Vinnytsia, Poltava, Sumy, Odesa, Mykolaiv, Kherson, Zaporizhzhia, Dnipropetrovsk, Donetsk, and Kharkiv. A smaller number of respondents in the remaining regions were added to provide a national picture. Donetsk and Luhansk interviews were held in areas under the control of the Ukrainian government.

The comparison of 2014 and 2015 results are restricted to the 10 control regions surveyed in both years – Kyiv, Vinnytsa, Donetsk (under control of the Ukrainian government), Lviv, Mikolaiv, Odesa, Zakarpattya, Sumy, Kharkov, and Cherkasy.