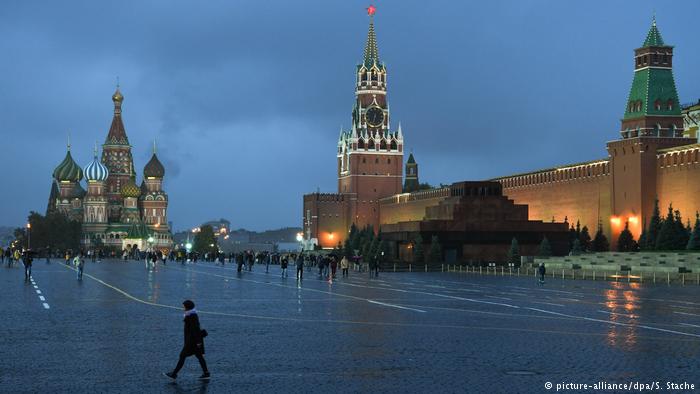 By Roman Goncharenko, for DW

The US government is set to present its “Kremlin Report” to Congress detailing oligarchs’ close ties to President Vladimir Putin. Whose names will appear in the document and will its release result in new sanctions? One week before “day zero,” political heavyweights in Russia have gone on the offensive. President Vladimir Putin’s spokesman Dmitry Peskov said in a Sunday interview that the government and the president had “taken all necessary precautions.” On the same day, Foreign Minister Sergey Lavrov agreed that his country’s foreign policy was supported by the Russian people and that any attempt to change that, “by putting pressure on the country’s elite,” was doomed to failure.

For weeks, Russians have been wondering what exactly will appear in the so-called Kremlin Report that the US government is set to present to Congress on January 29.

When Congress passed sanctions against Washington’s adversaries Russia, Iran and North Korea in the summer of 2017, lawmakers added a built-in time bomb to those measures affecting Russia. They ordered the secretary of the treasury to deliver a detailed report to Congress no later than 180 days from the date on which the bill was passed. That deadline is approaching – whether intentional or not – in the middle of Russia’s presidential election campaign. Observers agree that Kremlin boss Vladimir Putin will, in all likelihood, be victorious in the March vote. The report takes aim at the elites that have loyally supported him.

The sanctions bill was part of Washington’s response to Russian activity in Ukraine — and even more so — to Russian attempts to meddle in the 2016 US presidential election; an accusation that Moscow denies. The Kremlin Report will likely exceed everything that has so far transpired in the worsening sanctions spiral that began with the Russian annexation of Crimea in 2014. The report aims to put the entirety of Russia’s financial elite under the magnifying glass, meticulously listing individuals according to their wealth and proximity to the Kremlin. The criteria are formulated in broad terms. Authorities are looking at wealth, business dealings and relatives — parents, wives, children and siblings.

Those affected are not just oligarchs currently close to the Kremlin but also those who held sway previously. Moreover, Russian connections to top-level US businesses are also to be described in detail and the effect of possible sanctions evaluated. The report is due to be partially published, with the rest remaining classified.

Clues from the ‘Panama Papers’

A number of Russian media outlets have speculated that as many as 50 oligarchs and their relatives could be named. That would suggest as many as 300 people. Other sources have said that tens of thousands of names could appear.

Daniel Fried of the Atlantic Council, a Washington-based think tank, believes the list will not be quite that long. “This is not simply about wealthy Russians, but rather those who have ties to Putin,” he said. “Putin’s inner circle and his business dealings will be laid open in the report, and he cannot do anything to stop it from happening.” Fried previously worked at the State Department coordinating sanctions policy.

Fried’s Atlantic Council colleague Anders Aslund, an expert on the US economy, is convinced that the report will not simply provide already known names but will instead present of a number of previously unnamed oligarchs. Moreover, Aslund suggests that the report will contain two new groups. One, he says, will include those people who “keep cash for Putin,” like cellist Sergei Roldugin, a longtime friend of the president from his days in Saint Petersburg. Roldugin’s heretofore unknown billions came to light when the “Panama Papers” were published in 2016. Aslund says the other group will likely consist of the children of Putin associates, many of whom have received lavish payments and been awarded lucrative government posts. Aslund says the aim of the Kremlin Report is to divide Russia’s elites. Roldugin (left) is a longtime friend of Putin

The end of an era?

Renowned Moscow foreign policy expert Lilia Shevtsova believes the report will sow discontent and doubt. Nevertheless, she does not foresee the oligarchs rebelling against Putin. The Kremlin Report will “end a 20-year geopolitical era” which has seen Russian elites simultaneously “integrating into the West, while at the same time railing against it,” Shevtsova said. “The model was to make money in Russia and then to spend it in the West with the help of lobbyists.” According to her, that system has become untenable and the report is the basis for a new US deterrence policy toward Russia.

Although the report does not directly call for sanctions, Fried noted, it will nonetheless make life more difficult for those touched by it. “I think the report will raise the possibility that others will be added to it in the future,” he said. “And that will lead to image problems for Western businesses and banks should they continue working with those people.”

A conundrum for Russia’s elites

Aslund points to the fact that Putin met with top managers twice last year — in September and December as opposed to one customary year-end meeting — as evidence of just how seriously Moscow takes the report. Furthermore, he says that there were many more people in attendance than is usually the case. Another indicator of the nervous demeanor of Russian elites is the skyrocketing number of Russian businessmen applying for residency permits for themselves and their families in Malta, an EU member state.

A portion of Russia’s financial elite seems to be facing a dilemma: Namely, whether to repatriate cash back to Russia from abroad to protect it against sanctions, or to do exactly the opposite and flee to the West. Both seem to be happening at the moment, according to Russian and Western business circles.

In reality, however, it is not just Russia’s elites that will be affected by possible US sanctions. Washington is weighing the option of going after Russian arms manufacturers as well. Greece’s powerful Alpha Bank, for instance, recently announced it would cease doing business with Russian arms companies out of respect for US sanctions. Russian media outlets are reporting that the Kremlin is in the midst of creating a new state-run bank as a way to protect the country’s arms industry from sanctions. That is just one of the precautionary measures that Putin spokesman Peskov was referring to.

By Roman Goncharenko, for DW