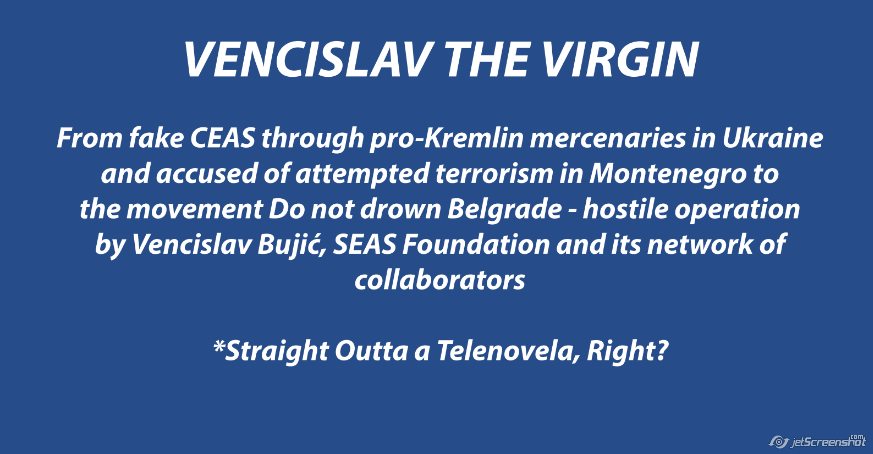 The PDF of project is here.

The aim of this project we conducted outside of project activities is to draw your attention to the illegitimate and hostile activities mentioned Bujić and his associates to be vigilant and help identify if something happens to you, your partners or organizations whose activities you support.

VENCISLAV THE VIRGIN case study is made on the basis of data from publicly available sources. We have documented years of hostile action against CEAS from phishing via other illegitimate (and possibly illegal) activity until the registration before Serbian authorities, organization Foundation SEAS. The name, the abbreviations in Cyrillic and Latin alphabets, logo, parts of the statute, combined with his Facebook and other public activities and communication challenges, in our view, a deliberate misleading others in terms of our organization. CEAS has already warned about this, our contacts and competent authorities in Serbia. Bujić since the end of 2017 moved to the frontal Vilify-and-Amplify operation against CEAS Director Jelena Milić and CEAS, very similar to what we have gone through during 2015-2016. year that we reported in a similar study “Vilify and Amplify – From Serbian and Russian trolls factories to Serbian and Russian pro-government media Vilify and Amplify campaign of discrediting CEAS and its Director Jelena Milic.”

As many of you know, the Center for Euro-Atlantic Studies from Belgrade (CEAS) since its establishment in 2007, in Serbian public space, was faced with inaccurate or malicious reporting (mainly by various tabloids, as well as parts of the security system and / or right-wing and nationalist organizations and anti-Hague lobby) and commenting on our work. This is not surprising, having in mind that we are dealing with very sensitive issues such as the causes, the occasion and consequences of NATO bombing of Yugoslavia; Death of the soldiers in Topčider and Leskovac; advocate for Serbian membership in NATO, advocacy of war crimes trials before domestic courts and the implementation of other mechanisms of transitional justice, emphasizing the obligations and the importance of cooperation with the ICTY, by encouraging normalization of relations with Kosovo and regional cooperation; comprehensive reform of the security system and its placement under the democratic control and the strengthening of Russian influence in Serbia and the Western Balkans. CEAS Director Jelena Milić even before, because of her
involvement in the Helsinki Committee for Human Rights in Serbia, the Resistance movement and the
International Crisis Group and individual public appearances, have gone through a series of unpleasant
experiences.

The dynamics of attacks and intimidation has reached a new level after the CEAS in February 2016 held a conference “Serbia and Russia: The Russian influence on the stabilization, democratization and European integration of Serbia,” which announced the publication of “Eyes Wide Shut: Strengthening of 2 CHRONOLOGY OF PHISHING AND OTHER HOSTILE ACTIVITY OF THE MENTIONED PERSONS AND ORGANIZATIONS the Russian Soft Power in Serbia – goals, instruments and effects” on the strengthening of Russia’s soft power in Serbia. We pointed out the hope that our findings will help colleagues from Montenegro in their former campaign for entry into NATO. Although, we have never gone through anything like what we documented in VENCISLAV THE VIRGIN. Network of Bujić contacts, associates and scope of the operations carried out beyond the hostile activities against the CEAS. This case study includes Bujić activities such as: the formation of a fake CEAS; contacts and communication with the pro-Kremlin mercenaries in Ukraine; charged with attempted terrorism in Montenegro; communication with associates of the obscure Serbian magazine Tabloid; connection with the self-proclaimed Republican Party, which is registered in Serbia by compromised Nikola Sandulović, to cooperation of the registration of fake CEAS in which chairman is the former activists and of the Republican Party, and now an active member of the initiative Do not drown Belgrade – Miloš Injac.

Bujić modus operandi and contacts, as well as the fact that CEAS is one of his major targets, are indicating that it was probably pro-Kremlin operation. CEAS will continue to monitor the activities of Bujić networks, because of us, but also because of general trends and possible further implications.

Unfortunately, although the CEAS has long been warning of an alarming hostile operation of Bujić and others, none of the competent Serbian authorities, media and colleagues from civil society organizations did not respond and do not pay attention to them. CEAS will try to protect with legal measures, but our past experience with non-prosecuted criminal charges for criminal offenses – disorderly conduct, endangering, racial and other discrimination, attacks on the CEAS website, we have submitted through our legal representative, does not make us optimistic.

By Center for Euro-Atlantic Studies CEAS