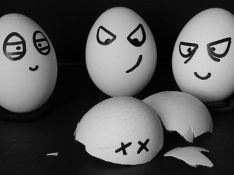 Only 25 to 30 percent of Russians actively profession Putin’s national-patriotic ideology, but far fewer, ten to 15 percent are “convinced liberals, Leonty Byzov says. This division, far deeper than in the past, means that “a virtual civil war” is going on in Russia, one that could in a short time explode,

Those in between the two groups, the senior scholar at the Moscow Institute of Sociology says, for the time being accept “the cult of national ties” that Vladimir Putin has promoted; but they oppose any tightening of the screws on their lives even if they have nothing against actions against political parties or dissidents (rosbalt.ru/main/2015/08/08/1426744.html).

The “external unity” of Russian society shown by polls is deceptive, Byzov continues. There is broad agreement on foreign policy but that does not mean that “there exists in society a deep split” at the same time. In the 1990s, there wasn’t such external unity; but the disagreement was not as deep either.

Today, however, Byzov says, “a division about values has emerged between the majority and the minority, and this is very concerning because there is the view that the minority’s opinion can be ignored as long as the majority is ‘for.’ But this minority represents the most active, educated, and intellectual part of society, the so-called creative class.”

As for the majority, he says, “it is made up of a small nucleus of convinced conservatives and the conformist part of society,” people who are accustomed to following the party line but who are not “conservatives by conviction.” They will shift with the winds: That is why in Soviet times, only seven percent said they were believers, while 80 percent do now.

This majority supports the regime but it opposes anything that directly affects it. A political tightening of the screws is fine with its members, Byzov says. “But try to tighten the screws on it” and people will get upset “because they do not want that the authorities get involved in their private lives, force them to pay taxes” or do anything else they don’t want to do.

The “conservative” majority “values personal freedom: to work or not to work, to buy or not to buy, to live where and how it wants.” As far as the freedom of parties, speech or the media are concerned, that is a matter of indifference for them. Thus, there is a line the regime cannot cross without high risks.

The powers that be feel this and feel themselves to have entered a zone of “heightened turbulence.” But they don’t know how to change policies or initiate a dialogue between the two groups. As for the population, most are prepared to wait things out and to take what the official media says on trust even though they have access to alternative sources of information.

Some people suggest that Russians always prefer order to freedom, but “in fact,” while many say they prefer order, they do not reject freedom as a value. The only difference is this: liberals say it is one of the three most important values, while conservatives list freedom only in fifth place.

“History teaches that a sense of order can disappear among [Russians] in a single day.” It happened in 1917 and it happened again in 1991, in both cases enormous enthusiasm for the regime disappeared and became the most hostile anger at it. “The very same thing may happen tomorrow as well.”

Byzov continues: “the transition to chaos in Russia is very rapid, massive and always takes on the character of collapse. Now, according to the findings of sociologists, nothing points to that. But this does not mean that it cannot occur in principle, for example, under the impact of external causes.”

What is occurring already, he says, “can be called ‘a revolt on one’s knees.” Many express dissatisfaction, “but no one is rushing to the barricades. Why? The conformist majority as a rule always is ready to support the authorities because it has nothing else to count on.” Those who are better off are more politicized.

But pushing off the date of reckoning is not a good strategy, he suggests. “revolts are needed; what matters is their nature. History shows that the longer stability passing into stagnation continues, the stronger will be the shocks at the exit from this period.”

“The authorities will not always be strong, and as soon as they show their weakness, that will become a catalyst for all possible contradictions,” Byzov says. Moreover, in that situation, “the colossal energy of collapse will arise.”