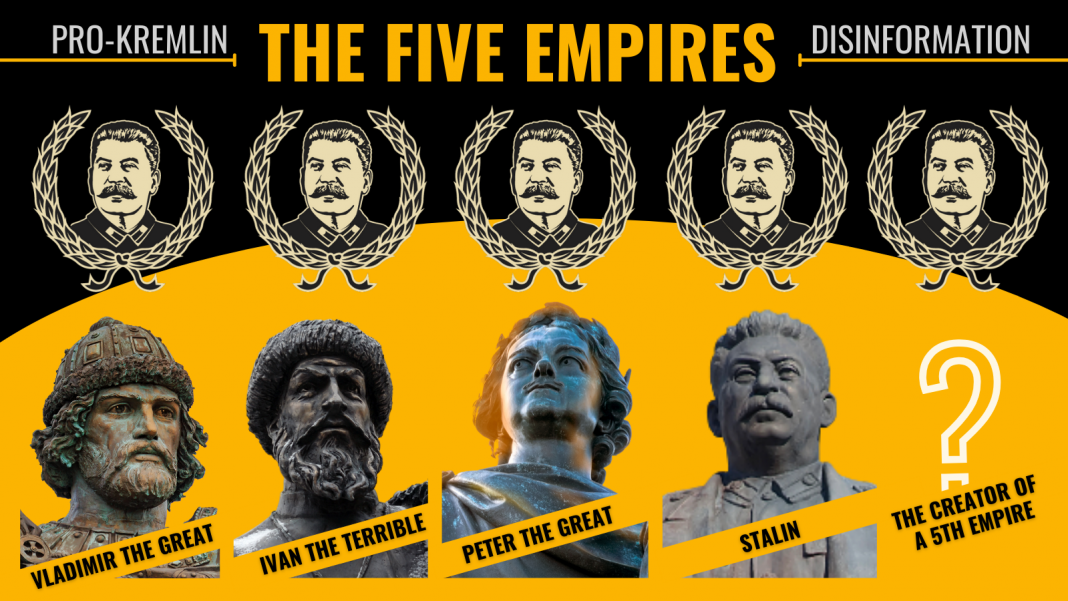 “Russian superiority” is a special strand of disinformation. There is nothing wrong with pride in your own nation, your people, leaders, history, victories, achievements… The issue appears when a nation, people or creed is defined as superior to others. The EUvsDisinfo database contains numerous examples of claims on Russian superiority in space engineering, economic policy, weapon systems, civic liberties and combatting the COVID-19 pandemic. Western women are less feminine and the men are weak. Russia is simply more spiritually advanced than the consumerist West.

Russian veteran nationalist writer Aleksandr Prokhanov excels in a display of the myth of Russian superiority. Russia is not just a country, not just a great country: Russia has a Mission from Above:

Russia is the soul of the world. The Russian dream is to aim for the divine heights, to harvest from those heights the energy of light and love and to share those ennergies (sic!) with the rest of humankind. That is Russia’s mission at all times, when she has taken upon herself the darkness of the world and changed it to light.

Prokhanov describes Russia’s glorious past and bright future. The only thing not so great, is the present. But that will pass.

Waiting was the fundamental element of Soviet life. Waiting was a part of everyday life: waiting in line for a rare materialisation of beef or bananas in the grocery shop, waiting for access to housing or luxury items like a telephone or TV-set. Waiting was also the key part of the Soviet ideology: waiting for Communism; for a world of plenty, for a life of ease. The Soviet leaders appealed to the patience of the people: “Yes, it’s rough now, but soon we will live in Communism. Just wait a little!”

Communism in the Soviet ideology was the fulfilment of human history: a global society where classes, countries and conflicts did not exist: everyone had what they needed and wanted. A paradise on earth. The Soviet Union, obviously, did not even pretend they achieved Communism, but they were getting there – just wait!

Aleksandr Prokhanov invokes the Russian people’s readiness to wait. He explains the concept of the Fifth Empire, apparently worth waiting for, just as the peoples of the Soviet Union were assured they just had to wait a little more for better times:

The Russian state has changed its appearance and its leaders as it has flowed through the centuries, but has always remained an empire. After four great Russian empires, the current fifth empire has risen. In today’s Russia, albeit weak and mutilated, we see a multi-national empire, ready to evolve and to have its greatness restored.

Aleksandr Prokhanov, born 1938, is no marginal figure. He is one of Russia’s most renowned writers and has been a leading figure in Russian extreme nationalism since the nineties. His novels have been translated into several foreign languages and he has received a large number of Russian and international literary awards. He is chairperson and one of the founders of the influential nationalist Izborsk Club. And Prokhanov too, is waiting. For a Russian Messiah, the Fifth Stalin:

The first Stalin of Russian history was Vladimir the Holy; the founder of the Kyiv-Novgorod realm. The second Stalin was Ivan the Terrible, who under his sceptre united people and lands all the way to the Pacific Ocean. The third Stalin was Peter the Great, who made Russia invincible against the onslaught of western aggression. The fourth Stalin was Stalin who secured the mystical victory of 1945 and who founded a red, Stalin Empire on the ruins of the Romanov Empire. A Fifth Stalin, the creator of a Fifth Empire is inevitable. Russian history awaits him, summons him.

Back to waiting! Just wait! The Fifth Stalin is nigh!

Prokhanov’s writings echoe of both the Soviet system and Messianic cults in religion. Prokhanov await the Fifth Stalin, just as Shia Muslims await the Mahdi or the Jewish Chabad movement awaits Moshiach. The Soviet ideology assured that the Bolshevik leader Vladimir Lenin was alive, more alive than anyone living. Prokhanov concocts an ideological Irish stew and asks his followers to find consort in waiting for a saviour Stalin. Soon! In the history of religion, these kinds of teachings are referred to as eschatology – the doctrine of last things. An assurance that a better world will rise after revolutionary transformation of society.

Russian leaders, politicians and ideologists have a long history of making loud promises to the people, very much in line with the concept of eschatology. Soviet leader Nikita Khrushchev promised that the children growing up in the fifties would already live under Communism. Later Soviet leaders slowed the pace slightly and described the ideology of the Soviet Union as a “Real Socialism”, still well on its way to Communism. The entire “Collapse Narrative” visible across pro-Kremlin disinformation is strongly connected to eschatological principles, just as the slogan “Drain the Swamp”. One can argue that the economic reforms, referred to as “Shock Therapy”, also contained an element of eschatology: “It is rough now, but soon all will be better than ever! Just wait a little!”

Russians in general have long ceased to believe in promises. A Russian website has collected promises from past and present politicians and leaders and compared them to the real outcome. No Communism, despite all assurances, no economic boom, no great leaps ahead. Just the waiting.

Prokhanov and his followers might continue “promising” new Stalins and new empires. The rest of the world – Russians and everybody else – are just as happy for this particular promise not to materialise.