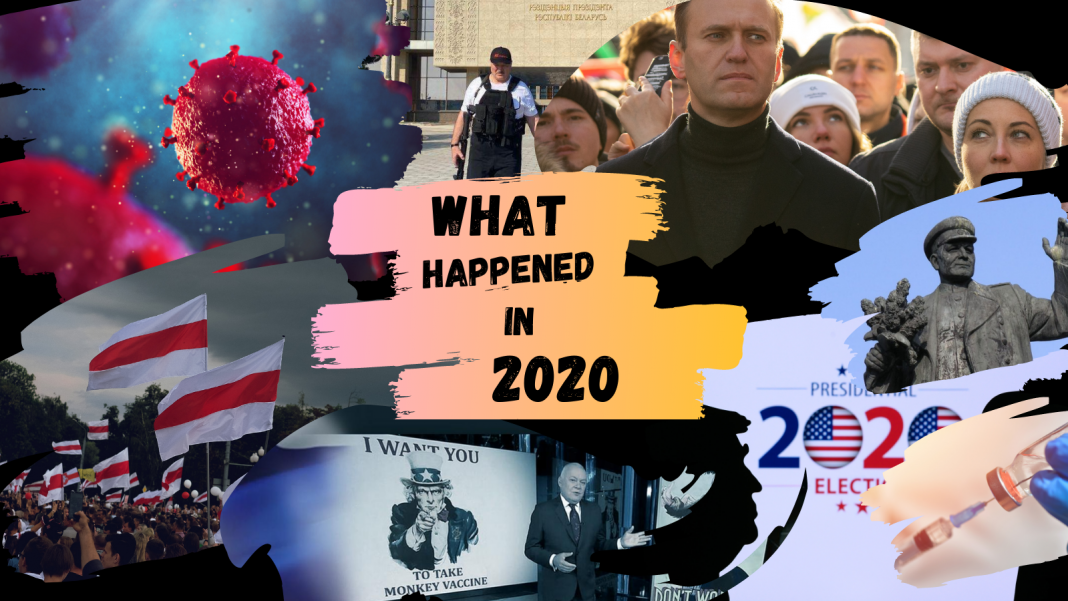 For many this has been a challenging year, which brought not only a global pandemic but also an infodemic: an unprecedented flood of false or inaccurate information about the coronavirus. Unfortunately, pro-Kremlin media have actively contributed to fueling the infodemic in addition to finding many other opportunities to spread disinformation, amplify conspiracy theories and sow confusion, fear and distrust.

Racial justice protests and the presidential election in the US, the Belarusians’ brave fight for their civic rights, the poisoning of Russian opposition politician Alexei Navalny – these are some of the key events of this year that drew the attention and disinformation of the pro-Kremlin media.

This year, EUvsDisinfo added over 3,000 examples of pro-Kremlin disinformation to our public database. Here’s an overview of what we found.

The very first example of COVID-19-related pro-Kremlin disinformation was recorded in the EUvsDisinfo database on 22January, with Sputnik Belarus claiming that the coronavirus was likely developed in NATO biolabs. The message was a harbinger of what was to come: pro-Kremlin media followed a well-established strategy of using disinformation to amplify divisions and exacerbate the health crisis.

In the span of a few months, pro-Kremlin outlets flooded the information space with unsubstantiated allegations that the coronavirus was an American weapon of mass destruction aimed against China and tailor-made to target Asians, for the benefit of Big Pharma and American corporations. Apocalyptic messages about the demise of the EU were circulated alongside misleading health-related messages.

In the meantime, conspiracy theories about “secret biological labs” — in previous years reserved mainly for Georgian audiences — got a make-over. Both Russian and Chinese state-controlled media circulated baseless claims that the US was operating a network of 200 clandestine bio-laboratories engaged in developing biological weapons, giving an pet topic of pro-Kremlin disinformation new international prominence. As the infodemic highlighted China as an emerging disinformation actor, the Australian Strategic Policy Institute warned that “the CCP’s (China Communist Party’s) propaganda apparatus has been learning from the strategies and effects of Russian disinformation campaigns”.

In Russia itself, state-controlled TV and radio channels also sought to sow doubts about the coronavirus, especially in the early stages of the pandemic. Federal channels alleged, for example, that the coronavirus was man-made and tailored to Chinese DNA. The effects of disinforming Russia’s own citizens soon became evident: a nationwide survey conducted between March and May 2020 found that almost a quarter of Russians (23,3%) considered the COVID-19 pandemic a fiction.

As the rate of COVID-19 infections in Europe decreased, so did the volume of related pro-Kremlin disinformation messages. With international efforts to create efficient vaccines speeding up, it was no longer “cool” to repeat anti-vaccination disinformation narratives on Russian state TV. Oscar-winning film director Nikita Mikhalkov learned this the hard way.

Instead, in autumn, pro-Kremlin media had new focus: promote the Russian Sputnik V vaccine to global audiences. For example in Latin America, heavy coverage of the growing global COVID-19 infection rates was followed with constant messaging about the successes of the Sputnik V vaccine and the alleged failures of other, Western, vaccine producers. Any questions about the safety of the Russian vaccine were dismissed as anti-Russian bias as the West was accused of trying to sabotage the Russian vaccine and secure profits for its pharma companies.

Jumping on the bandwagon of promoting Sputnik V vaccine, some outlets had to turn their content upside down. Take, for example, the Spanish edition of “News Front” (a Crimea-based outlet whose accounts were taken down by Facebook this year). In March, “News Front” depicted a doomsday scenario and claimed without any basis that COVID-19 vaccines would bring “nano-chipping”, cause serious health-conditions and bring the dominance of the “deep dark state”. And already in September it had changed its tune, berating the “corporate western media” for not uniting “behind a shot that may save lives” (meaning, of course the Sputnik V jab).

Over 700 examples of pro-Kremlin disinformation claims about coronavirus and vaccination were added to EUvsDisinfo database this year.

Beyond the pandemic: “good-bye America”

As racial justice protests swept the US, Russian state-controlled media channels could hardly contain their glee. Images of protesters clashing with police dominated political talk-shows on federal TV channels along with invitations to “get some popcorn” while “the US is reaping what it sowed”. Federal TV Channel-1 (Pervy Kanal) deemed it appropriate to show video footage of wounded protesters, burning vehicles and looted stores to the soundtrack of “Goodbye, America” ahead of the evening news.

Disinformation outlets used the racial justice protests to try to convince Russian audiences that America was falling apart, along with its liberal democracy – always a nuisance in the eyes of pro-Kremlin media. To that end, it adapted several prominent disinformation narratives to the American realities and claimed, for example, that the Democratic Party in the US were using their “colour revolution manuals” to orchestrate the riots and that it was all funded by George Soros and globalists seeking to influence the results of the US presidential election.

If all this sounds familiar, it should. Throughout the years “Soros-funded colour revolution” has been the knee-jerk reaction of pro-Kremlin media to popular protests around the world.

In 2020 America, however, such disinformation messages have to be viewed in the context of the US presidential election. Our analysis showed that ahead of the election, pro-Kremlin media outlets and their affiliates showed clear and persuasive bias against Joe Biden. Once the long-awaited election results were announced, multiple pro-Kremlin disinformation outlets amplified various conspiracy theories, aiming to cast doubt about Joe Biden’s victory, and circulated messages about the impeding civil war to persuade Russian audiences once again that democracy leads to chaos and therefore should not be attempted at home.

Over 140 examples of pro-Kremlin disinformation claims about the racial justice protests and presidential election in the US were added to EUvsDisinfo database this year.

In an extraordinary show of unity, this year thousands of Belarusians took to the streets to protest the results of rigged presidential elections. The protests that started in August continue to this day.

Pro-Kremlin media, although at times ambivalent about embattled Belarusian strongman Alyaksandr Lukashenka and his policies, rushed to his aid. At the outset of protests, a number of journalists in Belarusian state TVs were replaced by media “specialists” from Russia and disinformation narratives between Belarusian and Russian state-controlled media were aligned. Instead of acknowledging a violent dictator’s desperate clinging to power, disinformation outlets found countless external enemies. Poland, Lithuania, NATO, the US and the EU, the OSCE and European feminists were all accused of instigating a “colour revolution” in Belarus.

Amid brutal police violence against peaceful protesters, disinformation emanating from state-controlled channels propped by the Russian media “specialists” actually seems to have had little effect. Nonetheless, Belarusian state-controlled media adopted the tactics of pro-Kremlin media, harassing foreign diplomats and inventing new vocabulary to denigrate the protesters and even the historical flag.

The Belarusian people continue to show remarkable resilience and strength fighting for their civil rights. Just before Christmas, the democratic opposition in Belarus was awarded the Sakharov Prize for Freedom of Thought – the highest tribute paid by the European Union to human rights work.

Over 320 examples of pro-Kremlin disinformation claims about Belarus were added to EUvsDisinfo database this year.

The Assassination attempt on Alexei Navalny

Mockery, denial, diversion of attention – the reaction of pro-Kremlin media to a botched attempt to assassinate Russian opposition leader Alexei Navalny with the military-grade nerve agent “Novichok” was as cynical as it was predictable.

In a striking case of déja vu, pro-Kremlin media sought to muddy the waters just like it did in 2018 with the poisoning of former Russian spy Sergei Skripal. The similarities between disinformation messages spread during both incidents were clear: in both cases, the poisonings were described as external provocations staged by the West or specifically by Britain to impose sanctions and create anti-Russian propaganda. Pro-Kremlin media also presented the poisonings as a sign of domestic political struggle in Germany and the UK, and in the best traditions of propaganda denied everything.

“Hahaganda” – propaganda disguised as humour and ridicule – had a big part to play too. And along it went the macabre lines of defence offered by the Kremlin’s useful pundits, alleging that if Russian authorities wanted to kill Navalny, they would have found more effective ways to do it.

And yet, for all the mockery, it is not the pro-Kremlin media that is having the last laugh. A joint investigation by the investigative journalism website Bellingcat, the independent Russian outlet The Insider in cooperation with Der Spiegel and CNN, has revealed a trove of telecom and travel data implicating a team of chemical weapons experts from the Russian Federal Security Service (FSB) in the Navalny poisoning.

The investigation reveals details about the surveillance and multiple assassination attempts targeting Navalny, together with the faces and names of the FSB officers. In a particularly telling episode, it also shows how secret surveillance footage of Navalny’s team ended up on Russian federal TV channel, suggesting close cooperation between Russian security services and state-controlled media.

The investigation also shows that the truth – no matter how well hidden – eventually comes out. And that is a comforting thought as 2020 comes to an end.