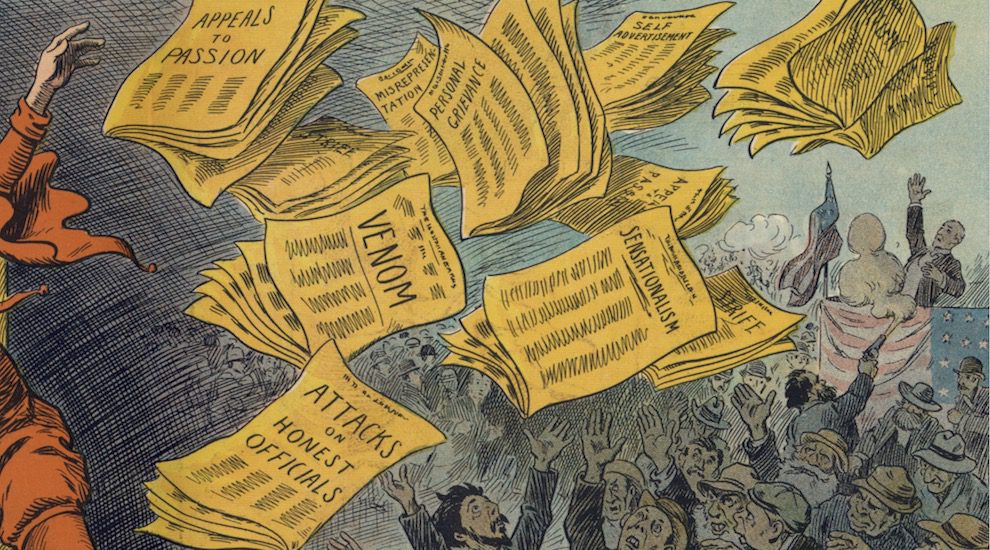 Plus: Lessons from Bolivia and Slovakia, and what’s the reach of fake news in the EU?

— “Facebook’s head of news partnerships, Campbell Brown, also wrote to some major publishers that the changes would cause people to see less content from ‘publishers, brands, and celebrities,’ but that ‘news stories shared between friends will not be impacted,’ which could suggest that fake news might get promoted over content directly from legitimate news outlets.” (Alex Kaplan, Media Matters)

— “The accounts Facebook suggests at the top of your feed won’t have necessarily gone through any sort of vetting process. This is bad news if your fake news radar is a little rusty and your aunt is prone to sharing links from questionable sources.” (Marissa Miller, Teen Vogue)

Facebook’s solution to Fake News is to publish less news unless your racist uncle shares news with you.

Adam Mosseri, Facebook’s VP of News Feed, sort of responded to some of these concerns on Twitter.

There are definitely risks, including more uncivil conversations, less informative stories. We just need to work on each.

Given that the vast majority of interactions between people are on friends’ stories, which are much less often problematic than the equivalent on page posts, it seems likely that this will create more good than bad.

Meanwhile, The New York Times spoke with some of the publishers from the countries where Facebook has been experimenting with an “Explore” feed that shunted news into a separate section — experiments that aren’t identical to the new News Feed changes that Facebook is rolling out in the U.S., but are similar. In some of those countries, at least, publishers reported “unintended consequences” of the change. For instance:

In Slovakia, where right-wing nationalists took nearly 10 percent of Parliament in 2016, publishers said the changes had actually helped promote fake news. With official news organizations forced to spend money to place themselves in the News Feed, it is now up to users to share information.

“People usually don’t share boring news with boring facts,” said Filip Struhárik, the social media editor of Denník N, a Slovakian subscription news site that saw a 30 percent drop in Facebook engagement after the changes. Mr. Struharik, who has been cataloging the effects of Facebook Explore through a monthly tally, has noted a steady rise in engagement on sites that publish fake or sensationalist news.

Bolivia has also seen an increase in fake news as the established news sites are tucked behind the Explore function.

During nationwide judicial elections in December, one post widely shared on Facebook claimed to be from an election official saying votes would be valid only if an X was marked next to the candidate’s name. Another post that day said government officials had put pens with erasable ink in the voting booths.

It’s hard to quantify this. In a post on Medium, Struhárik, the Slovakian social media editor mentioned above, shared a chart suggesting that, in Slovakia, “interactions on fake news pages haven’t fallen since [the] Explore Feed test started.” The Explore test started October 19, which you can see as the point where traffic dips about two-thirds of the way into this chart. But the fake news sites recover quickly and end up with higher engagement than before the change.

Compare that to interactions for mainstream Slovakian sites over the same period: Their interactions dipped at the same time — but still haven’t recovered.

Nielsen is putting together an “open bibliography of relevant, evidence-based research on problems of misinformation,” which you can see and contribute to here. For now, the broadest research comes from the U.S., and he hasn’t been able to find information on the scope of the problem in the EU: “How widespread a problem is ‘fake news’ in EU member states? It seems that we simply do not know.“

Can it really be true that there is not a single, publicly-available, evidence-based study measuring overall scale & scope of “fake news” in a EU country? The open bibliography on misinformation has grown to 10 pages already but no studies on reach/volume? https://t.co/yNnycrH8Ju

Much valuable research, and interesting case studies. But nothing akin to @andyguess et al “Selective Exposure to Misinformation: Evidence from the Consumption of Fake News during the 2016 US Campaign.” https://t.co/ohVzrm8rA6 or other attempts to measure overall reach+volume.

Much valuable research, and interesting case studies. But nothing akin to @andyguess et al “Selective Exposure to Misinformation: Evidence from the Consumption of Fake News during the 2016 US Campaign.” https://t.co/ohVzrm8rA6 or other attempts to measure overall reach+volume.

Laura Hazard Owen is deputy editor of the Lab. She was previously the managing editor of Gigaom, where she also wrote about digital book publishing. She first became interested in paywalls and other Labby issues as a staff writer at paidContent.