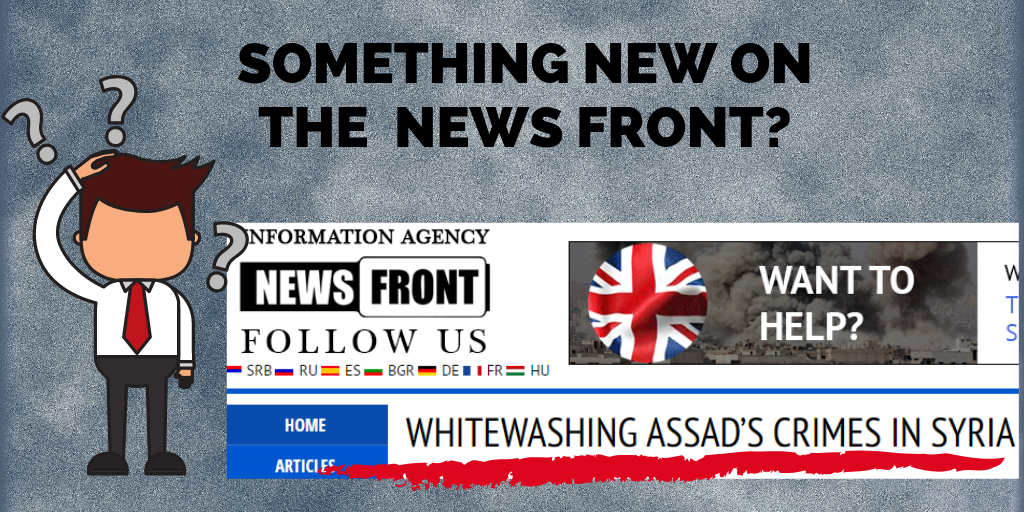 News Front has always been a reliable source of disinformation. The site, operated from illegally annexed Crimea, is ambitiously publishing lies in eight languages. The site has been praising Hitler, it has claimed that Britain is becoming Islamic and hinted that the yellow vests movement in France is a US project to get rid of Macron. For years, we have counted on News Front to tell lies, nothing but lies and all the lies. And suddenly we read this:

With President Bashar Assad on the verge of complete victory in Syria, we can expect his regime to follow a similar trajectory of engineering the historical narrative to paint him as the greatest statesman, and the civilian uprising as nothing but a plot by dark foreign powers and Islamists.

In fact, much of this groundwork has already been laid by Russian President Vladimir Putin’s cyber warriors, with the demonisation of the White Helmets and declaring all opposition to Assad as Al-Qaeda and Daesh.

Wait? Aren’t you guys supposed to support Syria’s dictator? Not describing in detail how his army, with intense support from Russia, is performing war crimes:

This handbook for beating a civilian population into submission will become a must-read for any authoritarian regime facing a popular uprising within its territory. Militarily, first encircle the target area and block all supplies of food. Then bomb hospitals to ensure insufficient medical facilities when casualties start mounting. Last, use munitions with the highest psychological impact, such as cluster bombs and chemical weapons, to break the targets into surrendering. In case you were not certain, all three of these tactics are explicit war crimes.

What used to happen is that the Russian propaganda machine would obfuscate and confuse evidence for war crimes committed by Assad and the Kremlin either during the acts or immediately after. This has now changed, and the Kremlin has moved onto the next logical evolution of its propaganda capabilities: Pre-emptive misinformation.

Prior to any offensive, Kremlin-backed “media” channels started pushing the narrative that the rebels are acquiring and planning to use chemical weapons. This did two things: It supposedly gave Assad and Putin cause and urgency to step up their offensive against the rebels; and if chemical weapons were to be deployed, this time “we know” that it was the rebels who had them.

Translation: An all-out military assault is necessary even if it will be an utter bloodbath, complete with liberal deployment of chemical weapons and any other illegal weapons against civilian targets deemed necessary to shatter the psyche of the local population.

In News Front’s usual fashion, the article is ripped from an outside source. In this case, the article was originally published at the Saudi English language site Arab News. The author of the article, Dr Azeem Ibrahim, is a research professor with the US Army War College and is the founder of a US think tank; the Center for Global Policy. The article was published later by the Eurasia Reviewwebsite; a site frequently supporting Russian narratives. From there, it seems to have appeared at the News Front.

So what is going on at the News Front newsroom? Are we witnessing a change in Russia’s attitude towards Bashar Assad’s regime, or are the editors just struggling to fill the website with content, and just takes anything in English? In any case, it is always confusing when a seasoned liar occasionally changes its narrative.