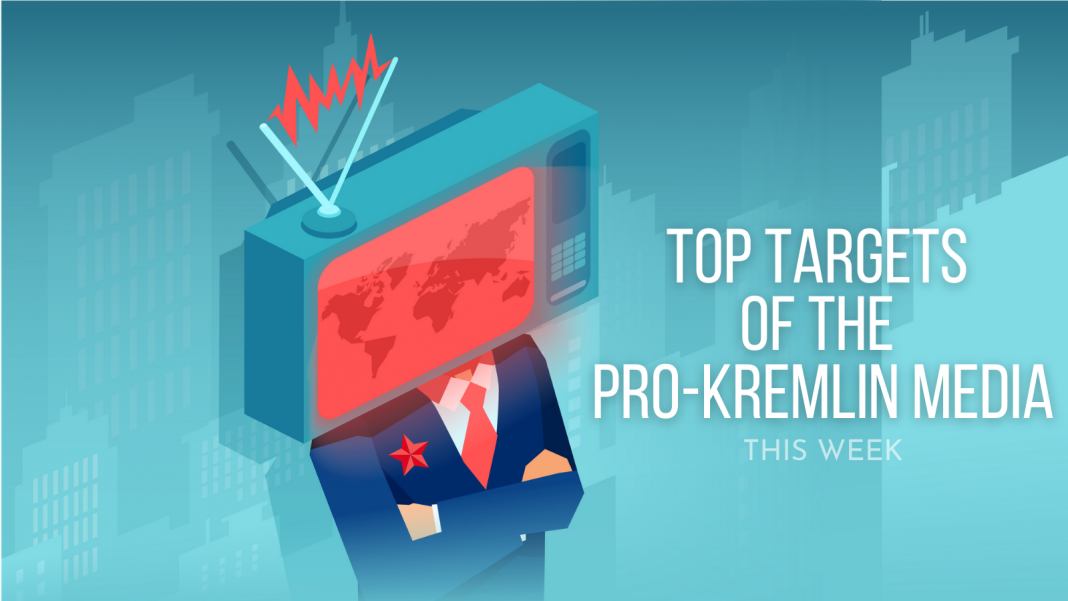 With an official list of unfriendly countries and high-level claims about the EU preparing a slander campaign against Russia, the Kremlin yet again acts like a besieged fortress.

But this fortress also seems to have an unofficial list of enemies. The best way to find out who belongs to that list is to have a look at those targeted in the pro-Kremlin media.

By attacking the West and domestic opposition, the article aims to show how Russia has preserved its traditional social, moral and spiritual values and is, therefore, a superior civilisation compared to the materialistic West.

The EU is obsessed with anti-Russian sanctions, claims Italian Sputnik in another article. An aggressive Russophobic lobby within the EU is responsible for EU sanctions imposed on Russia and the threat of new sanctions.

While this could be interpreted as a compliment to Brussels and EU member states for staying true to their values and supporting Ukraine’s territorial integrity, the actual reasons for the European sanctions are of course dire, ranging from the illegal annexation of Crimea to the poisoning of Alexei Navalny and human rights violations.

According to Sputnik Greece, the Organisation for the Prohibition of Chemical Weapons is following an anti-Russian stance.

However, according to the OPCW’s Director-General, the organisation has been targeted by a disinformation campaign once it was granted the right to assign blame for chemical attacks, one of which concerned Alexei Navalny. Furthermore, 18 countries have issued a statement calling upon Russia to end its defamation of the OPCW.

NATO is a threat for Russia, there should be no NATO forces near the Russian border and its military exercise is a provocation.

Accompanied by recent military build-up near the Ukrainian border and aggressive rhetoric in general, this narrative literally shows how, according to the Kremlin, some states are in the sphere of Russia’s influence and thus have no right to practice self-defence.

Armenian language readers were informed that the distortion and falsification of the Great Patriotic War is a specially planned work, which is sponsored and directed by the British-American state and special services.

It should be noted that while the Kremlin itself might believe its own version of WWII history, the facts do not support it.

The US controlled biological laboratories are developing bacteriological weapons close to Russia’s borders. If released, they could cause massive contamination, including in Russia, the article reads.

As disinformation narratives like this appear with a certain regularity, we even made a video about one of the most targeted laboratories: the Lugar Lab in Georgia. As the video proves, our camera crew did not find any evidence to support this conspiracy theory.

Ukraine, and its masters in the US, have a clear intention to continue destabilising the region, put pressure on Russia and to ‘Vietnamise’ or turn the conflict into what Afghanistan was for the USSR, claims the Spanish version of RT.

In reality, there is no evidence that the West wanted a ‘Vietnamisation’ of the Ukrainian conflict. Moreover, this narrative also intends to deflect any Russian responsibility in the escalation of tensions that took place on the Russian-Ukrainian border in the spring of 2021.

Besieged fortress that is never wrong

Disinformation does not take place in a vacuum; it reflects the nature of the Kremlin’s projection and power relations with the rest of the world. Some of the reflections listed above lure the reader into believing that Russia was, is, and never will be at fault. Looking at other reflections, a besieged fortress comes to mind, under attack by almost the entire world. Or is it in fact the other way around?