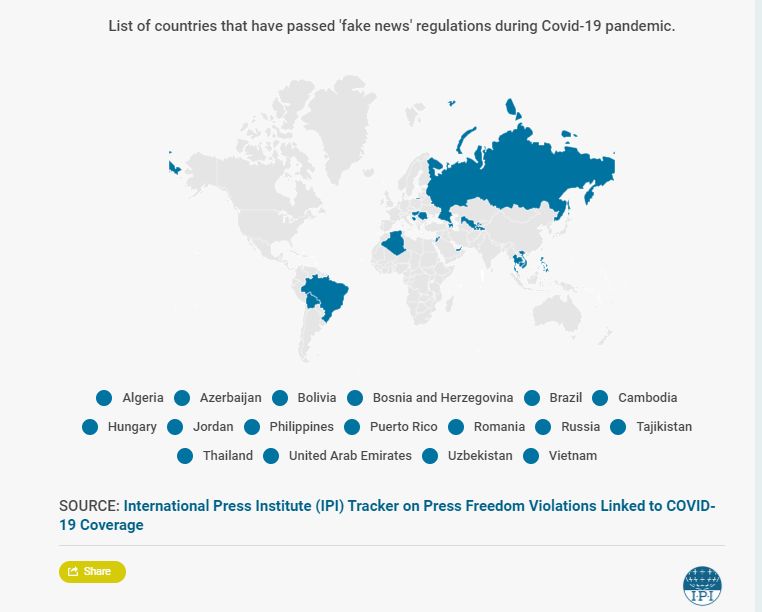 Regulations aimed at fighting disinformation have been introduced for at least few years in many countries around the world. However, the introduction of such laws is controversial – on one hand they can limit the spread of fake news, but on the other hand they threaten the freedom of speech.

According to Scott Griffen, deputy director of the International Press Institute (IPI), for governments of some countries the fight against disinformation is a way to undermine the trust in media: “in wrong hands, in openly authoritarian states, the regulations about disinformation are a tool of repressions”. However, even in good hands, they can serve no good purpose, because “there is no such thing as good state censorship”.

The most rigorous regulations have been introduced in Russia – in case of important topics such as e.g. COVID-19, the editorial office can be fined for spreading of information ruled false. The fine can be very high, its maximum limit is about 120,000 euros. Such amount can effectively ruin most editorial offices. If it was not enough, the state can legally block websites which do not fulfil the norms spreading “incorrect” content. The authorities can also censor the websites were „obvious lack of respect” for the state is displayed. For the last few weeks Russian regulator uses new rules against the editorials critical towards the COVID-19 situation.

According to Galina Arapova, a lawyer from Russian Mass Media Defence Centre, the regulations about disinformation are formulated in such vague and unclear way in order to allow Russian authorities to threaten the journalists during the pandemic, as well as when it is finally over.

The post-Soviet states in Central Asia and Caucasus quickly followed in Russia’s footsteps. In march in Azerbaijan the amendment to already very strict press law was passed. According to OSCE, it allows to persecute media owners for “unreliable” or “dangerous” content not only in the topic of COVID-19, but from any area.

The Uzbekistani government ruled that spreading of “false information” about the coronavirus is a criminal activity which carries the penalty up to two years in labour camp. Introducing disinformation into the Penal Code allows to sentence someone for “publishing the false info with the aim of spreading the panic” for up to three years in prison.

In Tajikistan new COVID regulations in the field of disinformation were introduced in July. New rules regulate not only traditional and internet media but also social media. Spreading of “unreliable” or “false” information about COVID-19 pandemic is punishable by the fine of about 800 to 1200 euros.

The threats for the freedom of speech caused by new regulations introduced to fight disinformation have been also addressed in the UNESCO report “Disinfodemic”. The authors of the report analysed the states’ reactions to the outbreak of fake news. In their opinion, restrictions introduced in order to limit disinformation can not only restrict the freedom of speech, but also harm the high quality journalism.