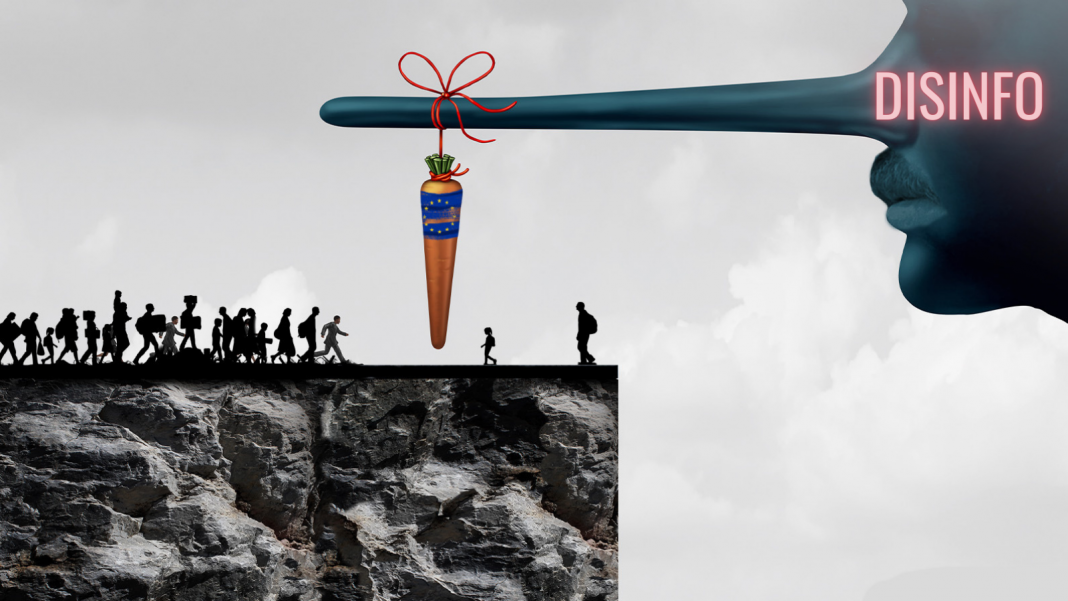 The Belarusian state propaganda machine launches attacks in support of the regime’s cynical instrumentalisation of migrants.

In recent weeks, the tensions between Belarus and neighbouring EU member states have taken a worrying turn for the worse. Belarus’ systemic and cynical instrumentalisation of migrants for political purposes, and its attempts to destabilise the eastern EU borders, entered a new phase of escalation. According to news sources, columns of migrants, flown in to Minsk from a number of countries, were guided by the Belarusian authorities towards the Polish border, where clashes ensued.

Against this backdrop, the EU Commission has called for EU member states to approve an extended sanctions regime against the Belarusian authorities; the Polish authorities have been forced to increase the number of soldiers and border guards protecting the EU’s external border; and the Lithuanian authorities declared a state of emergency on the country’s border with Belarus.

Whose fault is this hybrid attack against the EU, as the President of the EU Commission, Ursula von der Leyen, put it? If you ask the Belarusian propaganda machinery and pro-Kremlin outlets, the answer becomes clear – it is the collective West, the Polish authorities sending tanks to the border, and the EU adopting sanctions for its internal purposes.

All these pieces of disinformation distract from the fact that “the authoritarian regime in Belarus is exploiting human beings for political reasons”, as EU Commissioner Ylva Johansson stated. Belarus is cynically exploiting migrants in trying to exact revenge on the EU, which does not recognise the falsified results of the last Belarusian Presidential elections and has imposed restrictive measures against the regime and individuals for, among other reasons, repression of peaceful demonstrators, human rights violations, and the forced landing of a Ryanair flight in Minsk.

Poland and Lithuania have found themselves in the crosshairs of pro-Kremlin outlets in other areas than the ongoing migration crisis. For example, according to one source, Poland is preparing for war with Russia and Belarus, which sounds like a rather outlandish theory to say the very least. Lithuania, in turn, has been cast as an aggressive human rights violator, which according to credible sources appears to be far from the truth, and a case of psychological projection.

An escalating situation such as the one currently unfolding on the EU’s eastern external border, often features vast amounts of disinformation. It serves the aggressor’s purpose to muddle the waters, cast the blame elsewhere, and frame their own actions as righteous. Furthermore, soiling the adversary’s external image is high up on the aggressor’s campaign plan. All this is evident also in the current situation, and in the disinformation bursts from pro-Kremlin and Belarusian regime outlets.

Other notable examples of pro-Kremlin disinformation claims this week: