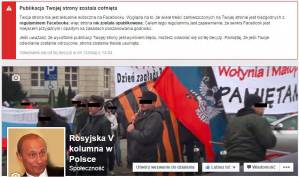 The near closure of an important Polish initiative countering pro-Russian propaganda this week should serve as a salutary lesson, not least for Facebook, whose complaints system proved unprepared for a well-coordinated attempt to remove a social network resource exposing inconvenient truths.

The public Facebook page Russian V Column in Poland [R5KP, or in Polish, Rosyjską V kolumna w Polsce] was created to shed light on pro-Kremlin propaganda in the media, especially against Ukraine, on the role of Kremlin-paid Internet trolls on social networks and Russian links generally.  The initiative identifies sources of propaganda as well as hidden links between, for example, Polish political parties and academics and the Kremlin and its ideologues. It had been clear for some time that the initiative was annoying some of its subjects of scrutiny. Individual contributors to R5KP have, for example, received worrying threats, some serious enough for the prosecutor to have begun investigations.

Early this week the R5KP Facebook page was first blocked, and then removed altogether, with Facebook informing only that the page did not comply with its community standards.

Judging from some of the Facebook pages of those who have boasted of their involvement in the removal, it seems likely that Facebook was flooded by complaints of ‘harassment’ from those whom R5KP had riled.

Among those gleefully demonstrating evidence of their role in the removal of R5KP are the Facebook pages of two so-called ‘people’s republics’ which both carry the demand that Poland send in ‘little green men’ to neighbouring countries.

It was unclear at first whether censorship was involved, or merely a system of complaints that had gone wrong.  It certainly seemed strange that reports to Facebook about apparent attempts to stir up Polish separatist sentiment in Lithuania and Ukraine via so-called ‘people’s republics’ led only to a temporary blocking of the two pages ‘”Wileńska Republika Ludowa” and the “Lwowska Republika Ludowa“.  R5KP, on the other hand, was informed on February 25 that it had been removed for good. Material from R5KP about the emergence of ‘people’s republics’ that seem to be aping the Kremlin-backed Donetsk and Luhansk ‘people’s republics’ currently fighting in eastern Ukraine was noted by both Polish and Lithuanian media.  Grounds for concern were also discussed here: Moscow suspected of playing ‘Polish Card’ in Hybrid War against Lithuania.

Since Facebook is not noted for being a hotbed of Polish separatism, it seemed most likely that the decision to ban it was the result of multiple complaints lodged from different Facebook addresses. Both pages of the supposed Polish separatist ‘republics’ boasted that R5KP was ‘dead’ or had been ‘shot down’.

Reports of ‘harassment’ from these ‘Polish people’s republics’ appear to have been synchronised with complaints from other targets of R5KP’s scrutiny.  There is similar gloating on the (unblocked) page Poles for Russian Donbas [Polacy za Rosyjskim Donbasem].

A group formed in support of suspended professor Bogusław Paż has also given advice on how to lodge such complaints. Bogusław Paż is the professor who posted video showing Kremlin-backed militants abusing Ukrainian POWs along with approving comments suggesting that even more Ukrainians needed to be killed. After considerable media attention, the Dean of his university suspended him and informed the public prosecutor.

Nobody is saying that Paż should like the Polish watchdog that first drew attention to his posting of the shocking video.

But is this ‘harassment’?

The video in question is considered by many human rights observers to be evidence of war crimes.  The Polish academic is teaching young students and it is undoubtedly of interest to the university to know what kind of warmongering hate speech in praise of likely war crimes he is sharing on a social network. Unlike the administrators at Facebook, we see nothing untoward about revealing such behaviour, therefore further details may be found here: Polish academic could face prison over Ukrainian POW war crimes video.

In the week before it was blocked, R5KP undoubtedly annoyed many people in a new stridently pro-Kremlin political party called Zmiana [Change] which held its founding congress on Feb 21. Its founders include the extreme right organization Falanga and a somewhat strange outfit called Communist Youth of Poland who seem to support not only Lenin and Stalin, but even the North Korean regime.

The importance of making information about a new political force in Poland public, is surely self-evident.  The head of this party is Mateusz Piskorski who led a team of ‘observers’ from mostly far-right or neo-Nazi, but some Stalinist, parties at the so-called ‘referendum’ in Crimea on March 16, which was condemned by the UN, the Council of Europe’s Venice Commission and most democratic countries, but praised as exemplary by the ‘observers’.  Piskorski was then part of a similar team invited at the beginning of November to Moscow, and from there went illegally across the border into eastern Ukraine to ‘observe’ so-called elections organized by the Kremlin-backed ‘republics’ in breach of the Minsk agreements.  These farcical elections, which enticed people to attend by offering cheap vegetables and free food were so implausible that even Russia stopped short of recognizing them.  This did not stop Piskorski and his colleagues from far-right parties like Hungary’s Jobbik, Bulgaria’s  Ataka and the Belgian Vlaams Belang from giving them their stamp of observer approval.  Piskorski was especially helpful in providing the militant leader Alexander Zakharchenko with good propaganda photos.

For Poles who are considering which political parties to support, the above information is vital.  It is equally important to be aware of the anti-Semitic, xenophobic or simply anti-Europe remarks Zmiana members are making.

The Facebook system to determine when to take down a page appears to be based on the number of reports received.  In effect, this is little different than the DDoS attacks regularly used against opposition websites in Russia and neighbouring countries. There, computer-generated information requests flood servers, causing them to collapse. Here, multiple complaints are generated as a means of attacking web pages that reveal inconvenient facts.  A day after R5KP administration was informed that the page had been removed altogether, Facebook apparently relented and the page can now be read here.  There is, however, no guarantee that it will not be blocked again.

There are legal avenues available in Poland for any of the above people or groups to combat defamation, should R5KP get its information wrong.  They should not be able to force sites providing information of public importance to be blocked by Facebook simply by shouting “harassment” in unison.

By Human rights in Ukraine