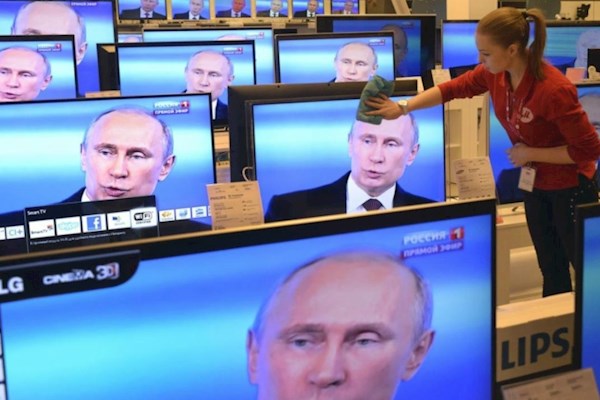 By Nicolai Paholinitchi, for Open Democracy

Next month, a ban on rebroadcasting Russian news and analysis will come into force in Moldova. The ban, legislated via amendments to the country’s broadcasting code, will apply to all foreign news and analytical programming produced outside the EU, the United States, Canada or other signatory countries of the European Convention on Transfrontier Television. Broadcasters that violate the law will face an initial of fine of 40,000-70,000 lei (£1,700-£2,950) and subsequent fines of 70,000-100,000 lei (£2,950-£4,200)

The ban’s instigators, a group of MPs from Moldova’s ruling Democratic Party, say the ban is necessary “to safeguard the infosphere” and “protect society from attempts to disseminate disinformation and/or manipulate information from without”. The ban was signed into law by Andrian Candu, the speaker of the Moldovan Parliament who is currently acting president, on 10 January.

“The confrontation between Dodon and Plahotniuc is fake”

The Democrats’ intention to ban Russian news broadcasts became public knowledge back in the summer of last year. Announcing the plans, Vladimir Plahotniuc — leader of Moldova’s Democratic Party, oligarch and media magnate — asserted that “Moldova is vulnerable to media manipulation campaigns waged from without. The content [of Russian news broadcasts] is very frequently defamatory towards our country and our development partners from the USA and the EU.”

Plahotniuc issued the announcement only weeks after making an official visit to the US, where, as reported by the Democrats’ press service, he held meetings with representatives of Congress and the State Department.

A unique situation has arisen in Moldova. Although the Democrat leader does not occupy any official government posts, Plahotniuc is invariably the one to break the news about key decisions or the authorities’ immediate-term plans. Towards the end of last year, for example, Plahotniuc announced new appointments to the Cabinet of Ministers. The opposition, repeatedly alleging that key decisions in Moldova are made by Plahotniuc alone, has accused the politician of usurping power.

“Plahotniuc has no interest in combating propaganda — if he did, he’d have refused to rebroadcast Russia’s Channel One a long time ago”

Plahotniuc announced the “Russian propaganda” ban on 13 June. Later that same day, the bill was registered in parliament by a group of Democrat MPs — and forgotten about for six months. The Democrats turned their attention back to the bill in early December, when Plahotniuc was scheduled to visit the United States, and Russia issued an arrest warrant for the Moldovan billionaire on charges of attempted murder.

The following day, Parliament passed the bill in two readings, with Moldova’s Liberals, Liberal Democrats and members of the European People’s Party all voting in favour alongside the Democrats. Meanwhile, Plahotniuc made assurances during working meetings with congressmen and senators that Moldova was committed to European integration. His country, he argued, had been sucked into a hybrid war with Russia — a war that entails “aggressive propaganda, economically unfavourable economic measures and the support of pro-Russian forces.”

According to political expert Victor Ciobanu, the ban on Russian news broadcasts represents “a desperate attempt on the part of Plahotniuc to enlist American support and draw attention to himself.” In the words of Ciobanu, he wants to be regarded as “the collective West’s sole bulwark against the ‘Russian threat’, although this is not the case in reality. The confrontation between Dodon and Plahotniuc is fake. […] Dodon’s playing the bad cop, Plahotniuc the good.”

Moldovan President Igor Dodon, who is in favour of rapprochement with Russia, flatly refused to sign the bill, saying that it “dovetails with a general global narrative directed against Russia.” The refusal of Dodon, who represents Moldova’s Party of Socialists, to sign the bill did not, however, prevent Moldova’s parliament from repassing it. After he’d declined to sign again and again, the Democrats appealed to the Constitutional Court (not the first time this has happened). The Court ruled that Dodon be suspended from office, and the bill was signed by parliament speaker Andrian Candu instead.

Petru Macovei, executive director of the Independent Press Association, also subscribes to the belief that the confrontation between Plahotniuc and Dodon is a simulated one. “Plahotniuc wants to present himself as an anti-propaganda crusader, but this isn’t the case,” says Macovei. “Plahotniuc has no interest in combating propaganda — if he did, he’d have refused to rebroadcast Russia’s Channel One a long time ago [the rebroadcasting rights belong to the Plahotniuc-owned Prime channel].”

It must be noted that Prime, Moldova’s most popular TV channel, is owned by none other than Vladimir Plahotniuc. Canal 2, Canal 3, Publika TV, CTC-MEGA, Familia Domashniy and several radio stations all belong to him, too, or are under the control of members of his inner circle. Plahotniuc also controls Casa Media, which sells advertising space on the above-mentioned TV channels and on N4.

The country’s second most popular TV channel, RTR-Moldova, has several founding shareholders: a Russian NGO called the Russian Association for the Organisation and Management of Media and Mass Communication Projects (50%), and SB Grup Media, co-founded by Oksana Borșevici and Galina Sîrbu (25%). The remaining 25% stake belongs to businessman Valentin Stetsko.

“Their news reporting is biased and does us a great deal of harm. Nonetheless, local propaganda remains far more harmful than Russian propaganda”

According to numbers released by AGB-Nielsen Media Research, which conducts TV audience measurement in Moldova, Russian news and analytical programming has never featured among the top preferences of Moldovan TV viewers. Last year’s biggest draws were the game show “Pole chudes” (“Field of Miracles”) and the talk show “Pust Govoryat” (“Let Them Talk”), both rebroadcast on Prime; an assortment of Russian series and films shown on RTR-Moldova and NTV-Moldova; and Moldovan news broadcasts on various channels.

Petru Macovei, for his part, claims that Russian propaganda exerts a genuinely harmful influence on Moldovan TV viewers. “Their principal narratives are anti-European and anti-Moldovan in nature,” he says. “Their news reporting is biased and does us a great deal of harm. Nonetheless, local propaganda (i.e. by Moldovan political figures and oligarchs -ed.) remains far more harmful than Russian propaganda.”

Meanwhile, Electronic Press Association executive director Ion Bunduchi asserts that Russian propaganda “was and remains” a threat. “A country’s infosphere ought to be dominated by content produced in that country, but this has never been the reality in Moldova since it came into existence,” maintains Bunduchi. “On the other hand, a responsible state will utilise radio frequencies — a limited and valuable resource — to keep its citizens informed instead of squandering that resource to fulfil other purposes, as remains the case to this day.”

The bountiful battle against Russian propaganda

Also noteworthy is the fact the Democrats first declared war on Russian propaganda as early as 2015. That year, a group of Democrats and Liberal Democrats drafted a bill that banned the rebroadcasting of Russian news (the latter would subsequently withdrew their signatures), as well as stipulating the principles of journalistic work. When quoting anonymous sources, for instance, journalists would be expected to add that the information in question didn’t correspond to reality; by the same token, news bulletins concerning state institutions would be green-lighted only if they were accompanied by a comment from them.

This draft law also required broadcasters to air at least eight hours of domestically produced content a day, the bulk of it in prime time. Following a scandal, all stipulations regarding journalistic work were excised from the bill, leaving only the ban on rebroadcasting Russian news and the domestic content requirement.

The NewsMaker.md portal then discovered that, for all the noises being made by the Democrats about the need to ban Russian news, the bill had been created solely to increase the mandatory proportion of domestically produced content. According to the portal, the bill was developed with the involvement of the management teams of Plahotniuc-affiliated TV channels and the sales house Casa Media.

The issue is that Moldova’s TV networks tend to fill their prime-time slots with entertainment shows, films or series produced in Russia and in other countries. Domestically-produced content doesn’t enjoy a great deal of popularity and is more expensive for the networks to acquire. Furthermore, a NewsMaker.md source reported that Vladimir Plahotniuc, who has built the expensive Media City Chișinău production studio for his TV channels, was disgruntled with the fact that his media assets were making a loss — and therefore set out to render them profitable. Other television networks lack the resources to create their own content.

“If you put all these things together, what becomes apparent is a desire to overhaul everything and squeeze out unwanted market players”

The idea of ​​banning Russian news and analytical programming has met with criticism from the OSCE and the Council of Europe. The Democrats’ first draft bill aimed at combating Russian propaganda was approved in the spring of last year, minus the just-mentioned ban. Of the enormous catalogue of measures drawn up in 2015, only the domestic content requirement survived (eight hours of Moldovan-produced content daily, with six hours to be aired in prime-time, of which four hours’ worth must be Romanian-language programming). As a result, the networks all continued their work, but the cost of advertising grew by 40%-100%.

According to Ion Bunduchi, the ban on Russian analytical programming will lead to even greater expenditure for TV networks. “Replacing [the large volume of] informational, analytical, political and military programming […] is going to cost a lot of money,” says Bundichi, “because [the networks] will be forced to replace [news broadcasts] with their own content, or to acquire it from elsewhere. Both options will prove very costly for TV and radio broadcasters and cable operators.”

Petru Macovei stresses that the Russian news ban should be considered in the context of other media-related developments in Moldova, the newly-introduced requirement on domestic content being a case in point. “If you put all these things together, what becomes apparent is a desire to overhaul everything and squeeze out unwanted market players,” Macovei concludes.

By Nicolai Paholinitchi, for Open Democracy

Nicolai Paholinitchi is a journalist for the Moldovan publication NewsMaker.md. He reports on business, economics, Moldova’s media landscape and events in the unrecognised state of Transnistria.