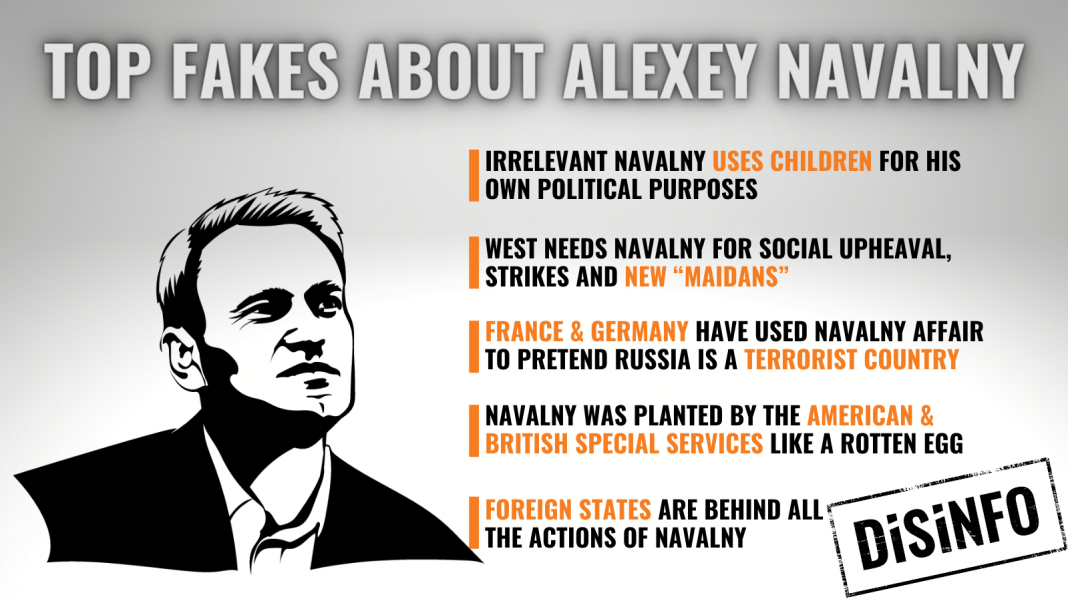 Poison didn’t kill him, imprisonment didn’t silence his investigations, but perhaps denigrating protesters would do the trick?

Back in 2019, we wrote about how RT published 1,973 videos about the Yellow Vest protests in France but only 10 about protests in Moscow. This week, protests in support of Alexei Navalny took place in almost 120 Russian cities and nearly 4,000 people were detained. Considering that RT’s YouTube channels published about 15 videos about protests, even the Kremlin must have understood that it is impossible to keep quiet about them.

Instead, pro-Kremlin media unleashed its full disinfo-fury: the opposition’s real aim was said to be a plot by feminists and perverts to stop children from being born. And while on the subject of children, Navalny was claimed to use them for his own political purposes.

But this was just a warmup. Pro-Kremlin media also claimed that Navalny’s actions are orchestrated by foreign states that need him to instigate social upheaval, strikes and new “Maidans”. This is allegedly why American and British special services planted him like a rotten egg and authored the investigation into “Putin’s” palace, which revealed “nothing new”.

In addition, some recycled narratives claimed that Navalny was not poisoned in Russia or that his medical problems were caused by acute metabolic disorder due to the chronic pancreatitis. As usual with topics high in the agenda, these assertions are in conflict with previous claims like “Navalny was not poisoned”, “his friend poisoned him”, “Khodorkovsky is the suspect”, “he could have caused the coma himself” or “he might had been poisoned in Germany”. But then again, isn’t the true job of the pro-Kremlin media ecosystem to make sure the public is properly confused and disinformed?

In addition to Navalny, disinformation this week targeted new US President Joe Biden by calling him a “president’s shell” and “formless as a ghost from “Harry Potter””. As for the plans of the new US administration, pro-Kremlin media predicted that Biden may “instigate war with Russia”, enter into a conflict with Russia, China and Iran and try to carry out “orange revolutions” in post-Soviet countries.

Following the logic of pro-Kremlin media, non-existent democracy and “dictatorial practices of censorship” in the US will probably allow Biden to achieve the aforementioned goals. But then again, what else could pro-Kremlin media say about a man whom it accused of staging a colour revolution to seize power from his predecessor Donald Trump amidst massive electoral fraud.

Sounding a bit like Tina Turner yelling “Simply the best! Better than all the rest!”, pro-Kremlin media tried their best to persuade audiences that in comparison with the Russian product all other countries have inferior vaccines. To support this point, the West is allegedly waging a global information war against Sputnik V, accompanied with made up or exaggerated issues related to Pfizer’s vaccine.

Just as the question of vaccines and vaccine-hesitancy, the US policies or the future of Russia affect all of us. As for the question asked in the title of this article – why should it be different this time? – it depends from which perspective you see it. Despite yet another pro-Kremlin disinformation attack on Navalny, people still took to the streets in great numbers to support him. And Navalny himself? Well, it takes courage to fly back home to face detention, especially with an airline called Pobeda – “victory” in Russian.