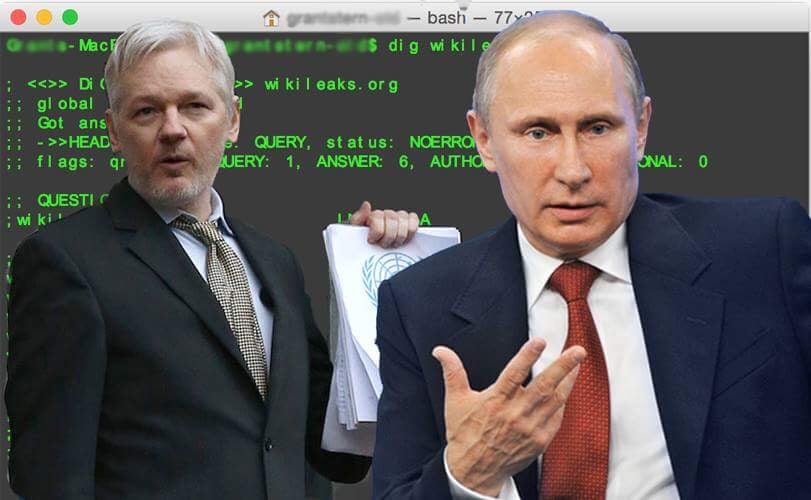 Former Wikileaks & cyber activist Laurelai Bailey just used open source information to accurately prove that Wikileaks is being transmitted physically from within Russia. This story contains independent confirmation of her claim. She wrote:

It makes no sense for people who claim to be for transparency to take up virtual residence in an autocratic nation that might try to kill them. So why would they do it? Well, it’s pretty simple; they would only be there with the consent of the Russian government, i.e. Vladimir Putin. He wants them to be there and allows them to be there.

So that strongly suggests Russia is getting some kind of favorable or special treatment. Its also likely that the CIA was already aware of this and that this is part of the information they base their claims of Russian interference on. When you see this alone its enough to strongly suggests collusion with the Russian government either directly or indirectly.

Internet records prove that Wikileaks changed their physical DNS server location and IP address to a Russian web host just days before the Podesta leaks began, moving on September 30th, 2016. This means that a Russian company knows the true physical IP addresses and presumably locations of the Wikileaks servers. This is a list of the IP addresses currently used to host Wikipedia.org. It includes 141.105.69.239: The Domain Name System translates website names into numbers, which it then uses to connect the internet’s many requests to view websites.

A WHOIS search of the IP address 141.105.69.239 reveals that the web hosting company and technical contact are all in Moscow (arrows) and that the changes were in fact made on September 30th, 2016 (blue highlight).

Wikileaks.org is hosted by the Russian company HostKey.

Here are the raw results of the query from which the image above was generated.

These web versions of DIG and WHOIS are available for less technical users to view the same results from independent websites, and these links run the same queries used to confirm this report.

Laurelai Bailey and former British MP Louise Mensch – and now News Corp. executive in New York – both investigated and drew very strong conclusions about the web host that is serving Wikileaks.org from Moscow to the world. Bailey alleges the host is implicated in criminal activities.

Notably, Bailey was raided by the FBI in 2011 for her cyberjournalism activities for Crowdleaks and questioned for her associations with Lulz and Anonymous hackers, but not a criminal suspect. She was not inside of Wikileaks, but was a part of the sympathetic transparency movement in America’s independent journalism community. and as far as this story is concerned, her information is all factual.

What is key to this story, is that the open source data points to Wikileaks serving its stolen emails and pilfered CIA secrets directly from Russian soil, via a Moscow-based web host – and they made the switch mid-election.

Bailey speculates that the Russian web hosting change is the digital clue which led Americas Intelligence Community to conclude that Wikileaks is colluding with Vladimir Putin in his scheme to assist Donald Trump to win last year’s elections.

American experts have strongly believed Wikileaks to be a Russian front since 2015, this casts further suspicion that Putin is allowing Assange’s website to operate openly from Russian soil, with a Moscow-based business.