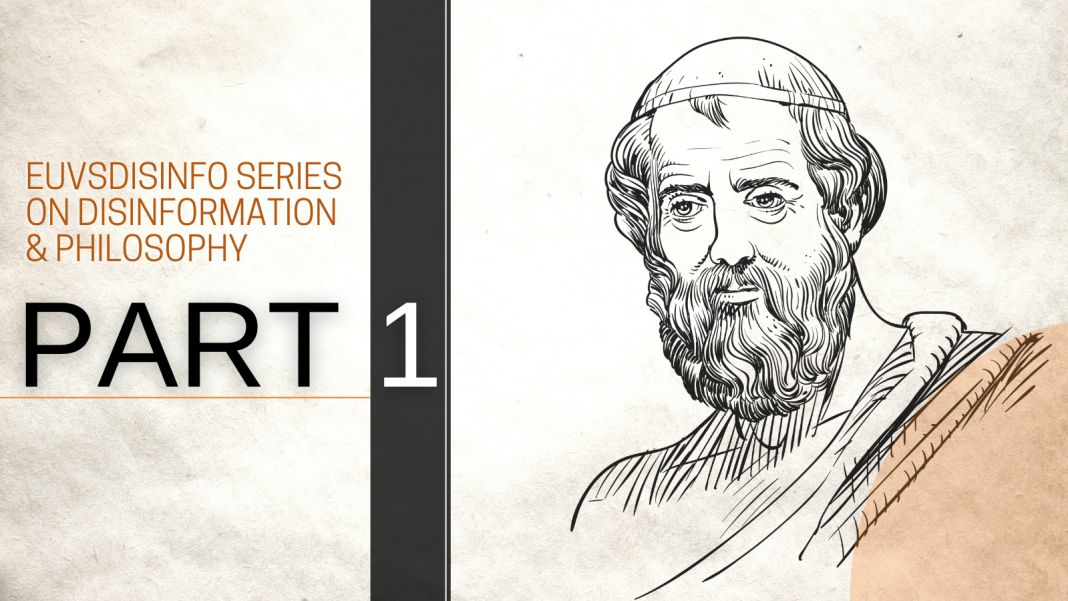 Series on Disinformation and Philosophy

Where is disinformation? This probably feels like a somewhat strange question.

Of course, we could point at the websites of Sputnik or other perpetrators of disinformation. However, it feels like we are missing something.

Broadly speaking, an idea is an entity (thought, concept, sensation, or image) actually or potentially present to consciousness, to the mind. Therefore, we asked what the greatest thinkers in the history of philosophy would make of disinformation.

This summer, we will publish a series of articles on this question. Of course, we cannot promise any definitive answers, but we hope that by raising better questions, our understanding of disinformation will nevertheless benefit.

It is a cliché, but the acclaimed philosopher Whitehead famously said: “The safest general characterisation of the European philosophical tradition is that it consists of a series of footnotes to Plato.” Therefore, we assume it is proper to kick off our series with this giant of thought.

Plato, who lived from 429(?) until 347 BC is, by any measure, one of the most captivating writers in the Western literary tradition. His thoughts, often voiced by Socrates, are recognised as the deepest, most wide-ranging, and influential in the history of philosophy.

The core of his thinking is the understanding of reality as having two dimensions: we can perceive the material dimension (which is ever-changing) but this consists of mere derivates (shadows) of the higher dimension, which is eternal and immaterial and can therefore not be perceived by us using our senses. Plato thought this second dimension was more valuable and should be the orientation of human life and activity.

Plato, an aristocratic citizen of Athens, witnessed the city’s turbulent times, and his works reflect the political events and intellectual movements of his time. The questions he raised, however, are so fundamental, and the way he tackled them so provocative and inspirational, that he has influenced philosophers, scientists, artists and ideologists of nearly every period after him.

The technological automation of Athens was writing and reading itself.

Roughly until then, poems, science, drama – everything was mostly saved in memory. The alphabet allowed simple and uncomplicated means of saving texts and making them accessible for others.

Some have argued that the works of Plato can be interpreted as reacting to an “infodemic” in fifth-century Athens, which was attributable, in turn, to the technological revolution of alphabetic writing.

Plato’s student and philosophical rival Aristotle was nicknamed, by Plato, The Reader for a reason. It was considered special and dangerous (!) that someone acquired knowledge purely from text.

Plato’s solution: stepping outside the Cave of Untruths

Plato was not entirely happy about the rise of readers. He feared that people would follow texts blindly.

Answering to this threat, he came up with something radical: the pure ideas. Behind the scenes, behind the phenomena we perceive, these ideas – metaphysical, semi-religious entities – structure the material world. These absolute truths are somewhere “out there”.

The famous allegory of the cave symbolises this. In short, we humans are all in a cave, and can only see shadows cast by the light of the sun, which is outside the cave and therefore cannot be perceived by us. The truth is behind the facts, behind the shadows, and can only be approached by the exercise of philosophy.

Crudely speaking, you could say Plato invented the abstract ideas to emancipate people to engage with text critically – to create duality between the text and the reader. In more modern words: to promote critical thinking. Perhaps this is also why he presented his ideas in the form of dialogues: to create a confrontation between different perspectives.

Problems of Plato’s logic: birth of the Conspiracy

As said, Plato’s influence is simply immeasurable. Sadly, his reach even extends to the current spreaders of disinformation. Many conspiracies draw from Platonic anti-materialism. A few examples:

The philosopher Dugin misused Plato’s thinking to delegitimise the work of journalists as not contributing to truth, as we wrote in January.

Also, the idea of eternity, drawing from Plato’s eternal forms, is very powerful in disinformation. The eternal Russia, connecting Peter the Great with Putin, the eternal Russia to which Crimea belongs. Russia fighting its eternal enemies: the US, the West, the (eternal) Nazis.

Is there a Philosopher on Board?

The rise of the text created chaos in Athens. Plato tried to give readers tools to think critically. Later in history, the rise of the printed text ignited Kant to come up with a framework for public debate. So the crucial question is: which philosopher will stand up now, in the times of digital text?