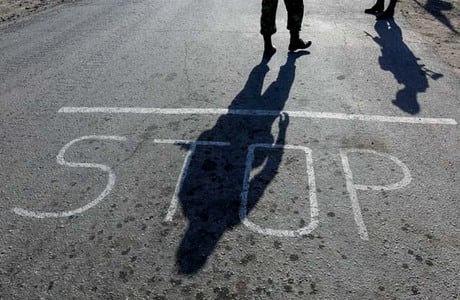 The war is here. The military warfare of David and Goliath – and also the enormous information war of the same scale waged against Ukraine. The first is very dramatic and tense, but with local impact and less visibility beyond eastern Ukraine. The second one is much more important because its influences can be felt everywhere in the world.

Russia understands the importance of the propaganda war and heavily invests with money and human talent into RT (Russia Today), The Voice of Russia, Ruptly and other sources of propaganda, fakes and falsifications – from Western pundits like Stephen F. Cohen to European members of parliament to possibly thousands of anonymous trolls busy on news websites explaining why the war against Ukraine is right and legitimate.

Ukraine does not have state propaganda and should not have, because truth will always win at the end of the day and you cannot battle one lie with another.

But while RT reaches 600 million viewers and set a record of 1 billion views on YouTube. By comparison, Ukrainian projects like StopFake.org have had six million visitors during its six months of existence.

When faculty and alumni of the Mohyla School of Journalism started StopFake.org in March, we did not expect this project would last beyond coverage of Russia’s invasion of Crimea. Debunking Russian propaganda became our main goal and we do not see an end to a very professional, Kremlin-run expensive war with global outreach and tremendous impact.

A group of seven volunteers at StopFake is busy every day debunking stories from Russian state and private media, social networks, from very primitive, easy-to-check photos from Iraq, Syria, former Yougoslavia to very elaborate stories like the Russian reporting of the July 17 downing of Malaysia Airlines flight MH17, killing 298 people.

Fact-checking and verification became our main weapon against fake stories. As Russian was initially one of the languages of the project (along with English), we not only reached out to Russian-speaking eastern and southern Ukraine (40 percent of the audience is Ukrainian), but also found a huge but unexpected audience in Russia (27 percent of the audience). Next are followers from the United States and Germany, with also growing interest in Belarus, Moldova and Kazakhstan.

Our project is supported through donations. One in three comes from Russia.

Another big surprise is the shift in Ukrainian preferences of social networks. With more than 115,000, we see a growing shift to Facebook and Twitter and away from Russian-controlled vKontakte and Odnoklassniki.

Also, almost one in six visitors to the website came from an English-speaking country.

The growing audience down’s mean the information war is being won. But Ukraine is holding its own because the Russian government is constantly flip-flopping and Russian media are lying and twisting facts.

Also, Ukraine has greatly benefited from favorable coverage by Western journalists who are sympathetic to the EuroMaidan Revolution, then to Ukraine’s loss of Crimea and now Russia’s aggression in the east. New sites like Vice, Mashable, BuzzFeed generate big traffic and a strong presence in social media.

But this might not last long. The Western audience is geographically and emotionally distant and there are many other conflicts in the world. So Ukraine needs to intensify its information warfare efforts and bolster its image abroad.

All journalists working in the east should have full access to events on the ground, speakers and information. The military should stop preventing journalists from working freely in anti-terrorist zone or hampering their activities. National Security and Defense Council briefings should again become the platform for open questions. Journalists are on a truth-finding mission and they are our biggest allies.

All Ukrainian embassies should explain why we fight this war, using social media, because it costs little. They should reach out to different audiences. They should battle Russian propaganda by showing photos and videos of the Russian military occupying Ukraine.

Ukrainian diaspora should take more decisive stand. We should finally realize that there are no ultimately pro-Russian or pro-Ukrainian governments. There are governments that stand for their national interests. And Ukraine is not one of them. So we should move from demonstrations to more systematic activities to lobby Ukrainian interests among political parties and policymakers, push them to adopt more pro-Ukrainian stance and provide more support, including military support and monitor more aggressively anti-Ukrainian activities.

Every Ukrainian can also find a way to contribute to this information war. Do not consume propaganda. Think critically. Speak up. Or do what the Israeli government asked students to do in 2013 – go and write comments to materials on Israel. When the war is here, all ideas are priceless.

By Yevhen Fedchenko, director of the Mohyla School of Journalism (Kyiv Mohyla Academy) and co-founder of StopFake.org, for KyivPost.