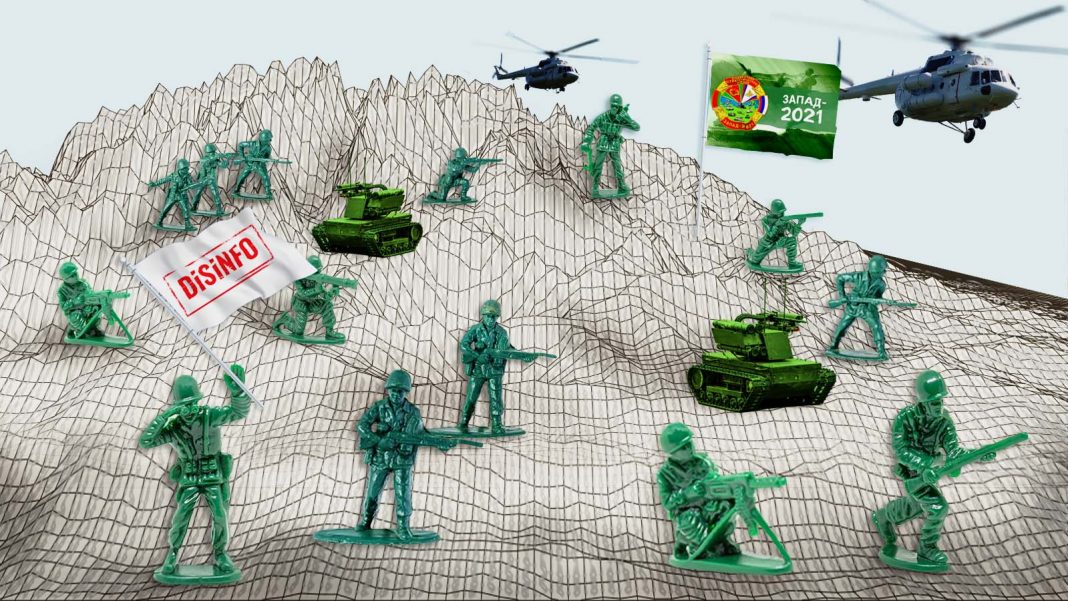 The Zapad (West)-2021 military exercise did not just put Russian weapons on display but also Russian disinformation and propaganda.

It was the latest iteration in a series of military exercises by mainly Russian and Belarussian forces in Russia’s Western Military District that takes place every four years. Zapad-2021’s active phase, between 10 and 16 September, was preceded by seven months of preparations.

Both during the exercise and in the preparation phase, pro-Kremlin outlets pushed out a barrage of misleading information, twisted half-truths, and blatant lies.

Bad and aggressive, but also clumsy and amateurish?

The exercise was used to attack the West with all-too-well-known disinformation narratives and cheap rhetorical tricks.

In support of the besieged fortress narrative directed at audiences at home, NATO-, US- and other Western-led exercises were portrayed as aggressive, dangerous and destabilising. By contrast, Russian-led exercises were allegedly defensive and benign, a natural response to Western provocation.

In pro-Kremlin disinformation parlance NATO and the West were guilty of the following, and more: trying to goad Russia into ‘losing its temper’; Russophobia; violating Russia’s territorial integrity; using Ukraine as a springboard from which to invade Russia; supporting an alleged neo-fascist government in Kyiv; and nothing less than destroying the world’s security system from the Caucasus to the Korean peninsula.

Disinformation narratives from pro-Kremlin outlets showed yet again perpetual hostility and belligerence by the West, while presenting Russia’s moves as an understandable response to NATO and US power, particularly on Russia’s western borders and in the Black Sea region.

Oddly enough, where NATO and other Western countries were aggressive, according to pro-Kremlin portrayals, they were depicted at the same time and by the same outlets as amateurish and hopelessly clumsy. Apparently, NATO is after all weak, divided, humiliated, utterly irrelevant, and also facing ‘imminent collapse’.

The pro-Kremlin outlets’ coverage of the build-up to Zapad-2021 and of the active phase of the exercise was bursting with stories of military muscle and might.

There was coverage of Russian military activities designed to show how Russia was dominant: military aircraft conducting training flights, radar drills and naval patrols. There were countless stories about technological innovations such as new combat robots ‘that can take down tanks without putting soldiers in harm’s way’. It all appeared like pro-Kremlin outlets had been tasked in huffing and puffing to their best ability to erect a Potemkin-style image of Russia’s strength and invincibility in comparison to a NATO in disarray.

While the Russian show of force and lack of transparency concerning Zapad made NATO and many EU member states rightfully concerned about the true intentions behind the exercise, its portrayal by pro-Kremlin outlets and supporting Telegram channels twisted reality. In their world, the EU’s concerns were excessive and East European countries were in a state of true panic; Poland and the Baltic states were spreading hysteria. Pro-Kremlin outlets clearly had trouble wrapping their heads around states acting in the best interest and safety of their citizens.

Stir the pot, steal the vote

To put the exercise into context, the most recent Zapad took place at a time of Russian military build-up near Ukraine’s borders, with tensions between Belarus and the West running high due to Belarus’ systemic use of illegal migrants to destabilise the situation on the Eastern EU borders. The exercise was also organised right before the Duma elections in Russia in September, riddled with a number of violations and offering limited options for Russian voters.

Zapad-2021 provided Kremlin disinformationists with a platform to deliver a multi-pronged attack targeting audiences both home and abroad. The disinformation narratives recycled the same old themes according to which aggressive, but clownishly clumsy Western states were threatening benign, defensive, but militarily superior Russia. For those seeing through the barrage of disinformation it is clear that such a propped-up self-image does not stem from a sense of real strength, but from a deep feeling of insecurity.