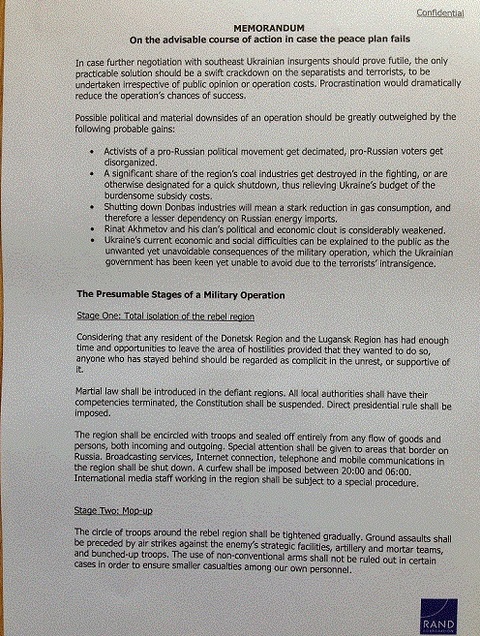 July 3 the site Beforeitsnews published a memorandum, allegedly prepared for the President of Ukraine Petro Poroshenko by American research center RAND Corporation. In the document attached, consisting of two pages, Ukrainian authorities are recommended to undertake the strictest measures in case of peace plan failure on the East of Ukraine. Particularly the second stage of plan assumes territory occupation. According to it armor shall go into cities and fire at anyone who bears arms. All the male adults shall be relocated into internment camps. Activists shall be tried in court. The property of convicted shall be nationalized and awarded to the servicemen who would be distinguished during the operation.

But this information does not correspond to the facts. Stopfake send a request to RAND Corporation. We asked if this document was authentic, if the center conducted research for Ukrainian government and what was the main activity area of RAND. We got the following answer:

“1. We did not write the memo and have no involvement formally or informally in advising Ukraine on its military strategy towards re-establishing central government authority in Eastern Ukraine.

2. We are not providing research or analysis for President Poroshenko or the Ukrainian government at this time. One of our economists, Keith Crane, took part in a US Embassy-sponsored seminar on trade policy in April 2014.

3. We do provide research and analysis on public policy problems for many countries around the world.”

Russian information agency ITAR-TASS wrote that its American correspondent also got a refutation from RAND Corporation.

Besides, Stopfake asked a professional translator and English native speaker to comment on correctness of this “memorandum”. He found some mistakes, enough to conclude that the text was not written by a native speaker. There are no strong proofs that initially the text was written in Russian and then translated in English. But nevertheless the text is of quite a low quality to be written by one of the highly professional researchers of RAND Corporation.

And finally it is very important to mention that Beforeitsnews, founded in 2008, was planned as a portal of citizen journalism. As in Wikipedia or LifeJournal, anyone, who feels like it, can publish an article there. And more and more articles about ghosts, aliens and conspiracy theory have been appearing on the portal lately. For example, one of the most popular articles is “Creepy Demon Photo Captured In Hospital Over Dying Patient”.