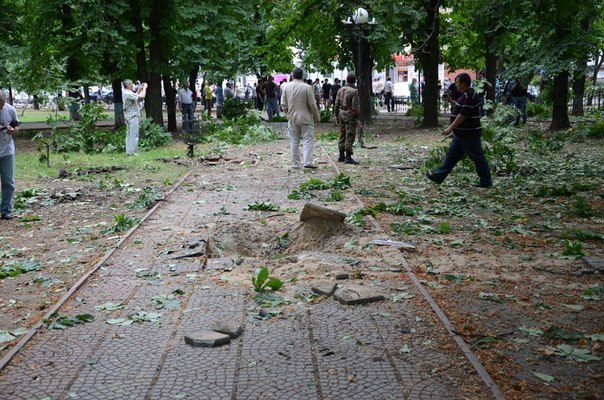 On the 2nd of June, there was a very powerful explosion near the Regional State Administration (RSA) in Luhansk. There were multiple fatalities, including civilians. The blast damaged the surrounding area and the RSA building. An air force fighter jet was flying over the city at that time, presumably a Su-25; it fired at least once, as was captured on video.

Since there have so far been no video recordings presented (which would show the rocket’s continuous path all the way from the plane to the ground), multiple theories been proposed regarding the incident. We shall try to analyze the dominant ones.

Theory: the RSA building was hit by a rocket fired from a public square, out of an MPADS [Man-Portable Air-Defense System – rocket launcher].

This theory is based on the recording from a video camera, which is located on the so-called “House with a steeple”, at 64 Sovetskaya Street. The Square of Heroes of the Great War is visible from that house, especially the square’s left part, where the RSA building is located.

Right before the explosion, in the video, there is a flash near the [memorial] statue standing in the square. Many people counted this as a flash from an MPADS being fired, which would be the cause of the resulting death and destruction.

Here is the moment of the flash, recorded on that webcam.

Here is that spot on a panoramic image Here is a bird’s-eye view of that spot It is evident here that the location of the flash is not right beside the RSA central entrance, but much closer to the webcam. This means that if a missile had been fired at the central part of the building (which is the part that was damaged, especially on the left), then the trajectory of damage would be only from the flash location to the central part of the building. However, on many videos we can see that the area of damage is much greater than that. The square has big shell craters in its ground; some are in sidewalk tiles. Judging by their appearance, they were caused by missiles coming from above, and not from the side, or from the height of a human. Furthermore, many large branches are visible, having fallen to the ground. Here is a video of the square; shell craters are evident, along with fallen branches, and the damaged RSA [building]:

The video portrays at least four craters; therefore, they could not have been made by one shot from an MPADS.

Here is another video, taken in a central alleyway:

These video recordings also disprove the claim that the cause of the destruction was an explosion from inside the building.

Judging by everything, the first flash was the start of the explosions that followed.

There is also the opinion that the MPADS operator was firing at a Ukrainian plane, but the missile was distracted by the heat of an air conditioner, installed on the RSA building. This is also false. The outside part of an air conditioner gives out only minimal heat, which cannot be detected by the missile’s heat-seeking system. The temperature of a fighter jet’s turbine engine, to which the MPADS missile would react, is 600-700 degrees [Celsius]; the temperature of flares, which a plane would let off to fool a missile, is 2500 degrees [Celsius] (source of data).

An assertion is also going around, that the shot was made from the SBU [Security Service of Ukraine] building, which is located at 79 Sovetskaya Street. If judging solely by the trajectory, such a shot is possible:

However, this would not explain the multitude of craters; each of them was, evidently, caused by a shell.

Theory: the plane was not firing, but was letting off flares to defend against missiles. This is untrue. Here is the moment of the shot being fired. We can see that there is not one bright spot. Here is a video with the moment of the shot:

This is what flares look like, burning at 2500 degrees [Celsius]: Here is a video of flares being set off: