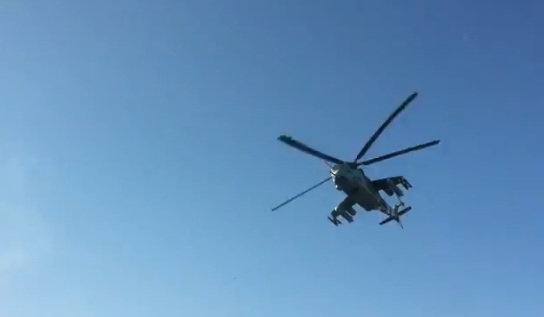 There are two main versions of events with respect to the attack on the 51st Motorized Infantry Brigade checkpoint, located near Volnovaha, Donetsk Region; 16 Ukrainian soldiers died as a result of the attack. The first version is being circulated by Russian mass media, and it states that the soldiers were killed by mercenaries, hired by the Governor of Dnipropetrovsk Region, Ihor Kolomoyskyi; he is also the owner of PrivatBank.

According to the second version, it was separatists who attacked the soldiers.

Here is the edition of the news program Vesti (En: “News”), on channel Rossiya 1 (En: “Russia 1”), where the first version is presented.

At 1:00 [in the video] there are Ukrainian helicopters shown, flying over the scene, and shooting. The voice-over says:

“Military helicopter of the Ukrainian Air Force is shooting soldiers of its own Ukrainian Army. It is making multiple runs at the checkpoint. The helicopter is cold-bloodedly destroying everything on the ground. Armored personnel carriers are catching fire due to the rocket attacks. A large portion of soldiers from the 51st Motorized Infantry Brigade is caught unawares, and is killed in the first few minutes. The wounded try to find salvation in the bush, but are finished off by bursts of gun fire.”

These statements are explicitly false.

Here is the complete record of the whole episode, during which the helicopters are circling over the Ukrainian checkpoint:

Before the arrival of the helicopters on scene it is evident that the checkpoint is destroyed, and that there are dead bodies in the field. Additionally, a major explosion on the road (at 0:30 in the video), and multiple smaller ones occur long before the arrival of the helicopters; therefore they were not caused by a fired rocket. Presumably, ammunition exploded inside a burning armored car.

Judging by the conversations of soldiers during the actions of the helicopters, there is no direct line of communication between them and the pilots, and the entire picture of events is not clear to anyone. At 6:05 [in the video] an officer speaking on a mobile phone tries to clear up where the helicopters came from, and why they are shooting. According to his words one man was wounded, whom he characterizes as “not ours”.

After the phone conversation, the officer (and also the soldier doing the filming), comes onto the road that the helicopters were just flying over. On the road, there are many civilians and military personnel, as well as ambulances.

Thus the statement that during the helicopter attack there were fatalities is a lie. This is further evidenced by the fact that the soldiers, hidden behind the truck, were perfectly visible from the air; not one helicopter shot at them.

Another argument made by Russian mass media, for the implication of Kolomoyskyi’s gunmen, is the fact that the attackers arrived on PrivatBank cash-in-transit vehicles. This is really true. However, first of all, the separatists have such vehicles as well; some of them were stolen from the bank earlier on, in late April. Second of all, in the video (where one of the gunmen, supposedly Igor “Bes” Bezler, tells of the killing of Ukrainian soldiers, and displays supposedly captured weapons), there is also such a vehicle. The allegations of the Russian mass media, that the refusal to follow Kolomoyskyi’s order (to shoot at peaceful civilians) was the cause of the murder of soldiers (done by, supposedly, their own kind), are entirely hearsay; these allegations are not supported by a single fact, and neither are the claims of the individuals depicted as witnesses. During the news story, one of the Vesti news analysts claims that the attack occurred at 4:30 in the morning. It is not explained why the “witnesses” are at the military checkpoint at this time of day.

However, there were unconfirmed internet reports later, which stated that the blog had been hacked.

Thus the allegation, of the Russian mass media, that the [Ukrainian Armed Forces] was shooting on their own is not supported by facts.