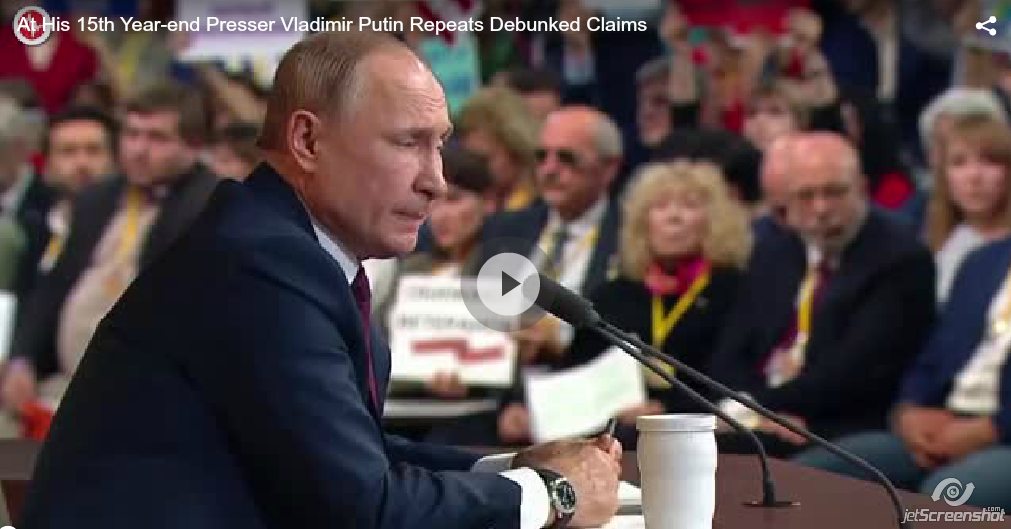 Russian President, Vladimir Putin held his 15th year-end presser on Dec. 19. With 1,899 journalists attending, it lasted for over four hours.

–“If WADA has no claims against our national Olympic Committee, then our team should be allowed to compete under its flag.” – FALSE

–– “Our citizen Maria Butina, she is a private individual, they took her, locked her up in prison for no apparent reason. What kind of agent is she?”– FALSE

Maria Butina plead guilty in a U.S. court to a charge of conspiracy to act as a foreign agent.

— “Such issues [the extradition of Zelimkhan Khangoshvili from Germany] have been discussed repeatedly at the level of the security services. There really was no official request through the prosecutor’s office, because our competent authorities considered it pointless, since they received, in fact, a negative answer. … This was an absolutely bloody killer. Only in one of the actions in the Caucasus, he killed 98 people. Think about that figure — 98 people. … He participated in organizing explosions in the Moscow metro.”– FALSE

The German authorities denied receiving any such extradition request from Russia. Zelimkhan Khangoshvili, who was shot and killed in Berlin in August, was neither on Russia’s list of terrorists nor accused of or even mentioned in connection with the seven bombings of the Moscow metro since 1996.