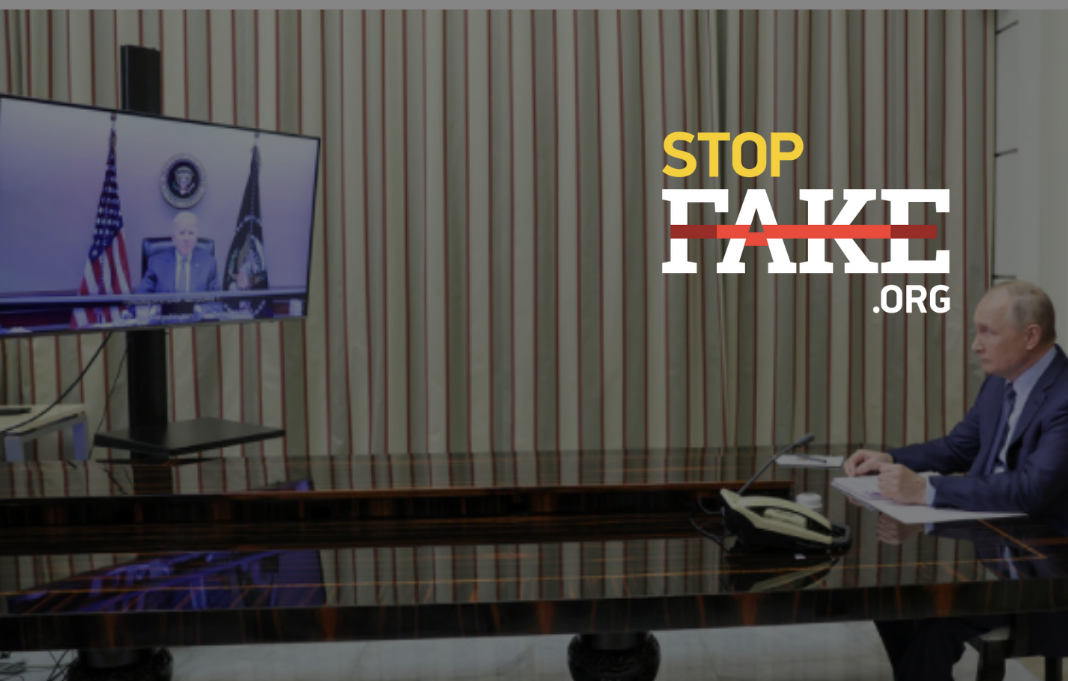 The virtual meeting of US President Joseph Biden and Russian leader Vladimir Putin was one of the most discussed events of this week. Against a backdrop of a possible full-fledged Russian military offensive against Ukraine, the two leaders met virtually on September 7. As expected, the Russian military escalation on Ukraine’s borders was one of the main topics of their conversation. This was widely reported in both the US and Russia, but with completely different interpretations.

The trajectory of Russia’s reaction to the virtual meeting of the two presidents was set by Putin’s press secretary Dmitry Peskov even before the meeting had taken place, when he called the upcoming Biden – Putin talk “a working conversation” and declared that nothing special would come of it. A little later Putin continued in a similar vein calling the meeting “a protocol event”. Russian media read the messaging loud and clear and proceeded to report accordingly.

Russian federal channels promoted the idea that the Biden-Putin meeting was just “a routine moment in the busy schedule of important domestic tasks”. On the evening of December 7 while the two presidents were still talking, the Rossiya 24 state channel aired the propagandist 60 minutes political talk show program which was devoted to the meeting of the two presidents. Pavel Zarubin, a correspondent for the Moskva.Kreml.Putin program who participated in that evening’s 60 minutes program, clearly liked referring to the meeting of the two presidents as a protocol event, using the term several times during his report and emphasizing that Putin went to meet Biden virtually after he opened a new metro station and held a meeting devoted to the economy (video from 17:15).

Yuri Ushakov, Adviser to the Russian President for International Policy, also tried to reduce the importance of the meeting. The next day, he considered it important to announce that although Putin and Biden held important negotiations, they “exchanged compliments and jokes” at the same time.

Russian media appeared to like this tone and eagerly reported that several jokes were told during the meeting as “our president knows and likes working in such a way”.

No plans to invade

The theme of the “working conversation” and “protocol event” did not appear by chance. The Kremlin is “clearly perplexed” as to why Biden should talk about military aggression against Ukraine, if Russia is not planning to attack. It was with this thesis that Konstantin Zatulin, First Deputy Chairman of the State Duma Committee on CIS Affairs, began his speech in the aforementioned 60 Minutes program. According to Zatulin, Biden decided to ride the topic hostilities for personal gain: he could claim he stopped Putin from attacking, but Putin was not planning to attack Ukraine anyway (watch from 11:10).

Federation Council Foreign Affairs Committee First Deputy Chairman Vladimir Dzabarov added his voice to the choir. In an interview with the internet newspaper Ridus, Dzabarov said that Putin “explained to Biden that Moscow has no plans to invade Ukraine.”

Other Russian talking heads took up the theme as well. “The United States strictly demanded from Russia not to attack Ukraine. Russia did not attack Ukraine because it did not intend to do so. But in fact, it seemed as if Russia met the US halfway. The Biden administration declared with relief, that it averted the war with threats of crushing sanctions,” Russian political analyst Fyodor Lukyanov declared.

“It is important that while the Western media are stirring up military hysteria around Ukraine, coming up with new scenarios and timing of the attack on Nezalezhnaya, (dismissively using the Ukrainian word for independence in referring to Ukraine) the heads of Russia and the United States remembered that they were allies during the Second World War,” a journalist from NTV oted.

Watching Russian news programs discussing the Biden-Putin meeting, one will conclude that Russian will not attack Ukraine. But it’s a completely different situation when it comes to Russia “defending its own population in Ukraine. While there was no direct threat from Russia that this will happen, the Kremlin once again resorted to its favorite anti-Ukrainian tropes, the alleged “attack on the Russian language”, “Ukrainian violations of the Minsk agreements” and “Nazism”. According to Putin’s aide Yuri Ushakov, Putin presented “all these facts” to President Biden during their meeting.

“Of course, Ukraine took up a lot of time during the meeting. Our president informed in sufficient detail about how Kyiv is not fulfilling the Minsk Accords…. He also mentioned the language bill that “intensifies the attack on the Russian language” the Izvestia newspaper quotes Ushakov.

State Duma Committee for CIS Affairs First Deputy Chairman Konstantin Zatulin, was much more radical in his pronouncements. On the 60 Minutes show, he assured that Russia had never attacked anyone (watch from 14:00) – “if there was no reason for this.” In his opinion, there was a pretext in 2008 in Georgia: then, according to Zatulin, Georgian President Mikhail Saakashvili attacked Russian peacekeepers in Tskhinvali, and Russia fought back. Russia also reserves the same right in relation to the self-proclaimed Donetsk and Luhansk People’s Republics (DN.

“If they start killing people (in the territories not controlled by Kyiv – ed.) Russia will help, regardless of what Biden says. There are 600,000 of our citizens there and that is not a trifle” Zatulin said.

Russian television channels also called upon the Donetsk and Luhansk People’s Republics to express their view about the meeting. Their view was unchanged, “Ukraine is a vassal of the United States”.

“One of the cornerstones of the discussion was Ukraine, and the conversation between the two leaders clearly showed that this country has lost its sovereignty. In this situation, the citizens of Ukraine should not have the illusion that precisely because of the position of their authorities, millions of Ukrainians today have become hostages of US policies” TASS quotes the chairman of the People’s Council of the so-called DPR.