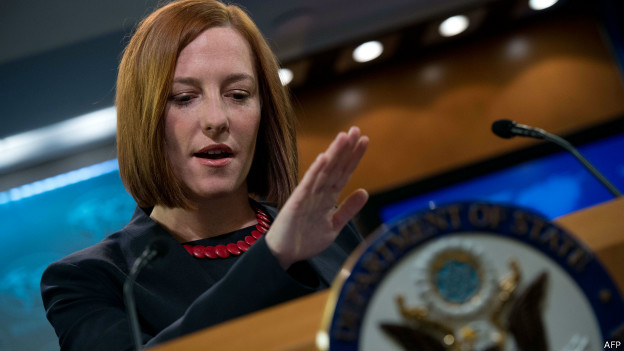 Russian TV-channel «Channel One» made up and voiced spokesperson for the United States Department of State Jen Psaki’s quote about Ukrainian refugees. It was read by Aleksandr Gordon, the front man of the «Politika» programme.

According to Gordon, during the US Department of State official briefing, Jen Psaki had stated that there had been no Ukrainian refugees in Russia and also, that the situation in Ukraine had been well and controlled by the US. After this, according to Gordon, a well-known Associated Press journalist Matthew Lee asked, what women and children had been arriving in Russia.

This declaration from Psaki would have been twice as ridiculous, considering that there are no mountains in Rostov region.

Yet, the spokesperson for the United States Department of State has said nothing like that. Russian news website Slon contacted Matthew Lee to learn the details.

«I have never heard her saying anything like that, » – answered Lee.

After this he wrote in his Twitter that he had not spoken with Psaki about the refugees in Rostov.

All:
I have never had an exchange with @statedeptspox about refugees and Rostov.#Ukraine #Russia

Also, there is no mentioning of Rostov and Ukrainian refugees in the transcripts, which are published on the State Department website.

The made up quote from Psaki went viral in Russian mass media. Later, one of the news agencies that spread it — «Rossiiskaia Gazeta» — also admitted it was a lie.

All: This report is false.http://t.co/GP01ajQhl8@statedeptspox

Recently Russian mass media have been criticizing Jen Psaki for her statements about Ukraine. In his turn, Matthew Lee asks her difficult questions all the time, trying to prove her incomptetence.