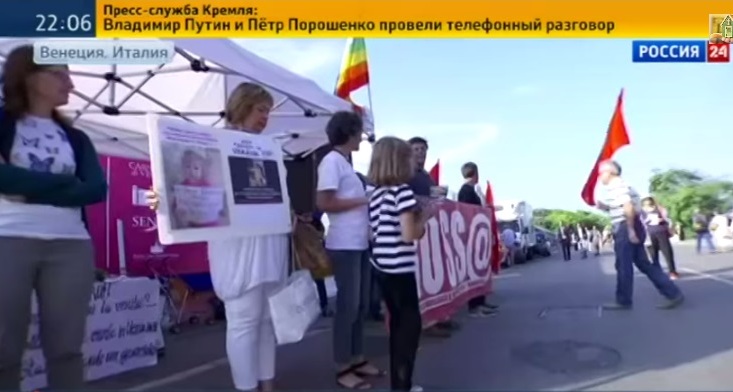 On September 6, Russian TV-Channel Russia 24 showed a video report about an alleged rally in Venice against the policy of Kyiv authorities and the genocide in South-east Ukraine.

The information about the alleged rally against genocide in Ukraine went viral in news feeds and social networks.

Yet, this information is not true. The Ukrainians who witnessed the rally filmed how Russia 24 shooting team was giving orders to the alleged participants of the rally.

The video description reads: “Unfortunately, we could not film the first part of the ‘freak show’, when they were telling the Russian speaking women what to shout and in which language.”

We attentively watched the video report of Russia 24 and the video provided by the eyewitnesses.

The following proves the rally was staged:

1. Russia 24 was the only news agency that filmed the rally. Another 25-seconds news piece about it was shown by Channel One — “Echo of Ukrainian Events in Venice”. Of course it can be assumed that after this channel filmed the rally, it was also filmed by another channels or photographers, yet we fail to find any materials to prove it. Everyone refers to Russia 24.

2. The cameraman and the journalist give clear instructions “shout it loud” and “do not smile”. Of course, it can be assumed the cameraman asked to shout louder for the sound to record better, since it was on the street. Yet, there is no explanation for the “do not smile” line from the journalist. News journalists and cameramen film real emotions. They may ask people to repeat their commentary, if they did not express their thought clearly, or if they are confused in front of the camera, but real journalists never ask people to fake emotions or order them “do not smile”.

3. All the alleged members of the rally understand Russian. They are addressed by the journalist and the cameraman. They did not use Italian or English, they used Russian. Though, there is a man in the video report who gives commentary in Italian: “We are Italian antifascists and we are against the war in Donbass. We are against imperialist Europe. We want to breach this wall of silence.” If there had been Italians or immigrants from Russia among rally participants, who could understand Russian, they would have been interviewed for sure. Since in this case there would have been no need for commentary and the live speech looks more convincing than the translation.

4. There is also confusion with who orchestrated this rally. The report states: “The rally was organised by the members of Italian trade unions and ‘For Antifascist Donbas’ commitee”, while in the commentary the unnamed person said: “we, the Italian antifascists”. By the way, why is the person unnamed, why did not he have the titles? When journalists interview rally organisers, they state name, surname and the name of the organisation. Of course, if there are more than three people from the same rally in the report, they may omit the titles. However, if there is only one person speaking about the rally, the viewers have to know his name and the organisation he represents. While in the video we see a nameless person commenting something in Italian.