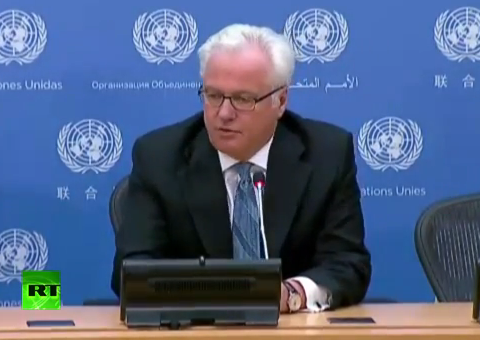 In his speech Churkin made several highlight declarations. StopFake focused on some of them.

At 10:14 of this video Churkin’s words are interpreted into Russia as the following: “I watched TV coverage and today madam Pillay announced that their calculations is that about 100 thousand civilians have been killed in the conflict”.

It appears that Churkin is talking about this report by the United Nations High Commissioner for Human Rights Navi Pillay. Yet, the Commissioner announced not about one hundred thousand perished people in Ukraine, but about 101,617 people fleeing from the area of combat operations to other parts of Ukraine.

As for the dead, according to the report issued by the Office of the United Nations High Commissioner for Human Rights, as of 26 July since the beginning of the anti-terrorist operation 1,129 people have been killed. In this report it is also emphasized that armed groups on the east of Ukraine continue to abduct, detain, torture and execute people, including teachers, students, miners and local politicians. According to the UN, there are more than 812 such hostages.

However, as Churkin spoke in English, we heared these words about perished people from an interpreter, whose speech totally muffles Churkin’s words. Later the UN published on its site the original which showed that this statement was misinterpreted. In fact, at 10:45 Churkin was talking about 11 hundred of dead men. Nonetheless, it was this distorted interpretation that was proposed to the Russian-speaking segment of Internet. In particular, TV channel Russia Today published it on its site.

Besides, starting from 12:00 Churkin burst into angry words concerning Ukraine’s decision to ratify an agreement with the Netherlands about the right of access of Dutch military men on Ukrainian territory. Herewith Russia’s representative in the UN repeated two times that the Verkhovna Rada (the Parliament) of Ukraine was dissolved and wondered how it can ratify the agreement in this case.

“Bizarrely, the Kiev authorities told them that they need to ratify that agreement. You know what is happening in Ukraine, the parliament was dissolved. I hope they would be able to recommune the parliament. I understand they are hoping to do that on Thursday. Will they have required majority, required quorum for this kind of a vote? To me it looks quite suspicious. Why it took so long for Kiev authorities to negotiate this agreement with the Dutch? The Dutch were trying extremely hard, along with the Australians. Their Foreign ministers were always on the ground negotiating with Ukrainian authorities. Why does it have to take, under such extraordinary circumstances, days and to sign it only after your parliament had been dissolved? And then to tell the people with whom you are negotiating the agreement that now it will require ratification? I do not want to use any strong words, but it looks quite suspicious”.

The fact that it was dissolution of the Verkhovna Rada that Churkin was talking about is confirmed by the reports on Russian news sites, for example, on RBK.

Firstly, the Verkhovna Rada of Ukraine was not dissolved and continues to work in the ordinary and usual course. On Thursday, July 24, the coalition of deputy factions ceased to exist in the Ukrainian Parliament. It gives President the right to dissolve the Verkhovna Rada, but no sooner than after 30 days and only if deputies do not manage to form a new coalition. At the moment the Verkhovna Rada is absolutely legitimate parliament of Ukraine.

Secondly, according to the laws and the Constitution of Ukraine, the right of access of foreign military men on the territory of Ukraine is liable for ratification by the Verkhovna Rada. The ratification of the agreement with the Netherlands is set on July 31. That is the day that an extraordinary session of the Ukrainian parliament is planned on.

This is a usual procedure and by no means can indicate that Ukrainian authorities are trying to delay the access of foreign experts to the site of aircraft crash. Moreover, experts from Australia, Malaysia and representatives of the OSCE work at that place already.

So, during his press-conference Vitaly Churkin used several untrue facts at the very list. Or he deliberately tried to deceive international community.