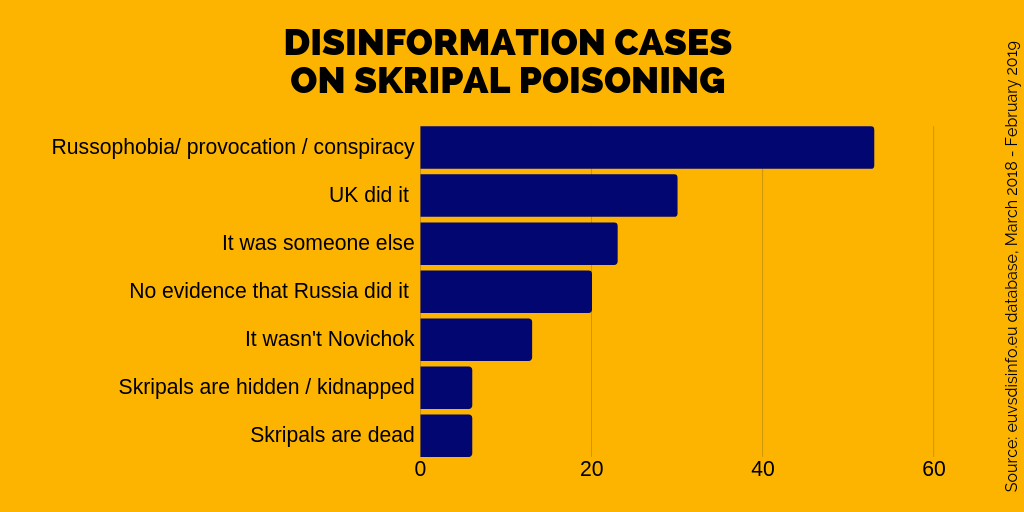 A couple of weeks ago, the Spanish-language pro-Kremlin media announced that the US military supposedly appropriated 40 tons of Syrian gold stolen by ISIS/Daesh. Now, the Italian-language pro-Kremlin media is alleging that the US actually seized about 50 tons of the stolen gold. The story was taken from SANA – an official organ of the Assad government that regularly promotes the conspiracy theory that the US is cooperating with jihadist forces. At the current rate, SANA will soon be claiming that the US seized more than a hundred tons of Syrian gold. But with helicopters transporting tons of it only the sky is the limit, right?

Continuing with financial matters: Kremlin-aligned media are once again trying to portray the EU as a failure, this time by focusing on problems with the euro. Apparently, thanks to the euro, Italians are now the EU’s poorest citizens and Italy itself is the Union’s poorest member. This case is a testament to the great emancipatory power of Google, because a cursory search reveals that Italy actually ranks 15th in terms of per-capita GDP across the EU28.

This week marks a year since two GRU-linked Russian assassins travelled to the English town of Salisbury, posing as hapless tourists keen to view the 123-metre spire of Salisbury Cathedral, and smeared a deadly, military-grade nerve agent on the handle of ex-spy Sergei Skripal’s front door in a botched attempt to fatally poison him. The operation not only failed to kill Skripal and his daughter, Yulia, but its mishandling and public aftermath reaped spectacular humiliation for the Kremlin and the Russian intelligence services.

Naturally, the pro-Kremlin disinformation machine has pursued frenetic damage control since news of the attack first broke, churning out all manner of denials, fabrications, and feverish conspiracy theories to obscure Russia’s responsibility for the poisoning, cast doubt on the findings of the British investigation, and find a scapegoat (or fifty) to blame for the attack. Here’s a look back at the (d)evolution of the pro-Kremlin media’s mendacious coverage of the Skripal case over the last year.

What happened to the Skripals? 150+ alternatives to choose from!

Since last March, EUvsDisinfo has compiled 151 disinformation cases about the poisoning that have been tailored to both international audiences and the domestic Russian public. The narratives can be roughly divided into seven categories:

1. It’s all just a Russophobic witch-hunt!
Following the tradition of much pro-Kremlin disinformation, most of the narratives about the Skripal case portray Russia as the victim of unfounded persecution, Russophobia, and anti-Russian provocation and conspiracy. According to Kremlin-aligned media, the Skripal affair is simply justification for increasing the NATO budget or fuelling anti-Russian hysteria in the West to lay the groundwork for a new Cold War. As a result of this deflection and obfuscation, only 3% of Russians believes that the Kremlin had something to do with the assassination attempt.

2. Britain did it!
At times, the originality of pro-Kremlin disinfo leaves something to be desired. Since the Skripal attack took place in the UK, suggesting that it was a British false flag operation was an obvious choice. Britain apparently had ample motive for such an attack: to trigger a boycott of the 2018 World Cup, to influence Russian elections, or to divert attention from Brexit (and from Britain’s “mass paedophilia” problem). The poisoning was most likely Theresa May’s idea, carried out by the British secret services at her request. Alternatively, though, the whole affair was an accident – the result of an internal control problem at Porton Down laboratory!

3. It was somebody else!
Even if Britain wasn’t responsible for the attack, there are plenty of other potential culprits to blame – but of course, Russia isn’t among them! Here, Kremlin-aligned media got creative, with a suspect list ranging from Georgia, Ukraine, Czechia, Slovakia, Sweden, and the US to terrorists and Yulia Skripal’s mother-in-law. 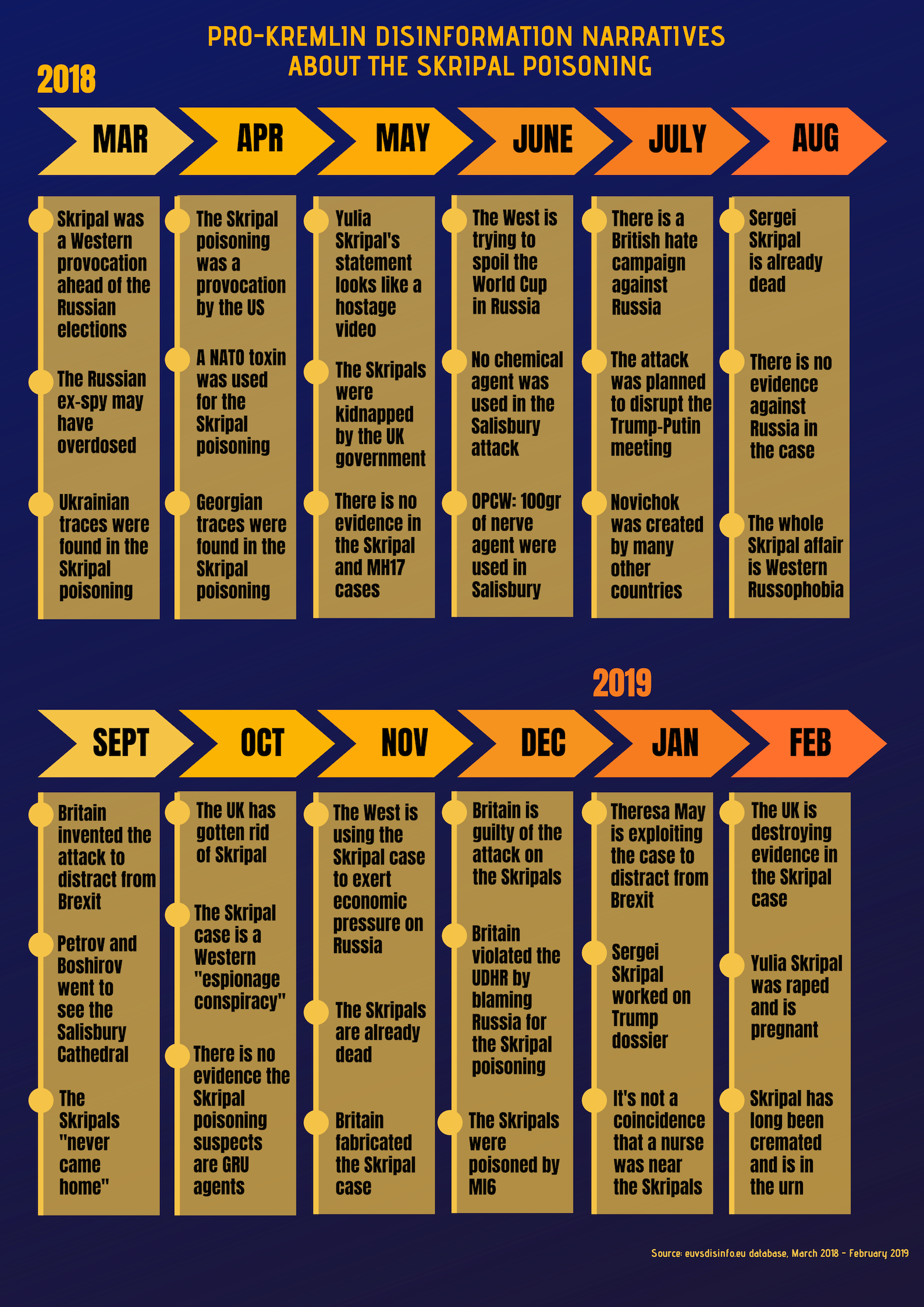 4. There is no evidence that Russia did it!
In its duty to deflect blame from Russian authorities and establish their “innocence”, the pro-Kremlin media regularly insist that there is no evidence in the Skripal case that implicates the Kremlin. Apparently, the British investigation into the attack has produced no proof of Russian involvement – the GRU agents identified as the would-be assassins were just “tourists” visiting Salisbury from London (twice in two days!) to see the “world-famous cathedral”. And anyway, neither the Soviet Union nor post-Soviet Russia have ever assassinated anyone!

5. It wasn’t Novichok!
Another set of narratives revolves around the use of Novichok in Salisbury. Pro-Kremlin media have not only claimed that no chemical weapon was used in the Skripal attack, but that Novichok doesn’t even exist – or, if it does, that it was manufactured by another country, and certainly not Russia! Most likely, Sergei Skripal just overdosed or tried to commit suicide.

6. The Skripals are kidnapped or hidden away!
Sergei and Yulia Skripal have either been kidnapped or deliberately hidden away to prevent them from telling the truth about the attack. The British secret services are most likely behind this, and are even preventing the Skripals from having any contact with their relatives.

7. The Skripals are dead!
After their alleged kidnapping, the Skripals were in fact killed and even cremated, according to pro-Kremlin media. London has sought to hide the truth of their death and even faked the interview with Yulia Skripal to bolster the deception. This conspiracy theory is likely to have a long life among pro-Kremlin sources, seeing as even the British ambassador’s official assurance that the Skripals are safe has failed to shut down this narrative.