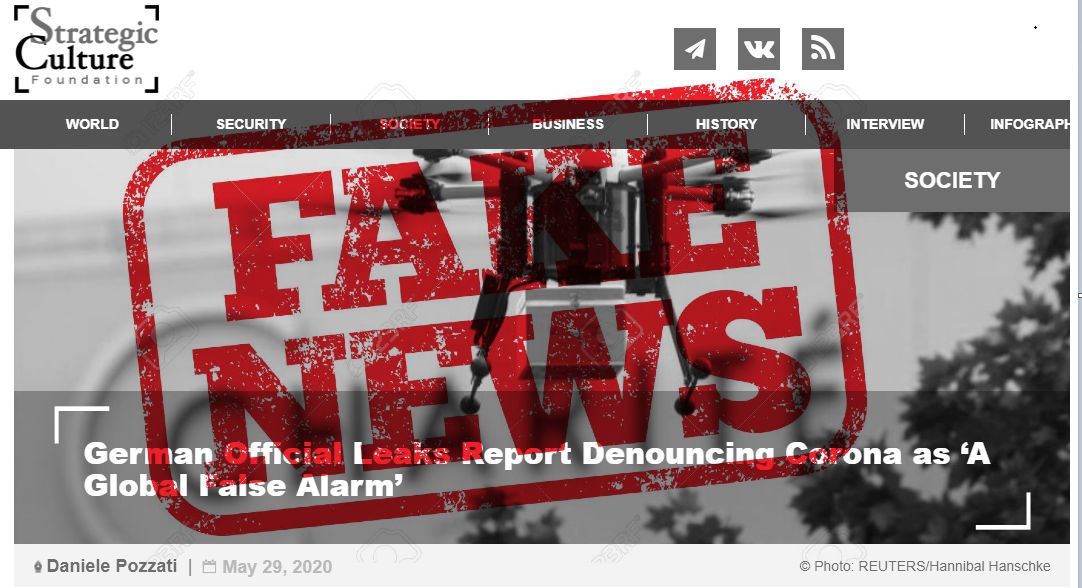 False flag operations are a considerable part of disinformation. As it turns out, there are also such activities during the coronavirus pandemic.

American “Bulletin of the Atomic Scientists” wrote about one of such operations in its report. As we can read, in the end of May “Strategic Culture Foundation” website informed that an alleged “German official revealed information that COVID-19 is a false alarm on the global scale”. The article was trying to prove that the measures taken in Germany “had more of negative impact than the virus itself”. As we read in the analysis, the text went viral and was shared 15,020 times.

Furthermore, the “Strategic Culture Foundation” is, despite its name, not a foundation, nor a cultural one. Its objective is not to inform properly. The only thing that is real, is that, in fact, it serves strategic objectives. Russian Federation’s strategic objectives. The magazine is in fact a front operation of Russian Foreign Intelligence and Russian MFA – states the “Bulletin of the Atomic Scientists”.

Analysts from the US point out that the fact of promoting such theories is very similar to the infamous Soviet Union operation from the eighties of the 20th century, when the KGB using specially prepared Western media held the “global disinformation campaign” accusing the US of using a newly discovered HIV virus as a “racial weapon”. At the time, the objective was to weaken the US diplomacy during the Cold War.

More about this subject can be found in the analysis by a famous Polish Sovietologist Grzegorz Kuczyński: https://tygodnik.tvp.pl

Today, according to the Americans, the fact that COVID-19 is included in the governmental propaganda activities, such as those of the “Strategic Culture Foundation”, should not surprise. The Americans are actually sure that the façade “Strategic Culture Foundation” is just a pick of an iceberg and there are many more similar disinformation portals. Some of them have been described by the Department of State of the US with use of their Moscow sources. Among them such websites as SouthFront and Global Research. They are known to spread narratives that the coronavirus was produced in a US laboratory, the WHO and governments lie to the world with the “fear pandemic” meant to let big corporations get

As the researchers from the “Bulletin of the Atomic Scientists” state, disinformation around the coronavirus pandemic is aimed to delegitimize those governments, which Russian Federation considers enemies. “It is worth noticing that Russian propagandists were especially active in propagating anti-American and anti-NATO narratives in whole Europe. For example in March on few pro-Kremlin websites a history was published. It argued that the American soldiers brought the coronavirus to the countries where they held military training”, we read.