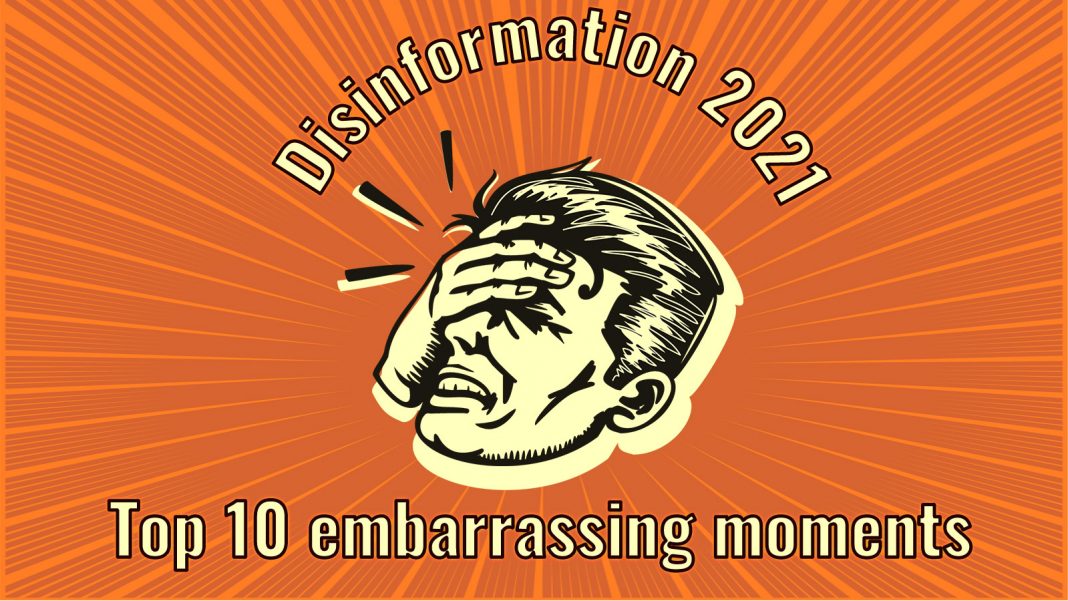 Web of lies spun by the pro-Kremlin outlets are often intricate. However, sometimes clumsy mistakes are made. We have collected 10 examples from 2021 where pro-Kremlin sources were caught in the act of producing absurd, way-over-the-top and particularly embarrassing disinformation.

After years of denial by the Kremlin, which did not stop EUvsDisinfo from uncovering and collecting evidence of Russia’s illegal annexation of Crimea, we now have unprecedented proof of Russia’s military presence in eastern Ukraine, from the Russian state itself.

In a criminal corruption case against a local food supply company, the Kirovsky District Court in the Russian city of Rostov-on-Don accidentally disclosed information about a food supply to the Russian army stationed in the self-proclaimed separatist republics in eastern Ukraine. The supplier was responsible for a bi-weekly shipment of 1 300 tonnes of food to the Russian troops in Donbas. A clerk from the company was found guilty of brokering a bribe of RUB 990 000 (USD 13 400) to a senior Russian military officer and was sentenced to five-and-a-half years in prison.

After Kremlin spokesman Dmitriy Peskov called the verdict’s reference to the Russian military a “mistake”, the document disappeared from the court’s website. An archived copy is available online.

2. The heroes and the villains

During an interview of a Belarusian parliamentarian on the Polish-Belarusian border, who highlighted the dire situation of the people stranded there and the humanitarian response of Belarus, uniformed, masked and armed guards, who are essentially keeping the migrants captive, are seen standing behind him. Pro-Kremlin media and state-controlled Belarusian TV use the images to portray Poland and the EU as inhumane and aggressive in contrast to Belarus, which is presented as a humanitarian actor. These pieces of disinformation distract from the fact that Alyaksandr Lukashenka is systematically exploiting human beings for his political purposes, capitalising on the harrowing images of human suffering.

3. The sexuality of Jesus Christ

Russian Minister of Foreign Affairs, Sergei Lavrov, used his 4 000+ word article on Russia’s Foreign Policy, principles, visions and ambition as a value-loaded attack on the Western education system. The Minister claimed that: “In a number of Western countries, students learn in school that Jesus Christ was bisexual”, which was quickly picked up and dismantled by the reporters. Russian independent journalists traced Lavrov’s words to a viral TikTok video. A child in Australia argues in the video that Jesus is ‘bi and non-binary’, as he loves everyone and he is a man and wears a dress. Not a very trustworthy source to include in a state document, we would argue, and recommend that the Russian Ministry in question double up on fact-checking its sources.

4. Masha and the Bear

On the bear topic, an outlet in Northern Russia mistook a joke from a satirical site as real news: Sweden places a five-year-old in foster care after his parents show him the forbidden Russian film “Masha and the Bear”. No, Masha and the Bear is not forbidden in Sweden; not even on April Fools’ Day.

COVID-19 and vaccines-related disinformation sadly kept increasing in number in our database. The year 2021 brought a new aspect in COVID-19 coverage by the pro-Kremlin outlets. Social media users pointed out the double standard of pro-Kremlin reporting on vaccines: while readers in Russian were encouraged to get vaccinated, RT and Sputnik English language versions called the pandemic a hoax and spread anti-vaccination claims.

6. Hunger riots in Europe over Christmas?

Food abounds in the West, but-pro Kremlin outlets claim that food shortages will lead to lack of Christmas delicacies on European tables and to hunger riots. While it is true that there were some minor problems with food supplies in the UK due to Brexit and shortages of truck drivers, food-fights, lack of medical supplies, fuel or police clashes are surely not taking place. Unless the outlet meant La Tomatina, but even this tomato war has been cancelled due to the pandemic.

7. Digital Beard and Shortage of Men

Asexual emojis caused an upheaval among Russian parliamentarians who accused the West of deliberately attacking Russia, the last bastion of masculinity, with bearded women and feminine men.

Strangely enough, the Russian state-owned institute for public opinion, VTsIOM, published a survey on real men, outlining the qualities of manliness. The survey, picked up by several pro-Kremlin outlets listed the following assets of real men: honesty (19 %), reliability (14 %) and accuracy (9 %). However, out of 1 600 people, 45 % of the respondents could not name one single “real man” in Russia.

8. Criminal snowman and a TV box

The historic white-red-white flag became the symbol of the mass protest movement that followed the disputed 9 August 2020 presidential elections in Belarus. Thousands of people were arrested or fined. Among them a homeowner whose yard was adorned with a snowman sporting a red scarf with an inscription “Long Live Belarus”, a woman wearing socks of ‘wrong’ colours and a Minsk resident who displayed a TV box with white and red colours in the window of their flat. Even if the criminalisation of snowmen, empty boxes, white-red-white socks is ridiculous, the consequences being felt by the citizens of Belarus are horrifyingly real.

The Eurovision Song Contest is one of the world’s largest cultural events with an audience of around 1 billion viewers. A fun event connecting songwriters from Europe and beyond with their fan clubs. Russia historically ranked quite high in the Eurovision. But the 2021 nomination of Tajik singer Manizha by popular vote on Russia’s channel 1 was more than a cause for concern. The feminist migrant woman expressing support for gay rights and singing about women’s empowerment caused quite an outcry in nationalist circles. Tsargrad, an online news outlet owned and run by nationalist oligarch Konstantin Malofeev, compared Eurovision with a worldwide mechanism for the ideological establishment of a colonial order, spreading hatred against Russia and controlled by the US. Is it?

Here is a sample of Manizha’s lyrics:

A TNT channel TV show, Once upon a Time in Russia, was taken off air after the comedians parodied three champions of pro-Kremlin sarcasm: Rossiya 1 TV host Olga Skabeeva, the director of State Media Holding Rossiya Segodnya Dimitry Kiselyov, and TV host Vladimir Solovyov. Clearly, the comedians should have kept poking fun at Greta Thunberg or Navalny, rather than subjecting any of Kremlin’s loyal servants to good-humoured criticism.

Disinformation is not a laughing matter

While at times we may giggle at the absurdity of some of the attempts at disinformation, let us not forget that humour, ridicule or hahaganda are some of the preferred disinformation techniques employed by the Kremlin’s spin doctors. Infoshum, which is flooding the information space with noise and hard-to-believe claims has an aim: to divert from the truth. Next time you come across a funny meme, remember that satire and humour may just as well be used to defame, disinform or belittle.

In 2021, disinformation poisoned not only our democracies, but also influenced our day-to-day decisions, from the food we eat, to the clothes we wear or the vaccines we decide (not) to take. In 2022, let us use the lessons of the past to make the truth so accessible and appealing that it cannot be ignored.

For starters, check out what went wrong with pro-Kremlin disinformation in: