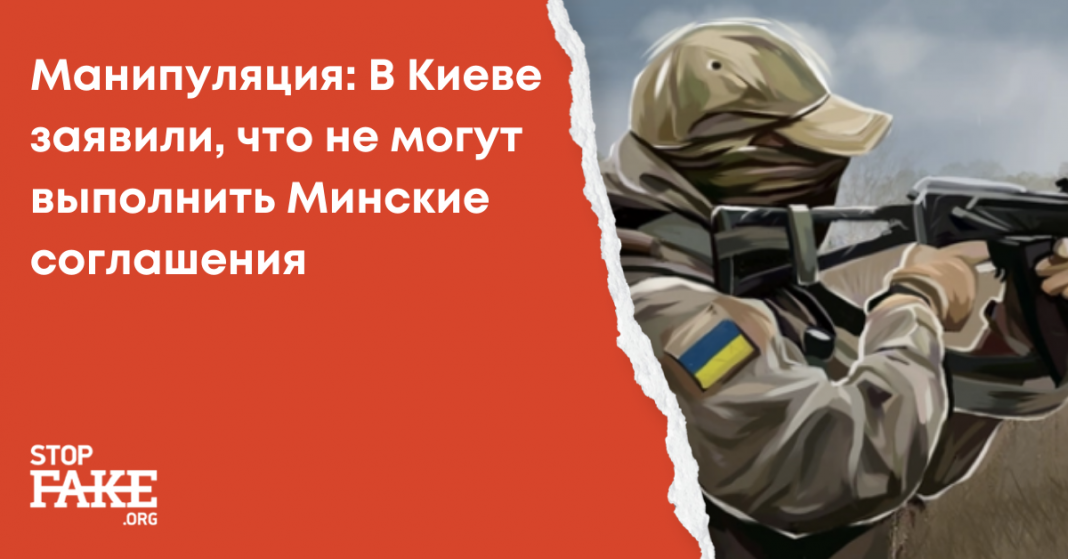 While discussing the Minsk Agreements on national television, Ukraine’s National Security and Defense Council Secretary Oleksiy Danylov explained that Kyiv cannot organize elections on territories controlled by Russian tanks, generals and officers. At the same time Ukraine is not refusing to fulfill those agreements, he said.

Several pro-Kremlin news sites featured stories with headlines claiming that Ukraine cannot fulfill the Minsk Agreements, the protocols signed in 2014 in Minsk under the auspices of the OSCE that intended to end the fighting in Russian occupied Donbas. They allege that such claims were made by Ukraine’s National Security and Defense Council Secretary Oleksiy Danylov.

Russian propaganda incessantly pushes the narrative that Ukraine either refuses or does not intend to comply with the Minsk agreements to support its claim that Ukraine is the aggressor and is not interested in peace in Donbas.

Appearing on a political talk show on the 1+1 Ukrainian television channel Secretary Danylov said the following:

Regarding the Minsk Agreements, I can say that in their current form they are absurd. Please tell me how you conduct elections in a concentration camp? Those occupied territories are under the control of Russia, who appoints the leadership of the Donetsk and Luhansk regions, Russian military officers, Russian generals, and Russian weapons, all this comes from the Russian Federation. Everyone knows that.

Asked what would happen if Ukraine abrogated the Minsk Agreements Danylov said: We are not abrogating them. We have to work with the Minsk Agreements because we have nothing else. But we must understand that we cannot fulfill them as they are. It is nonsense to carry out elections on our Ukrainian territory in the presence of Russian tanks, armed personnel carriers, Russian generals and officers. This is impossible to do. And this must be said openly and publicly. We want the war to end. We want the killing of our young men and women to stop. We are for sitting down and negotiating.

It is clear that Secretary Danylov did not say that Ukraine refuses or does not intend to comply with the Minsk Agreements. He simply spoke about the impossibility of carrying out any free and fair elections in Donbas while Russian tanks and military are occupying the region.