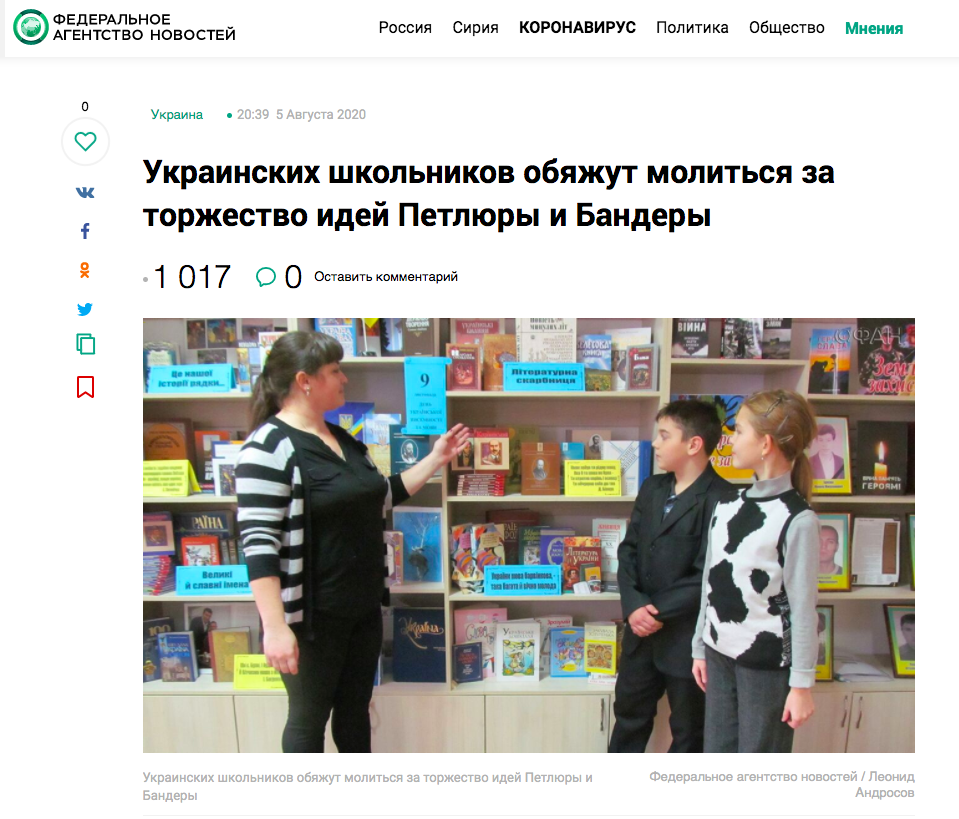 Russian media continue to accuse Ukraine of radical nationalism. In this vein the Kremlin faithful Federal News Agency published a story claiming that Ukrainian children would be forced to pray to two icons of Ukrainian statehood and independence, Symon Petliura and Stepan Bandera and sing the Ukrainian national anthem before each lesson. These claims are a complete distortion of reality but nevertheless Sputnik Novosti and other media outlets faithfully republished this Russian distorted version of Ukrainian school realities.

The publication goes further, claiming that all students would be obliged to sing the Ukrainian national anthem at the start of each school day. It is true that recently the Kyiv City Council recommended singing the national anthem in the capital’s schools, however the council voted in a recommendation and not a legislative act. Similar initiatives have taken place in other Ukrainian cities, Ternopil, Vinnytsia and Chernivtsi, for example, but they have certainly not swept throughout all of Ukraine as Russian media claim.

Furthermore, Ukrainian students are not obliged to pray in schools at all, no laws or resolutions have been enacted to that effect. Most likely the authors of this distorted story simply misrepresented the words of Chernivtsi City Council deputy Oleksander Purshaha, who proposed that students pray at the start of the school day, or twisted the recommendations presented by the Ivano Frankivsk regional council to sing the national anthem and to pray in schools daily.

All of these proposals and motions are merely recommendations, they have been accepted by a few regions but they are not obligatory for all of Ukraine. The historic figures of Symon Petliura and Stepan Bandera don’t figure in any of these recommendations, but that did not deter Russia’s Federal News Agency from using their names as a boogey man for the alleged rabid nationalism being forced on Ukrainian schoolchildren.