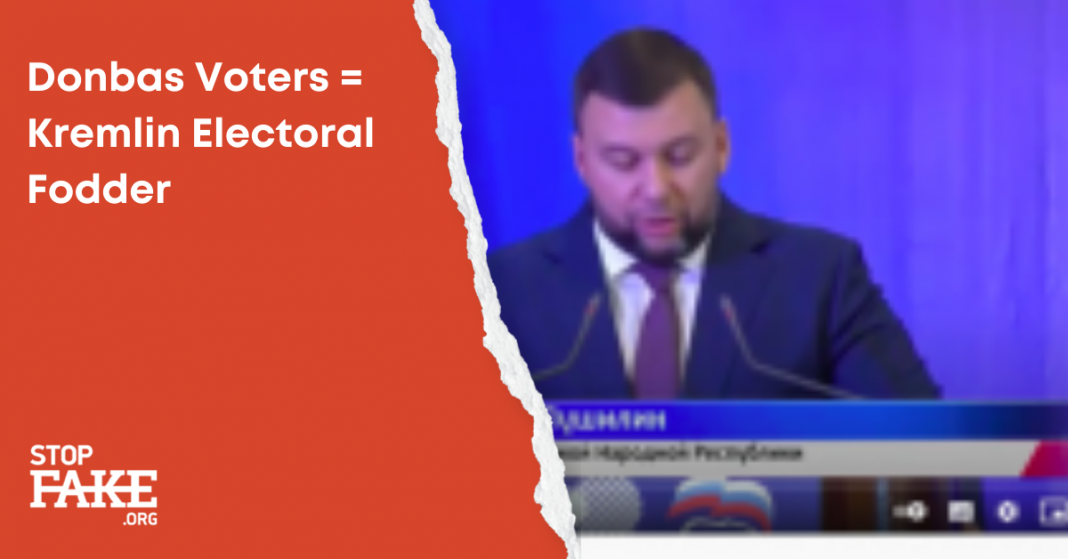 September 8, Donetsk.  A well planned rally of Russian President Vladimir Putin’s United Russia party was underway in the occupied Ukrainian city of Donetsk. After the rally First Republican, one of the separatist enclave’s most popular television channels, spoke to several rally participants. Their message was vintage Kremlin propaganda: Donbas is Russia. Donbas is Russian land. This is a return to the great motherland. We are on the right path, the path of integrating Donbas into Russia. We really want to be a part of Russia. Even the introduction to the story about the rally contains all the right buzz words – greater Russia and integration with Russia.

This rally was held on the eve of Russian Federation State Duma elections which are taking place September 17-19.

The hosts of the rally were the leader of the self-proclaimed Donetsk People’s Republic (DPR) Denys Pushilin and Andriy Turchak, United Russia General Council chairman. “We are electing the government in our country, along with all of its citizens, from the Black to the White Sea, from the Kurill Islands to Kaliningrad,” declared Pushilin, most likely forgetting that the separatist enclave is not a subject of the Russian Federation. Andriy Turchak in turn called for a collective safeguarding of the “Russian world on this earth” and announced that there are nearly 4,000 United Russia members in occupied Donbas.

For the first time, since Russian supported separatists seized eastern Ukrainian regional centers and launched a war with the Ukrainian state, the self-proclaimed Donetsk and Luhansk People’s Republics will take part in Russian parliamentary elections, viewing such participation as an “act of union” and the beginning of full-scale integration into Russia’s socio-political processes. Viktor Vodolatsky, First Deputy Chairman of the State Duma Committee on Confederacy of Independent States (CIS) Affairs, Eurasian Integration and Relations with Compatriots, even announced that the proposals of Donbas residents were taken into account during the formation of the United Russia party program.

During a recent visit to Donetsk, Anatoliy Bibilov, the president of another self-proclaimed people’s republic – South Ossetia emphasized that the union of the Donetsk and Luhansk People’s Republics with Russia is an inevitable process which has already gained momentum and he reminded everyone, lest they forget, that Russia is the guarantor of security for many countries. Perhaps through his rousing speech he intended the residents of occupied Donetsk and Luhansk to suddenly envy the ‘achievements’ of South Ossetia, a region that has been completely under Russian control for the last 13 years.

United Russia clearly wants to bank some dividends from occupied Donbas. According to Ukraine’s National Security and Defense Council, Russia distributed 630,000 Russian passports to residents of Ukraine’s occupied territories. As stated by Russia’s Central Election Commission, as of July 1, 2021 Russia numbered 108 million voters. Deutsche Welle reports that with an expected 50% voter turnout, the current 27% support commanded by United Russia will rise to 40%. For the Kremlin the 630,000 newly baked Russian voters from occupied Donbas are a potential 3% increase in the electoral share currently held by Russia’s ruling party.

According to the First Republican television channel, United Russia opened 255 remote electronic voting information centers in the DPR and an additional 141 centers in the self-proclaimed Luhansk People’s Republic (LPR). Russia’s Central Election Committee introduced such voting centers in seven of its regions. Taking into account the number of people from these pseudo-republics who have chosen to take Russian passports, there are 1,500 people per one voting center, a voting density on par with regular polling stations. Russian passport holders from occupied Donetsk and Luhansk regions who choose to vote in this year’s Duma elections will have their votes counted in the southern Russian Rostov region.

The Kommersant newspaper cites Russia’s Central Election Committee which announced on September 13 that the Rostov region is the second Russian region in terms of the number of people willing to vote through the new electronic centers. However the Rostov Region Club, part of a federation wide network of political analysts and experts disagrees with the Central Election Committee’s optimistic outlook and says that the only people using the new remote voting system will be those who live in the DPR and LPR, Ukraine’s occupied territories, others are simply not interested. In fact only some 290,000 occupied Donbas residents have registered for online voting.

Russia’s Interfax news agency reports that Russia has organized 825 free buses and 12 trains to transport occupied Donbas residents who want to vote but wish to cast a paper ballot to Rostov area polling stations from several cities, Yasynuvate, Makiivka, Amvrosivla, Khartsyzk, Zuhres and Ilovaysk. The free voting trip also will also include a free visit to a military glory memorial.

The electoral agitation that the ruling Kremlin party has unleashed in occupied Donbas is unprecedented, with endless convoy of humanitarian and educational visits from the party, gifts of computers, interactive advertisements, sports equipment and much more. While visiting a school to stir up the vote United Russia General Council chairman Turchak declared that Russia and United Russia is, has always been, and always will be with the self-proclaimed separatist republics and is always ready to come and help.

United Russia has global visions for the separatist enclaves as well. State Duma deputy Andrei Kozenko announced that the Russian government wants to give the entire Donbas region the opportunity for official registration, which would equate Donbas residents with Russian citizens in terms of receiving state and social services. Without official registration, the infamous Soviet era propiska, DPR and LNR Russian citizens do not have access to state pensions, health insurance, maternal subsidies, etc. Another Duma MP, Dmitri Sablin declared that in the future, the separatist republics would become single mandate constituencies in a further reunification experiment with Russia.

Local separatist television stations are going all in for election fever. During a September 10 TK Union news program, almost the entire episode was dedicated explaining the United Russia political platform. DPR legislator Maksym Knysh appearing on the First Republican separatist channel declared that “as of now, all of us have already received Russian citizenship. And for us, residents of the DPR, this is a huge plus”. Paradoxically, at the same time other participants on the show complain that Ukraine is being managed from the outside by remote control.  Others openly and unabashedly campaign for United Russia, as did school director Andriy Sereda.

A fair amount of television programming is devoted to explaining how the remote electronic voting centers actually work. Natalia Fesiuk, deputy chairwoman of one of Donetsk’s city districts explains that each polling station is equipped with a laptop, that can be picked up and carried anywhere, should a potential voter not want to enter the building where the electronic voting center is located.  In another story from the electronic voting info center, a journalist explains the procedure of obtaining permission to participate in the elections: one must provide one’s email password in order to receive a code that must be provided to voting center workers in order to receive a voting registration permission form. A voting center volunteer called Mykyta admits that among other things, he helps people vote. All such hoopla simply shows that despite presents, television shows and lots of bells and whistles, voters, if they do turn out, have a limited understanding of how these elections are really going to function.

Separatist television programs also actively call on people to take Russian passports. In an August 13 TASS interview Russian Foreign Minister Sergei Lavrov declared that Russia was not violating any international laws by giving out Russian passports to occupied Donbas residents. It is becoming increasingly clear that the Russian parliamentary election is a political event that will continue to encourage the leadership of the separatist republics to forcibly issue Russian passports to the region’s population. Presently, new Russian citizens from Donbas are getting passports with a Pskov oblast code and without official registration. These passports are issued in special passport offices in the Rostov region and they are not recognized in Ukraine.