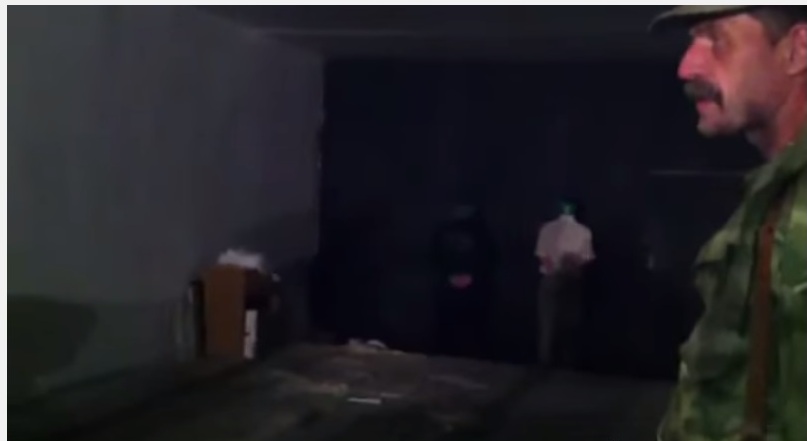 June 5 a video showing how the leader of Horlivka terrorists Colonel of the Russian Main Intelligence Directorate Igor Bezler (aka Bes, eng. – Imp), wanted by the Security Service of Ukraine, gives an order to execute by shooting two Ukrainian hostages.

On the video Bezler tells that he has six captives and he wanted to change them for his man, but Ukrainian side refused. “I waited three days, but I have no time to wait any more. Mister Budik and mister Vasiushchenko will be shot now. I am saying for mister Turchinov, Parubiy and others of that ilk: if my man is not released in an hour, the next two captives will be shot, in an hour and a half – next two. Untill eight officers will be shot. If Ukrainian army and state do not need these officers, I do not need them even less so”, he says in this message.

After these words Bes commands to shoot, a man offscreen executes the order, then two men falls down.

This video was widely spread around Russian and Ukrainian media.

Many people, who turned their attention to the moment of falling of allegedly executed men, doubted the genuineness of the execution. Firstly, trajectory of falling of these men was strange. Secondly, the absence of blood after the shot can’t be explained.

These doubts were proved on June 10. Ukrainian journalists of 1+1 TV channel managed to talk to one of the hostages – Vasyl Budik. Budik admitted that he had voluntarily agreed to act in this video. “After the change had been cancelled, in order to stir up Ukrainian community it was proposed, owing to a nervous condition, to stage our execution. It was shown how, in principle, our lives could be ended”. Budik specified that terrorists had wanted to change them for one militant – Olha Ivanovna.