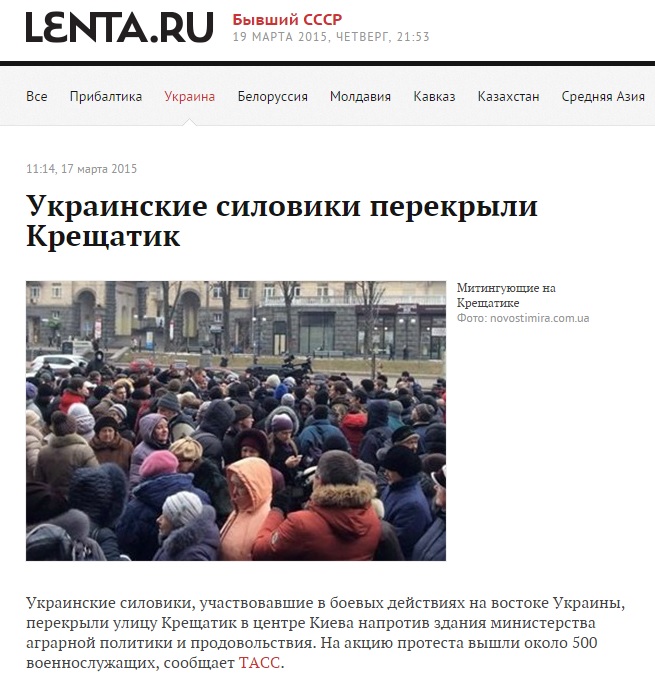 On March 17, the Russian news agency TASS misleadingly reported that “about 500 participants of military operations in the southeast of Ukraine blocked Khreschatyk Street in Kiev on Tuesday (opposite to the building of the Ministry of Agrarian Policy and Food).” According to a TASS correspondent who was reporting from the scene, the protesters were demanding that land be allocated to them.

This information was picked up and carried by other Russian media, such as: Lenta.ru, NTV and others.

However, the events in Kiev that day developed according to a different scenario.

First, only about a hundred people were involved in the rally on Khreschatyk. Former employees of the state enterprise Puscha-Voditsa picketed the Ministry of Agrarian Policy and Food, demanding that the organization’s lands be allotted to them. Information about the rally can be found on the site of the Ukrinform news agency.

Second, two rallies actually took place, as reported by Dialog.ua. The first one consisted of the current and former employees of Puscha-Voditsa. The second was held by about 50 people in military uniform demanding the allocation of land for those fighting in eastern Ukraine.

The participants of the Puscha-Voditsa rally accused the men in uniform of attempting to neutralize their activity, calling them “thugs for hire” and provocateurs.

Third, Khreschatyk Street was blocked for less than for five minutes that day.