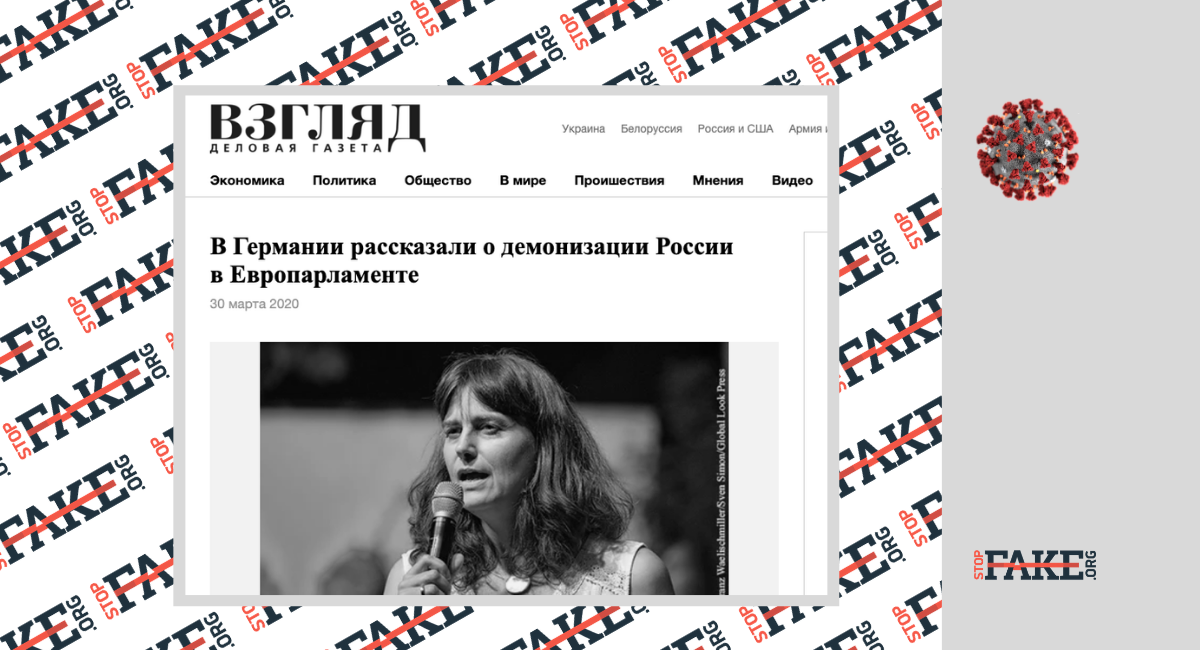 Reacting to EU and US accusations that Moscow had launched a large scale disinformation campaign about the COVID-19 pandemic Russian media accused the West of Russophobia and of wanting to hide their mistakes and inaction in the face of the coronavirus while Russia is “in the forefront of the fight against the spread of the infection”. While people are dying in many countries and economies are on the brink of disaster, it makes sense to learn from those countries who know how to handle a crisis. And the countries that know how to handle a crisis are none other  than Russia and China, the Kremlin faithful business publication Vzglyad claims, while News.ru announces that that EU and US statements about Russia’s coronavirus disinformation campaign are politically motivated.

This latest wave of Russian stories about alleged Russophobia and Western anti-Russian rhetoric in the European Union surfaced after EU European External Relations Service (EEAS) published a special report on COVID-19 disinformation which describes how Russia is working to destabilize the situation resulting from the global coronavirus pandemic. Having analyzed dozens of leading Russian news items since the spread of the virus, EEAS analysts identified the main directions of Russian propaganda. Among them were widespread fakes and conspiracy theories claiming the coronavirus is actually an American biological weapon aimed at Russia or China, that the EU and the US, unlike Russia, simply can’t cope with the magnitude of the virus, that the virus was caused by immigrants who continue to spread the it throughout the EU.

Meanwhile European Commission spokesperson Peter Stano announced that the EU was recording extensive waves of disinformation, a significant amount of which is coming out of Russia. “Since the onset of COVID-19 we have noticde that levels of disinformation, open lies and untruth have grown. The European External Relations Service has its own department whose job is to monitor and analyze this propaganda and disinformation coming from outside the EU, including from Russia, providers located in Russia or connected to pro-Kremlin forces in some way” Stano told reporters during a briefing.

The fact of this targeted Russian disinformation campaign is easily confirmed, one need only watch a Russian television newscast which is filled with conspiracy stories and tales extolling Russian heroism in Italy and the medical supplies that Russia sent to Italy “with love”, despite the fact that Italy said 80% of the supplies were useless and the doctors that Russia sent to Italy were in fact Russian military.

The World Health Organization has also said that disinformation is a threat and false claims about the coronavirus are spreading faster than the virus itself and are just as dangerous. The WHO even came up with a term for this disinformation phenomenon – infodemic.

Not only are the EU, NATO and the World Health Organization noting that Russia, China and Iran are spreading disinformation, the United States have said as much as well. At the end of March Russia and Iran began promoting a new narrative that Western sanctions have allegedly contributed to the spread of the coronavirus. Over the last six years the US has imposed more than 75 various sanctions against Russian citizens and companies involved in aggression against Ukraine, these sanctions, just like the Iran sanctions, however have absolutely nothing to do with the spread of coronavirus.

In a statement released on March 23 US Secretary of State Mike Pompeo said that such fabrications from Kremlin and Iran bots endangered people around the world and noted that US sanctions are not aimed at food, medicine or other humanitarian imports.

Kremlin bots and trolls promoting fake pandemics have also been identified in Ukraine. Over two weeks of quarantine isolation Ukraine’s Security Service IT specialists identified 79 people who were disseminating disinformation about the coronavirus on social media. 28 people were charged, the distribution of fake content was blocked in more than a thousand online communities of more than 500,000 subscribers.