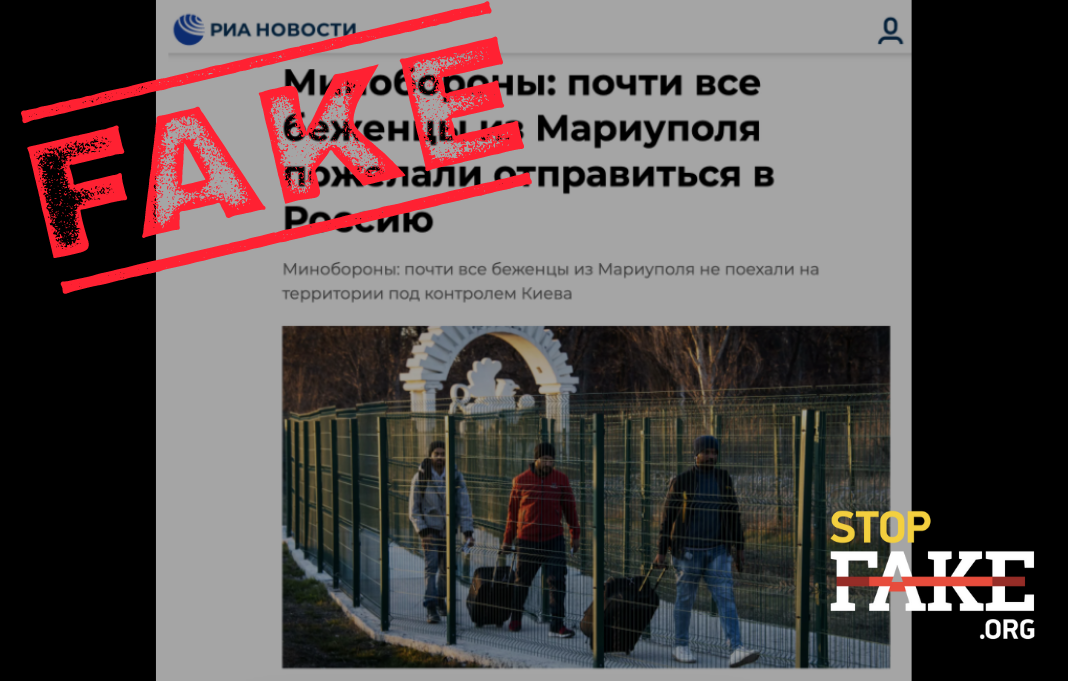 The majority of refugees from Mariupol who are fleeing the brutal Russian bombardment of their city, are leaving for Ukrainian cities that are controlled by Ukrainian authorities.

On March 16, citing the Russian Defense Ministry, several Russian media – RIA Novosti, TASS and others – featured stories claiming that the majority of refugees from Mariupol who were leaving the city through established humanitarian corridors, wanted to go to Russia.

“Almost 31.4 thousand civilians were evacuated from Mariupol by humanitarian corridors, 99% of them expresses a desire to go to Russia or territories controlled by Russia” TASS reported, citing the head of the Russian National Defense Management Center General Mikhail Mizintsev.

These claims are simply not true. Mariupol has been under constant fire from aircraft and artillery, it was finally possible to evacuate civilians in an organized manner only on March 14, 2022. According to the Mariupol City Council, more than 160 private cars were able to leave the city on the Portovske-Manhush-Berdyansk-Tokmak route, with Zaporizhzhia being the final destination. Zaporizhzhia is under the control of the Ukrainian government.

According to Ukraine’s Ministry of Reintegration and Temporarily Occupied Territories, the following day, March 15, 2022 about 20,000 people were evacuated through an organized humanitarian corridor with Zaporizhzhia as their destination. The following day, March 16, the Zaporizhzhia City Council announced the arrival of 1,565 cars and 4,329 people from Mariupol. Many of the evacuees were forced to spend the night in Berdyansk, continuing their journey to Zaporizhzhia the following day. According to Ukrainian authorities, as of the evening of March 16, 6,426 Mariupol residents had arrived at their final evacuation point, and a convoy of buses was still traveling towards Zaporizhzhia.

According to the United Nations’ International Organization for Migration, since the start of the war on February 24 through March 16, 2022, 3,169.897 people have been forced to leave Ukraine. Only 168,858 of them (almost 5%) chose to go to Russia.