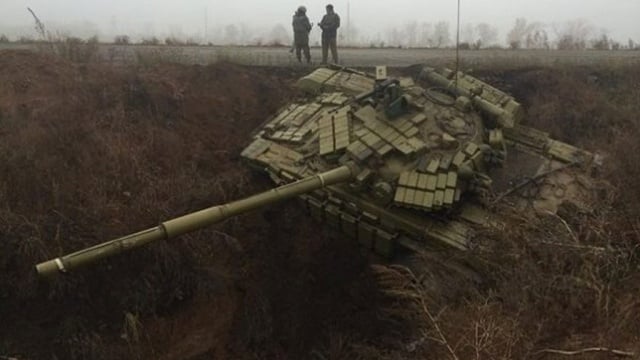 A photo of a Ukrainian tank, which went down in a ditch, is being actively spread through social networks.  As networkers explain, this photo was allegedly made on the Ukrainian-Russian border.  That is why they think that this tank, which is mentioned by them as a tank of the National Guard of Ukraine, went down in so-called anti-Russian ditch.  Its creation was recently announced by the Prime Minister of Ukraine Arseniy Yatseniuk.  But this is a false statement.

The photo became so popular, that several Russian Internet mass media wrote about it.  Among them: Pravda.ru (the photo was changed here), the website of TV channel NTV.

In fact the photo shows a tank of the 28th Brigade of the Armed Forces of Ukraine near the small town of Peski, in the area of the Donetsk airport that is far from the border.  The photo is made by the Ukrainian journalist Roman Bochkala.