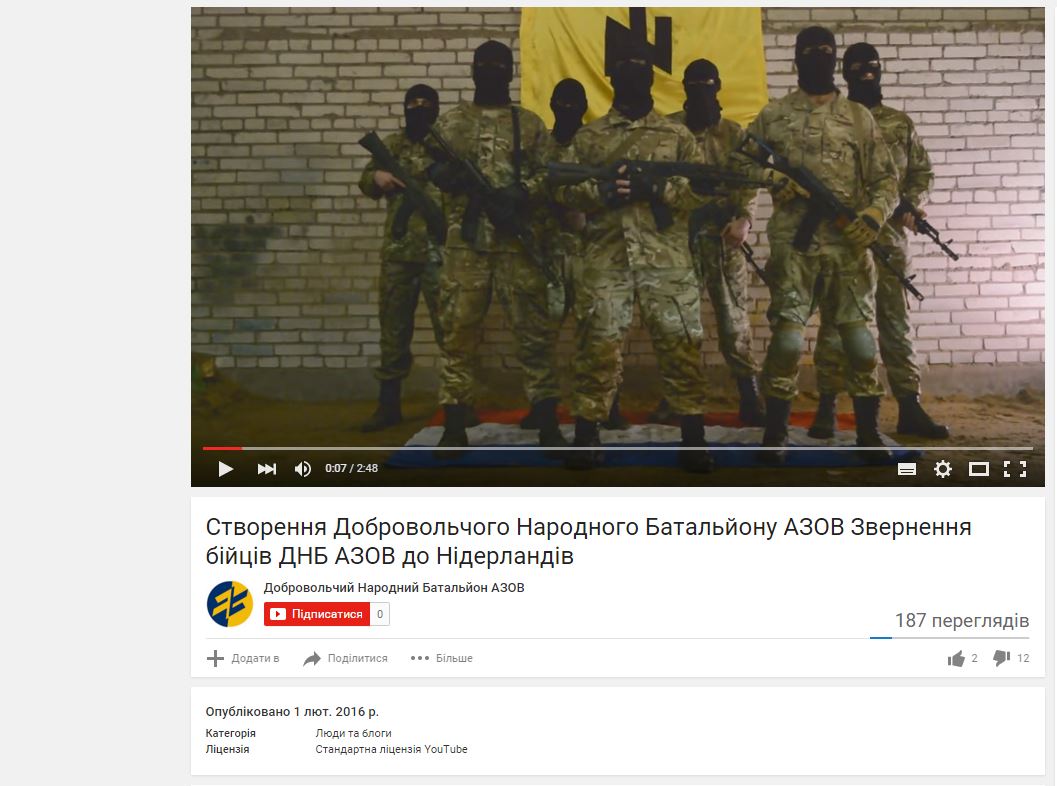 Another sinister video has appeared on a YouTube channel which purports to be the work of Ukraine’s controversial Azov Battalion.

Last month a video appeared in Russian media in which Azov members were apparently threatening to exact retribution if Dutch people voted “no” in the scheduled April referendum about whether the Dutch Government should support the European Union-Ukraine association agreement.

The real Azov Battalion immediately posted a rebuttal calling the threats against the Netherlands a fake.

Now a YouTube channel has cropped up calling itself “Azov Volunteer People’s Battalion” which features a new video in which apparent Azov battalion members, dressed in camouflage uniforms, their faces hidden by balaclavas and clutching machine guns, tread on a large Dutch flag as a voice claims that the first video threatening the Netherlands is genuine. Responding to StopFake’s inquiry Azov member Stanislav Krasnov called the latest video “a very cheap fake and there’s no sense in commenting on this”. The Azov Volunteer People’s Battalion YouTube channel was registered very recently and contains only this new fake video.

The Azov battalion also demonstrated how easy it is to create a fake in less than 20 minutes. All you need is 5-6 men in identical or similar uniforms, some guns, a flag and you’re good to go, says an Azov fighter as he presents masked men purporting to be Novorossia fighters complaining about not being paid in months. “If you don’t pay us, we’ll ditch this fight and go pick strawberries in Poland” says one of them.

The Azov video caption asks Ukrainian and world media to ignore fake videos aimed to discredit Ukrainian volunteer battalions and not to fall for “cheap provocations”.