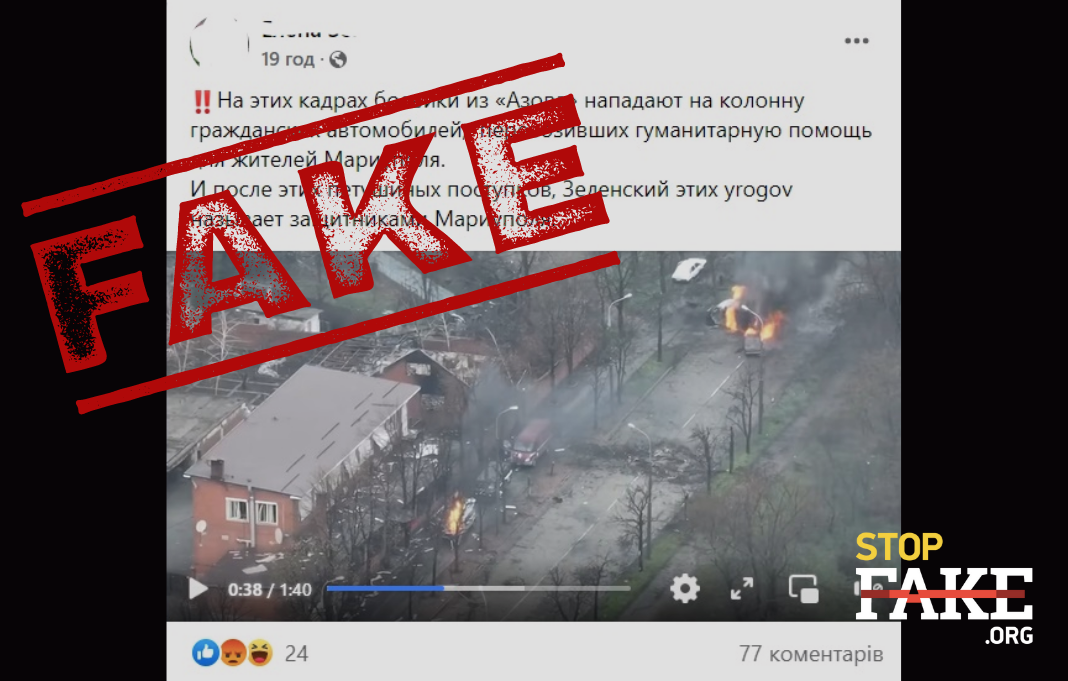 The video which allegedly shows an attack on a humanitarian convoy, in fact shows an attack on the Russian military. This is clear from the distinguishing letter “Z” painted on vehicles, soldiers in Russian camouflage and the weapons they carry.

A video is being disseminated on the web allegedly showing the Azov regiment attacking a civilian vehicle convoy carrying humanitarian aid in Mariupol.

“There were no tanks or armored personnel carriers, these monsters saw what they were attacking. This horrific footage of this Nazi massacre is proof of these Nazi fiends’ crimes” anonymous pro-Russian Telegram channels write.

This video blaming Azov for attacking a humanitarian convoy was also published on Telegram channels that position themselves as pro-Ukrainian, in particular the Sheptun channel. According to the Ukrainian Security Service, Sheptun moderators are employees of Russian security services.

The video in question was first published on the Azov regiment’s official social media accounts with the caption “Azov Regiment Counterattack.” The video was indeed shot in Mariupol, as is indicated in the Regiment’s Telegram channel. The original video has the Azov marking on the lower right-hand corner and links to the regiment’s website and Telegram channel. This information was deliberately removed from the distributed videos.

Claims that the Azov Regiment attacked a humanitarian convoy are baseless and patently untrue. This is confirmed by the video footage itself, which clearly shows that Russian military were moving in civilian vehicles.

At 00:06 seconds on the video we see a row of vehicles, we can distinguish several cars, one truck and a minivan. However, at 1:00 minute, one can see that the vehicles do not have any markings that would identify them as a humanitarian convoy, but they do have the letter “Z” on them, the letter which is the hallmark of the Russian military and their subordinate Donetsk and Luhansk People’s Republics militants. There are scores of photos on the web showing Russian military using cars in their operations against Ukraine.

According to the Geneva Convention, to which Russia is also a signatory, identification marks for the protection of medical units, emergency medical vehicles, medical and religious personnel, equipment or suppliers are a red emblem in the form of a cross, a crescent, or a lion and the sun on a white background (Appendix 1). The Convention also states that the identification emblem should be as large as needed under given circumstances.

The video also shows at 00:57 that the people in the vehicles are wearing military uniforms, they are in camouflage, they also have the distinctive white bandages/tapes on the right leg and left sleeve, markings that the Russian army has used throughout their war in Ukraine. Also at 1:29 one of the soldiers can be seen holding a weapon.

StopFake has debunked many Russian fakes about the Azov Regiment, one of the latest claimed that Azov shelled civilian boats in Mariupol.