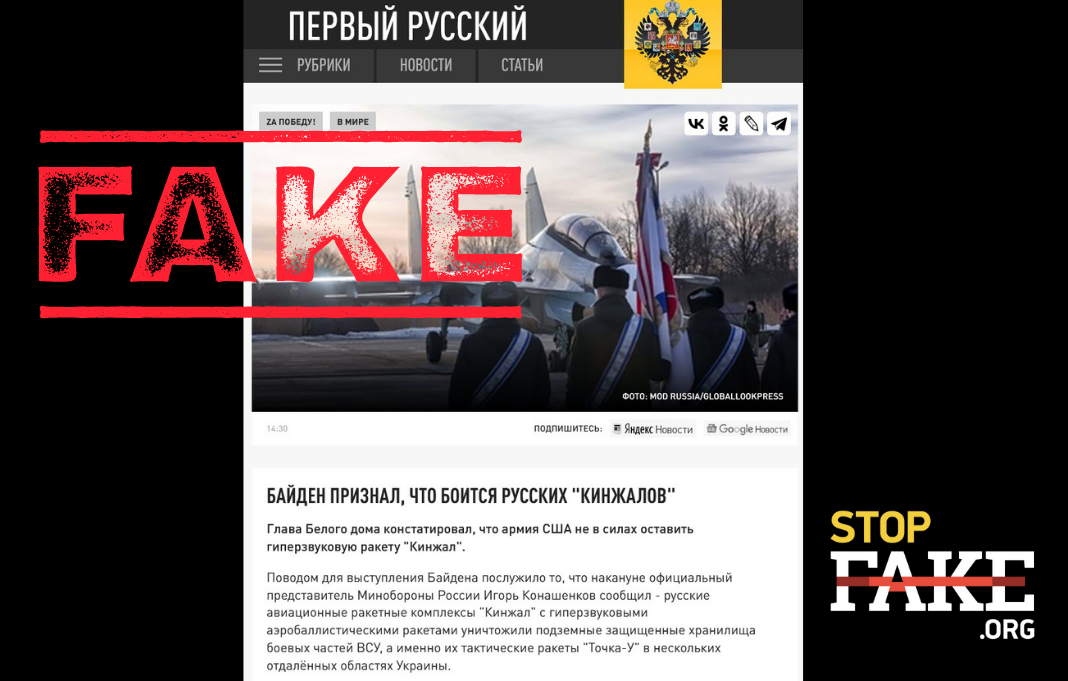 US President Joe Biden said that the use of Kinzhal missile is a sign that “Putin is backed against the wall” because of the lack of success by the Russian army in Ukraine. He also stressed that these missiles do not differ that much from other launched missiles, except that they are difficult to shoot down with air defense systems.

Russian media are disseminating stories claiming that US President Joe Biden allegedly admitted that he is “afraid” of Russian hypersonic Kinzhal missiles. “White House chief admits that the US Army is unable to stop the Kinzhal hypersonic missile” writes Tsargrad.

President Biden never said that he was “afraid” of Russian hypersonic missiles. Quite the contrary, he called the use of these weapons in Ukraine a sign that “Putin is backed against the wall” because the Russian army is not achieving the success he expected in Ukraine and he is now pursuing more aggressive tactics. Biden also emphasized that these missiles are not fundamentally different from those already known, except that they are difficult to shoot down with air defense systems. “And, if you notice, they’ve just launched a — their hypersonic missile, because it’s the only thing that they can get through with absolute certainty.  It’s — as you all know, it’s a consequential weapon.  And — but — with the same warhead on it as a — as any other launched missile.  It doesn’t make that much difference, except it’s almost impossible to stop it.  There’s a reason they’re using it” President Biden said.

According to The Insider global news publication, the missile Russia fired at Ukraine is simply a modified version of an air-launched ballistic missile. The Kinzhal missile travels at hypersonic speed, but it does not belong to the advanced class of weapons. “The truth is, the Kh-47M2 Kinzhal hypersonic missile is actually little more than a conventional air-launched ballistic missile with a design that dates back to the 1980s…  Hypersonic speed isn’t actually all that special, but there are new weapons that leverage hypersonic speeds to achieve objectives in new or different ways. The Kinzhal, however, just isn’t one of them” writes military analyst Alex Hollings. According to Hollings, the Kinzhal is a modified version of the 9K720 Iskander short range ballistic missile with a new guidance system designed specifically for air-to-ground operations. This Russian missile, like others, operates using a conventional rocket propulsion system and a suppressed ballistic flight path.

Hollings says the Kinzhal missile is more of a marketing gimmick than next-generation technology, because Russia simply cannot afford to mass-produce modern aircraft such as the Su-57 fighters or tanks such as the T-14 Armata without foreign investments. To attract foreign buyers Russian must project an image of a country that is able to develop weapons that are equal to or better than those of such powerful countries as the United States and China.

Moreover, as Tom Karako, a defense expert and senior fellow at the Center for Strategic and International Studies  who directs the center’s International Security program explained to the Washington Post, although the Kinzhal is harder to shoot down with air defenses, however, “it’s a huge delusion to think that these things cannot be defeated, after all, they are just rockets” Karako said.

Belgian defense strategy analyst Joseph Henrotin also noted on Twitter that Russia may be running out of Iskander short range ballistic missiles or looking to up the ante by deploying a nuclear capable hypersonic missile. The respected Russian military expert Pavel Felgenhauer also emphasized that use of the Kinzhal missile would not change much on the territory of Ukraine, except to have a psychological and propaganda effect. Felgenhauer also thinks the use of this missile may indicate that Russian troops are running out of other types of weapons.

In view of this, the British Defense Ministry stated that the use of the Kinzhal is unlikely to significantly affect the outcome of Russia’s invasion of Ukraine.