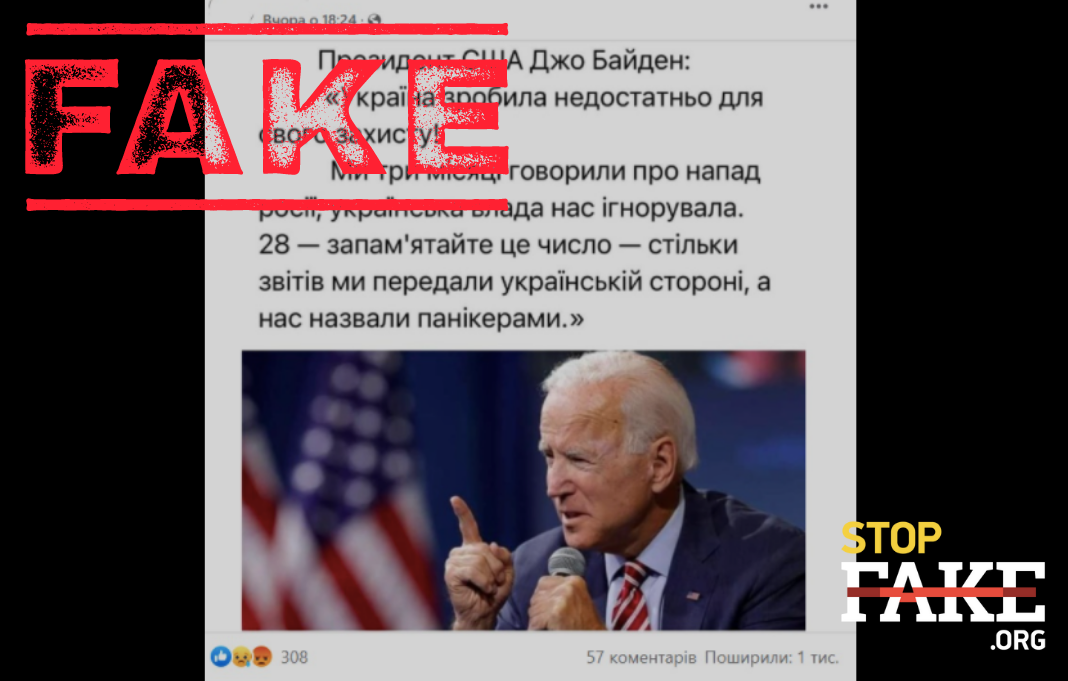 Netizens are massively disseminating alleged statements by US President Joe Biden criticizing the Ukrainian government. “Ukraine has not done enough to protect itself! We talked about Russian attacking for three months and the Ukrainian authorities ignored us. 28 – remember this number – that’s how many reports we handed over to the Ukrainian side, and they called us alarmists” they quote the American President.

Posts with Biden’s “quote” began appearing on the morning of March 26. The first Facebook publication of the quote links to a Twitter account KyivMiskBudda. At the moment that tweet is no longer on that Twitter feed, but it is still in cache. The tweet begins with the words “If Biden were Zelensky”.

Some social media accounts circulated this text, claiming it was a real quote from a speech that President Biden gave in Warsaw on Saturday, March 26.

President Biden however, did not say these words, not during his Warsaw speech, nor during any of his other public appearances. StopFake analyzed his public speeches as well as transcripts of meetings with media for the period of Februarty 24 through March 26, 2022. We did not find this criticism or any similar criticisms to have been uttered by the American President regarding the Ukrainian government.

On the contrary, an analysis of Biden’s speeches shows that the statements circulated on the Internet contradict the position of the White House and what the US President has actually said. We have selected a few quotes from Joe Biden on Ukraine’s defensive capabilities and the actions of the country’s government.

From President Zelenskyy to every Ukrainian, their fearlessness, their courage, their determination, inspires the world. Groups of citizens blocking tanks with their bodies. Everyone from students to retirees teachers turned soldiers defending their homeland. (State of the Union Address, March 1, 2022)

I spent countless hours unifying our European allies. We shared with the world in advance what we knew Putin was planning and precisely how he would try to falsely justify his aggression.  (State of the Union Address, March 1, 2022)

I’ve just spoken for some time with President Zelenskyy of Ukraine. I told him, as I have each and every time we’ve spoken, the United States stands with the people of Ukraine and their bravely — as they bravely fight to defend their country.  And they are doing that.  (Remarks by President Biden Announcing Actions to Continue to Hold Russia Accountable, 11.03.2022).

We’ve already committed more than 1 billion 200 million dollars in security assistance to the people of Ukraine just over the past year. (Remarks by President Biden at Signing of H.R. 2471, “Consolidated Appropriations Act, 2022)

But because our response — because our response is working, because the Ukrainians are fighting so valiantly and using the equipment we’ve given them — and the United States alone has committed over $2 billion to NATO.  The idea that they don’t have enough sophisticated equipment is just simply not accurate.  And I’m not going to take the time to go into all of the detail here, but the point is: They have every — every equipment — every piece of equipment that makes rational sense, based on our military and NATO’s military, for them to be able to do what they’re doing.  And they’re wreaking havoc on the — on the Russian military, whether it’s their tanks or their helicopters or their aircraft. (Remarks by President Biden Before Business Roundtable’s CEO Quarterly Meeting, 21.03.2022).

You’re going to see — you’re going to see women, young people standing — standing the middle of — in front of a damn tank, just saying, “I’m not leaving.  I’m holding my ground.”  They’re incredible.  But they take a lot of inspiration from us. (Remarks by President Biden During Visit with Service Members of the 82nd Airborne Division, 25.03.2022).

I know not all of you believed me and us when we kept saying, “They are going to cross the border.  They are going to attack.” Repeatedly, he asserted, “We have no interest in war.”  Guaranteed he would not move. Repeatedly saying he would not invade Ukraine. Repeatedly saying Russian troops along the border were there for “training” — all 180,000 of them. (Remarks by President Biden on the United Efforts of the Free World to Support the People of Ukraine, 26.03.2022).

In the years before the invasion, we, America, had sent over $650 million, before they crossed the border, in weapons to Ukraine, including anti-air and anti-armor equipment. Since the invasion, America has committed another $1.35 billion in weapons and ammunition. And thanks to the courage and bravery of the Ukrainian people — (applause) — the equipment we’ve sent and our colleagues have sent have been used to devastating effect to defend Ukrainian land and airspace.  Our Allies and partners have stepped up as well. (Remarks by President Biden on the United Efforts of the Free World to Support the People of Ukraine, 26.03.2022).

But he, Putin, thought Ukrainians would roll over and not fight.  Not much of a student of history.  Instead, Russian forces have met their match with brave and stiff Ukrainian resistance. Rather than breaking Ukrainian resolve, Russia’s brutal tactics have strengthened the resolve. (Remarks by President Biden on the United Efforts of the Free World to Support the People of Ukraine, 26.03.2022).

On March 10 Oleksiy Danilov, the Secretary of Ukraine’s National Security and Defense Council stated that Ukraine knew and was preparing for a possible Russian invasion of Ukraine. Ukraine was preparing for a full-scale-war with Russia but could not openly communicate this to the public. “We could not tell society that tomorrow there will be war. This was unacceptable, because this was one of the Russian Federation’s tactics, so that chaos would begin here. We held on to the very last, we prepared until the very last. We clearly understood that this would happen.” Danilov said.