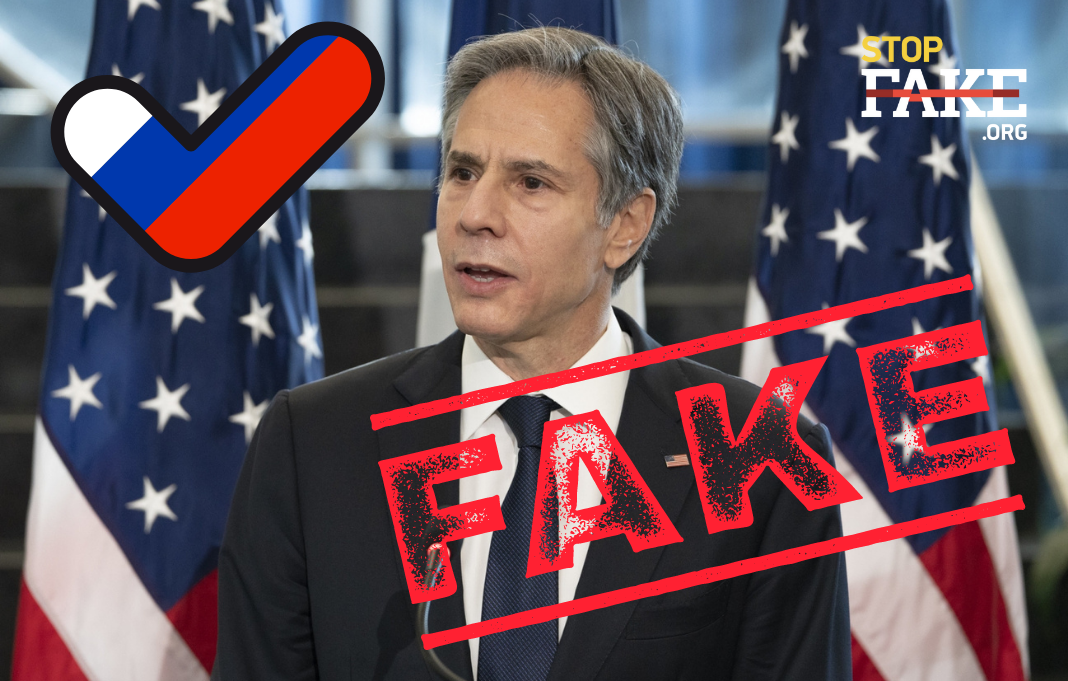 US Secretary of State Anthony Blinken said that despite the large number of Russian troops, the Ukrainian Armed Forces continue to successfully repel the aggressors and expressed “absolute confidence” in Ukraine’s victory.

Russian media have resorted to a classic method of creating fake news, taking the words of the American Secretary of State Anthony Blinken out of context. The Izvestia newspaper published a cursory quote from Blinken, in which he spoke about the size of the invading Russian army – the Russian propaganda machine took this as a compliment and immediately announced that Blinken felt “confident” in Russia’s victory over Ukraine.

“During a working visit to Vilnius, the head of the US State Department said that with all due respect to what the Ukrainian army is doing today, it has no chance of success” writes the First Sevastopol channel web site, passing this as Blinken’s opinion.

Russian propagandists continue to invent non-existent successes of their army and to spin those inventions into disinformation. The fake story about Secretary Blinken’s “confidence” in the “invincibility” of the Russian army appeared after the Secretary’s visit to Lithuania on March 7. Blinken’s quote was taken out of context from a lengthy statement at a joint press conference with Lithuanian Foreign Minister Gabrielius Landsbergis. A Lithuanian National Television journalist asked Blinken whether a Third World War was possible in connection with Russia’s aggression against Ukraine and the civilized world.

Asked whether NATO should be concerned that Putin would attack a member country, Blinken responded that in such an event the US would take action to defend every inch of NATO territory. Blinken also reiterated that Russia is already paying an unprecedently high price for its aggression against Ukraine. He noted the incredible effectiveness of Ukrainians in countering Russian aggression, despite the huge number of Russian troops. It was in this context that he spoke about the disproportionate number of Russian troops.

“Russia has a hugely disproportionate force compared to what Ukraine has.  It has the ability to continue to grind down the Ukrainian military and, of course, to take horrific actions against the Ukrainian people, including attacking civilians… But as I said yesterday, even if and as Russia might win a battle in Ukraine, that doesn’t mean it’s winning the war.  If and as Russia might take a city in Ukraine, that doesn’t mean that it’s taking the hearts and minds of the Ukrainian people.  It can’t; it won’t.  And whether it’s a week, whether it’s a month, whether it’s longer, I am utterly convinced that Ukraine will prevail,” Blinken emphasized.

This is not the first time that the US Secretary of State has expressed confidence in Ukraine’s imminent victory in this war. A day earlier, in a March 6 interview with CNN Blinken said that Russia was doomed to failure in Ukraine: “…He is destined to lose.  The Ukrainian people have demonstrated that they will not allow themselves to be subjugated to Vladimir Putin or to Russia’s rule” Secretary Blinken underscored.