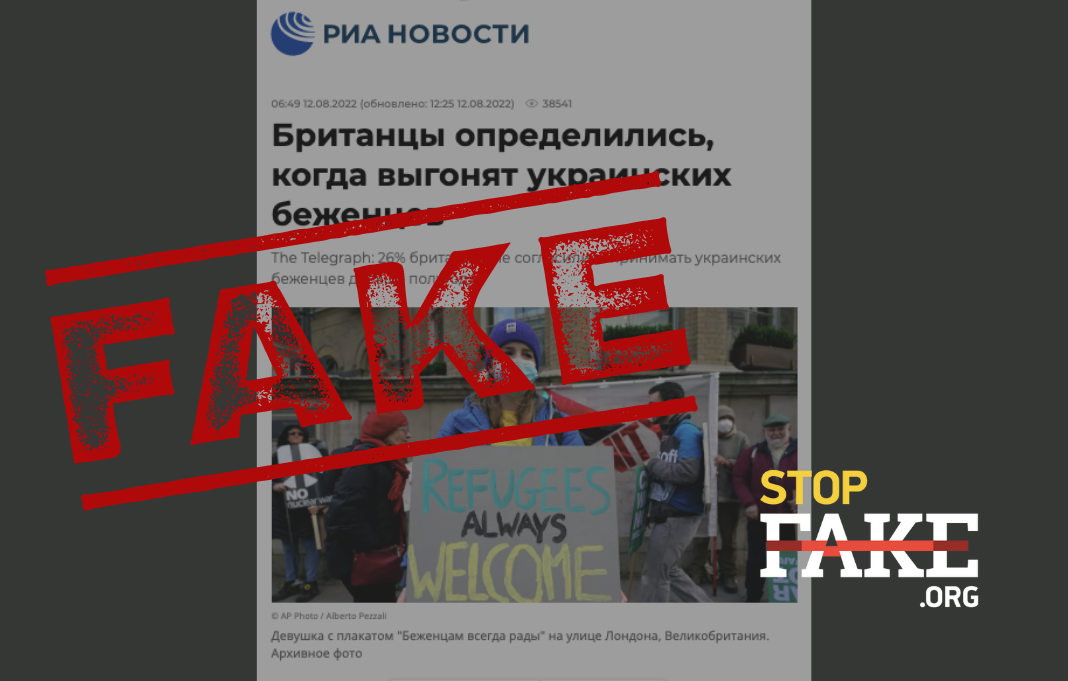 Russian propagandist media are making false claims about British attitudes to Ukrainian refugees based on a poll conducted by the British Office of National Statistics. The Homes for Ukraine program conducted a survey to assess how long current sponsors wanted the hosting arrangement with Ukrainian refugees to last. 24% of respondents said they were ready to help with housing for more than six months, but not for longer than a year. 23% said they were ready to help for longer than a year. There was no mention of any expulsion of Ukrainians from Britain in the survey.

Russian media are busy disseminating another fake about Ukrainian refugees, claiming that the UK has already determined when they should be “expelled” from Britain. This claim is based on a survey conducted by the British Office of National Statistics.

There is absolutely no language about an imminent “expulsion” of Ukrainians from the UK Homes for Ukraine survey. Russian propagandists once again gleaned a small amount of data from a much larger poll and presented it as their own warped conclusion.

The British Office of National Statistics surveyed 17,702 Britons who are registered in the Homes for Ukraine program through which British sponsors provide accommodation for Ukrainian refugees. The July 7-14 survey was conducted online, 41% of the program participants responded to the questionnaire. The overall goal of the survey was to compile a general portrait of those who are participating in the program and determine for how long they are ready to provide housing for Ukrainian refugees.

Russian media also manipulatively emphasize that British participants in the program do not want to continue hosting Ukrainian refugees because of the rising cost of living, and because in addition to providing housing, they are “forced” to provided additional types of assistance.

According to the survey, when asked what originally encouraged them to apply for the hosting program, a minority (10%) of all sponsors selected the £350 monthly payments as a motivation. However, “the most reported motivation for applying, by 94% of sponsors, was to help people fleeing a war zone. Around half of sponsors (51%) were motivated by having the space in their house to meet this need” the survey found. Russian media, however, chose to ignore these important details.

On July 28 the UK government announced that 100,000 Ukrainians had arrived in Britain under the Ukraine Family and Homes for Ukraine programs.

” We understand families are having to make difficult decisions to leave their homes – which is why it is important we took the time to get this right to ensure we can continue offering safety to as many Ukrainians as possible,” said UK Refugees Minister Lord Harrington.