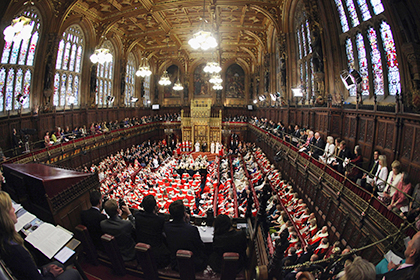 On February 20, Russia’s largest online journal, lenta.ru, published an article entitled “Members of the British Parliament Denounce Interference of the EU in the Situation in Ukraine”.

The article states: “The House of Lords EU Committee claimed that the EU and Great Britain misread the mood of the Ukrainian society before the crisis. It is said in the statement on the site of the Parliament of Great Britain that ‘the EU and indirectly Great Britain are responsible for sleepwalking into the crisis.’ According to the committee, ‘the EU member states lost political control’ of the process of negotiations about the association between Ukraine and the EU.  Coupled with Russian misjudgement of the Ukrainian government’s intentions, it led to the crisis that is undesirable both in Brussels and in Moscow. As it is claimed in the report, the mistakes were made because of the lack of expert analysts in foreign policy structures in the EU and Great Britain.”

Lenta.ru’s source is easy enough to find – presumably the report itself and the BBC website. And both refute lenta.ru’s account.

BBC cites the House of Lords report about Europe sleepwalking into the crisis, and it also mentions the lack of experts. But the report chiefly criticizes the EU for failing to appreciate the depth of Russian hostility towards the EU’s attempts to integrate Ukraine into the EU. The report also claims that Britain had not been “active or visible enough” in dealing with the situation in Ukraine, and that for too long the EU’s relationship with Moscow had been based on the “optimistic premise” that Russia was on a trajectory to becoming a democratic country. The result was a failure to appreciate the depth of Russian hostility towards the EU and Ukraine association.

Journalists also cite British Prime Minister David Cameron as saying that the blame for what has happened in Ukraine “lies absolutely squarely with Vladimir Putin and Russia.”

The parliamentary committee also reported that the United Kingdom had a particular responsibility to Ukraine because it was one of four signatories of the 1994 Budapest Memorandum, which pledged security assurances for Ukraine.