In late July, Russian and Ukrainian media falsely reported that the self-described Assembly of Bukovina Romanians in Chernivtsi had demanded autonomy and a special status for Romanians in Ukraine. This was reported by Ukraine’s Argumenty i Fakty, Kommentarii, and Russia’s Russia Today, Izvestiya and Sputnik, as well as by International Business Times.

The unconfirmed information first appeared on the obscure site, nr24.org. It was then picked up by Korrespondent, and then disseminated by dozens of media outlets.

According to the initial news, participants gathered to complain about the economic crisis, unemployment, and the impossibility of studying Romanian locally.

Dorina Chirtoace, who was identified as the assembly coordinator, allegedly proposed to establish Bukovinian autonomy within the territory of Ukraine. The motion earned unanimous support, reportedly. The article repeatedly mentioned that all decisions and resolutions would be addressed, not only to the Ukrainian authorities, but to officials in Bucharest as well.

However, StopFake has found no evidence that such a meeting or assembly ever took place in Chernivtsi. Its time and location are not known. Romanian activists in the region claim that the people mentioned in the report are not real and that their alleged demands for autonomy do not represent the position of Bukovinian Romanians.

“If such an event had happened in Chernivtsi, I would have been one of the first to know,” Vasyl Byku told the Molodyi Bukovynets newspaper. He is head of Mihai Eminescu Chernivtsi Regional Society of Romanian Culture, which has about 10,000 members. He is positive that the “activists” mentioned in the reports do not exist.


“Nobody in Bukovina knew anything about such an assembly until this media provocation appeared,” says Romanian-community representative Arkadiy Opaits, the head of the Regional League of the Human Rights and Rights of National Minorities Protection.

The claim is an informational provocation pitched to destabilize the situation in Bukovina, according to Mykola Toma, chief editor of the Romanian-language newspaper Zorile Bucovinei.

“The provocateurs try to start a made-up quarrel between the Ukrainians and Romanians in Chernivtsi Oblast. You can see very clearly the strategic hand of the Kremlin here. The conflict in Donbas was provoked along similar lines. Romanians were always tolerant. No one ever said anything about autonomy. On my part I can confirm that the Ukrainian government always supported Romanians. Being a representative of the Romanian community in Bukovina, I’ve never heard any information about violations of the rights of national minorities in Chernivtsi and its oblast. There were never repressions here on the basis of nationality.”


“This information did not appear spontaneously, but alongside provocative news in other parts of Ukraine, especially in the frontier areas,” says Serhiy Hakman, who teaches historical sciences and is a representative of the Romanian community in Bukovina. “The news appeared right after the information about the establishment of a [similar] Bessarabian Association.”

Hakman emphasizes some key details that prove that the news is a fake.

“Firstly, no one knew these people here in Chernivtsi. The name of one of the ‘activists,’ Dorina Chirtoace, is not typical for Bukovina. It is transformed from the name of the mayor of Chişinău, Dorin Chirtoacă… Next, the slogans for Romanian activities in Ukraine are usually either in Romanian, or bilingual, Romanian and Ukrainian – hardly ever solely in Ukrainian, and especially when it concerns an extreme organization striving for autonomy. In this present case, they were in Ukrainian only.”

Hakman points out one final detail. The alleged assembly refers to severnaya Bukovina (northern Bukovina), which is in fact a relic Soviet term still used by Russians. Romanians, he says, more popularly use the terms sever Bukovini or severnaya chast Bukovini.

“Moreover, I think that nowadays Ukrainian-Romanian relations are on the warmest level ever,” Hakman says. “The President of Romania unambiguously declared support for Ukrainian territorial integrity and the inviolability of Ukrainian borders.”

Chernivtsi photographer, Mykola Havka, also verified that the photo that accompanied the original nr24.org story was a fake. Using Jeffrey Exif Viewer, he determined the properties of JPEG-files and that the actual date of the photo of the “Assembly of Bukovina Romanians” was July 19, 2015, not July 27, as reported. When he sent the site a message confronting it on this, the story was simply deleted with no response. 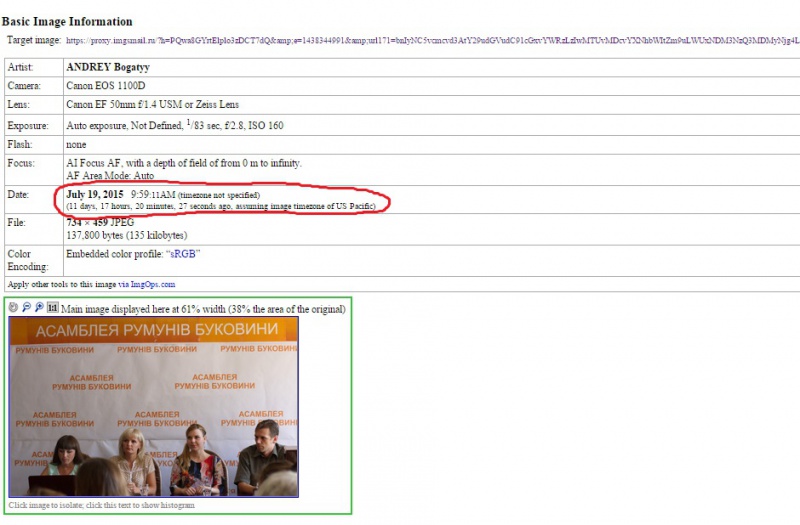 Stopfake reported on similar false information spread by Russian media in March and May concerning the alleged demands of Carpatho-Rusyns for autonomy in Ukraine.