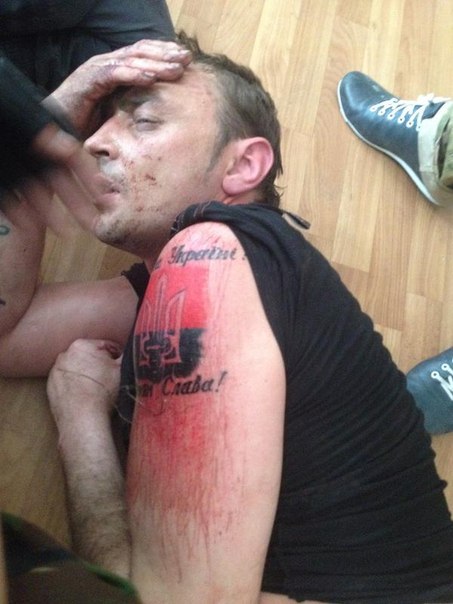 On February 2, the Russian TV channel Zvezda informed viewers that a captured Ukrainian soldier was caught attempting to scratch a tattoo off with a brick of the National Emblem of Ukraine against a red and black background. Zvezda journalists called the marking a “Banderivets* tattoo,” and said that their report’s source was a “News summary from the Novorossia militia.” A photo of the captive with the tattoo was presented as a current one.

“Before being captured, this Ukr [a pejorative term for “Ukrainian”] tried to erase his tattoo in order not to give himself away,” Zvezda then claimed on its website. The Russian channel posted the image of the captured soldier with a report on the Ukrainian soldiers that have been encircled near Debaltseve.

But the photo was in fact taken last spring and first published in October 2014.

Moreover, Zvezda has distorted the story of the man in the photo. In truth, he is Oleksandr Hurov, a miner who was captured by separatists in May 2014. According to Hurov, it was separatists who tried to wipe the tattoo off with a broken lamp when they tortured him and inflicted serious wounds.

*Bandera – Ukrainian national hero of a freedom movement during the World War II.