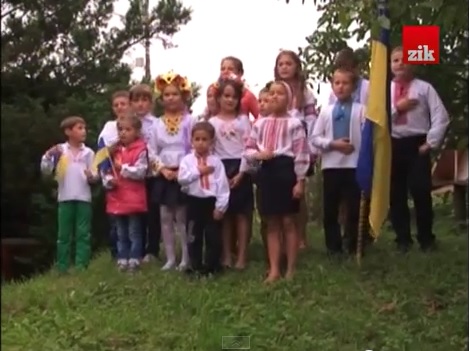 TV channel Russia 24 informed through its program Vesti that children’s combat battalion, which would fight in Donbas, was allegedly formed in Lviv region of Ukraine (starting from 1:17 of the video).

“Here, in Prykarpattia, children’s combat battalion, first in Ukraine, started to function. The headman of a village decided to draft children, serving them call-up papers. Judging by local TV reports, children are ready to fight. Their parents, being interviewed, tell that they are ready to send their babies to the front. They all are singing together the national anthem of Ukraine with a Lviv accent in this reportage”.

However, no children’s combat battalion was formed in Prykarpattia. The video for the news item about so-called combat battalion was taken from the news item of Lviv TV channel ZIK, informing about the group of children from 2 to 10 years, who had gathered in order to raise money in their village of Novytsia for Ukrainian soldiers and to give them moral support.
The village headman did not serve children call-up papers, but only presented them with an invitation to this group, jokingly referred as “battalion”. These “call-up papers” were handwritten on a plain piece of paper.

The parents did not tell that they were ready to send their children to the front. One little boy’s mother said only that his son was trying to imitate his adult friends and started to pack a backpack for the front and she did not interfere. But this in no way can mean that the mother was ready to let her baby go for a war.

Here is the complete news item of the Lviv TV channel about the children’s “battalion”.