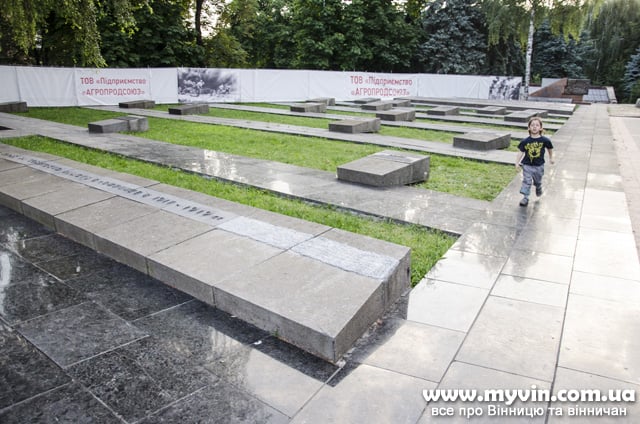 July 6 faked screenshot from “RIA Novosti” site about the Monument of Glory being dismantled appeared in Internet. The screenshot contains a photo of damaged memorial stones. Social networkers and forumers were spreading and discussing actively this “news”.

As informs the site “My Vinnytsia”, journalists were not able to find this publication in the news feed of the Russian site. “This is either a provocation or somebody’s bad joke”, believes “My Vinnytsia”.

In fact, the Monument of Glory on the European Square is being thoroughly rebuilding now. After the finishing of these works the Monuments will have the habitual form. Granite stones with names of Vinnytsia residents, who perished fighting for Vinnytsia region during the Great Patriotic War, will be totally replaced. There are also plans to renew steps and pathways and to fence off pedestrian areas with decorative flowerbeds. “Taking into account the age of the monument and the scale of destruction, minor repairs will do no good here as the stone will continue ruining”, said the director of the City Council Department of Municipal Services and Improvements Ihor Korolchuk. “But after the rebuilding it will have the usual look that Vinnytsia residents have got accustomed to. The only innovation will be decorative flowerbeds that will be placed along the pathways in order to fence off pedestrian areas and to make impossible the young people skating and cycling here. In my opinion, this is a right decision, as we should commemorate people buried here. Thanks to them we have been living all these years under a peaceful sky”. The biggest memorial in Vinnytsia was built in 1958, almost 60 years ago. Since that time the facing of granite stones with inscriptions went to decay and burial stones sagged. After the rebuilding, the memorial complex constructions won’t need a replacement for several decades. It is planned to finish the works by the end of the summer.